"So many things, so little time!"  That has been the story of my life recently.  Over the last 4 months I have been going nonstop to say the least.  I like to stay busy which I feel is a good thing.  My wife on the other hand took it up a notch by training for the Virginia Beach Shamrock Marathon over St. Patricks Day.  I had the privilege of being her training partner for the race.  In the midst of training with Amanda, I have been plugging along towards my bachelors degree at Embry Riddle.  Taking 2 classes a semester doesn't sound like much, but it can wear on your when you work full time.  Along with that I recently jumped on board with a new company in the outdoors industry called GlobalNet Outdoors (GNO). If you have never heard of it, you have to check it out! Message me for more details. With all this going on, I still managed to find time to fish.

Months turned into weeks, and weeks turned into days leading up to the Shamrock Marathon on the Sunday after St. Patricks Day.  The Saturday before the race ended up being a really nice day!  After doing some yard work, my Ocean Kayak Trident 13 was loaded in the back of the Schwigy Toyota. Time to hit one of the local lakes in search of the famed Bucket Mouth.  I only had a couple of hours to fish so I wanted to take advantage of this opportunity.  I got on the water with bluebird skies with a 10 mph wind.  I started out fishing drop offs and edges but then I realized that I was messing up.  I figured out that the bass were on their beds by seeing a couple of nice sized beds on the silty bottom.  That's when the game plan changed.  This was going to be close quarters action. The tactic was stand up sight fishing with a weightless 7" Powerworm.  After having a boat cut me off on the shoreline that I was working I still managed to get some action. The boat managed to spook the fish by getting on top of them with the trolling motor. My quiet paddle while standing up in my kayak paid off as the bass were not spooked which enabled me to cast to them without them knowing I was there. The first fish I threw at was a dandy.  The minute my Powerworm hit the bed she was on it.  I gave her the good ole' German hookset as friend Joe Bucher puts it. She thrashes on the surface with a few good head shakes and spits the bait.  It hurts watching a 5 pounder spit your lure out like it's nothing.  Oh well, on to the next...  With the sun dropping and the wind hitting the shoreline, it made spotting the beds more difficult.  The next few fish did not want any part of what I threw at them.  Right before I was about to call it a night I spotted a giant sandy spot on the dark bottom.  What do you know, a nice bass is sitting in the middle of it. The fish was playing hard to get as well.  I threw multiple casts to no avail.  I changed it up by putting on a chartreuse lizard and arching the its back to put a little funkiness in the action.  I threw it up and dragged it into the bed and started twitching the rod tip.  This time the fish was not happy and quickly got on top of it and flared her gills and made the lizard disappear.  I set the hook so hard this time I almost launched myself out of the boat.  I was finally rewarded with a nice 18 1/2" bedtime bass.  That ended a short but fun time on the water. 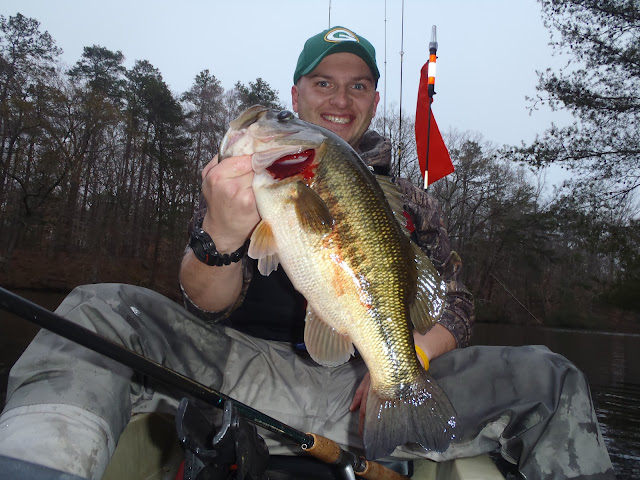 The following week blows by with the schedule of events.  Sunday was the marathon in Virginia Beach.  Congrats to my wife Amanda on completing her second marathon to date.  This was my proudest moment as a husband when I watched her cross the finish line.  It gives me goose bumps just writing this.  Monday and Tuesday entailed work and school all night.  Wednesday was school work and Thursday was my daughter's chorus concert.  A half day at work on Friday and then it was time to hit the road to head south to Savannah, Georgia for the IFA Kayak Fishing Tour redfish/trout tournament!


Friend and HOOK1 prostaffer Marty Mood picks me up at the house and we eagerly head out to the first of two IFA Kayak Fishing Tour tournaments in the Atlantic region.  We toss around some ideas and made a few phone calls and came up with a game plan.  We planned on pre-fishing a few spots on Saturday to decide where we would fish on tournament day.  The drive down was a rough one.  It seemed that Mother Nature decided that 1-95 needed a little spring time watering because we got blasted by heavy rain and lots of lightning.  Might as well get the crap weather out of the way now. I always try and take the positive approach to things.

Saturday arrives and we head out to the first of the spots for the day.  The day started out with sunny skies and low winds. We get to the launch and.. but wait, we forgot something.  I knew exactly what Marty meant when we got to the launch and he says, "SHOOT!"  Ok, maybe he did not say that but you get the point.  We forgot to order our fishing licenses that we talked about multiple times.  Good thing I had an Iphone because, "there is an app for that".  On my "Around Me" app I find the nearest bait and tackle shop which is 10 minutes away.  After the trip to the bait shop that should have never been, we finally get back to the launch with fishing licenses and 40 minutes less to fish.  The first spot we headed to was a marsh that was a maze of grassy islands and canals.  This spot was tough because unless you really knew that area, you were just fishing a spot that was the same as everywhere else.  I did manage to catch a nice 24 1/4" redfish that fought tooth and nail! 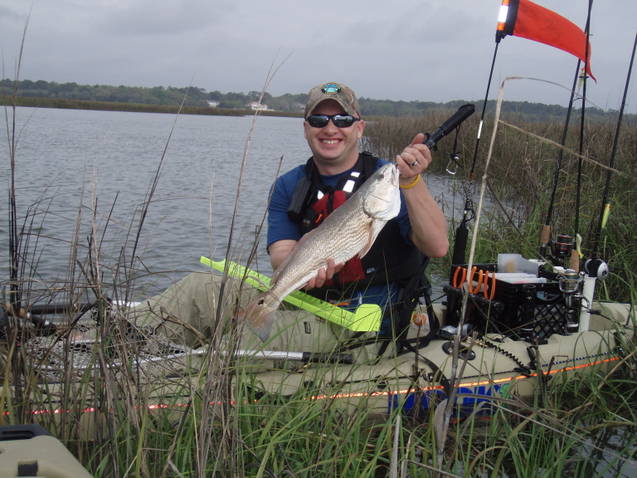 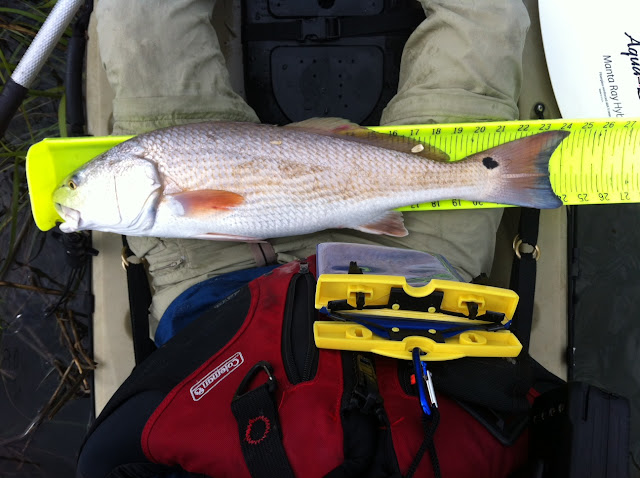 We headed to the next spot but we were beat to it.  Yup, the WIND beat us there!  It was tough fishing in this for most anglers.  Marty was laughing since he could cast and stay still in his Hobie Pro Angler and the minute that I would cast I was getting blown off the spot.  We did end up catching some small speckled trout but no reds.  We didn't fish as long as we planned because the skies darkened fast!  The day ended by being chased off the water by wind, rain, and the fisherman's best friend..Lightning! Even though we only caught one decent red and small specs, I felt pretty good going into tournament day.  The Captains Meeting later that night revealed fisherman fishing from North Carolina down to Jacksonville for this tournament.  On the ride back from the meeting we finalized our game plan and headed back to the hotel for some much needed rest

Tournament day started off at 7am around the sunrise.  We had to stop fishing at 1pm for us since we had to drive an hour back to the tournament grounds. 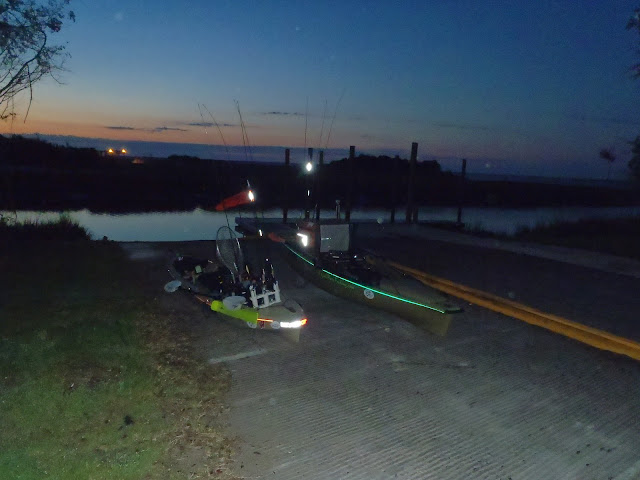 This day did not have rain in the forecast, it had sun and WIND!  When I say wind, I mean WIND from hell!  I compare this windy outing to the day the Edmund Fitzgerald sank.  Not really but you get the point.  I could not hold a spot to save my life!  I ended up fishing a stretch of shoreline protected from the wind but nothing was going on there.  Marty caught a 17" and a 21" speckled trout right away which put him off to a fast start. He needed a decent red to put him in good shape on a day like today.  With the day flying by and weather only getting worse I figured it was all or nothing.  I paddled over to an area full off old concrete pilings.  I take my anchor line and tie off inside a crazy mess of structure and hope for the best.  You knew fish were holding there with the structure, the problem was getting them out of it if you hooked up.  Not long fishing this I set the hook on a fish that had some shoulders.  With a quick flash of red it was off to the races.  I thought my drag was going to burn up!  I couldn't get his head turned.  This fish was strong as an ox!  It felt nothing like the red I caught the day before.  After peeling line it gets wrapped in the pilings. That was all she wrote on that one.  I don't even want to know how big this fish was!  After a few choice words I regrouped and got back in the game.  I moved a few rows over in this piling field.  Mind you I'm in the middle of this.  The wind is beating me around in here like I'm the ball in a pin ball game!  I switch out the medium rod for the medium heavy rod and crank down the drag.  If I hooked up again it was either rip the hook out of its mouth or I am going to horse the fish in.  I did not want to get in the pilings again.  After zoning out I feel my 6" Gulp Jerk Shad stop, reflexes kick in as I try to un-ass the fishes jaw.  I see the side and knew it was a decent red.  No drag pulling here, I was in control.  After a quick but violent fight, a nice 25 3/4" redfish! I'm on the board! 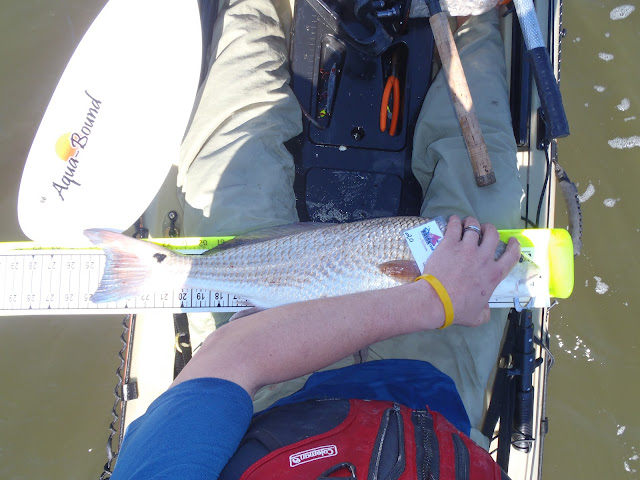 The wind picked up to the point that Marty was having an issue in it with his Hobie. Marty did pick up a 23 3/4" red to get him his slam.  I figured with a day like today that he had a good chance at winning this.  We made the call to head back to the launch area that was out of the wind to fish a good sized dock with a small grass flat nearby.  As time ticked away we called it a day and packed up and headed back to submit our fish.  After talking to a lot of people that struggled, we felt pretty good.  I was happy to put something on the board for my first redfish tournament.  Times up and the result are in.... When the second place finisher was announced we knew Marty had it!  Marty Mood wins the tournament and Big Trout!!  Great Job Marty!!! Since I didn't get a trout but caught a nice red, I finished 7th overall, not too bad! Click here for the tournament standings. 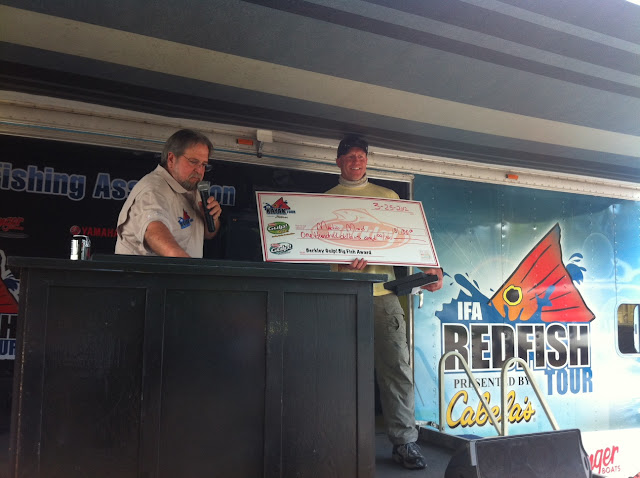 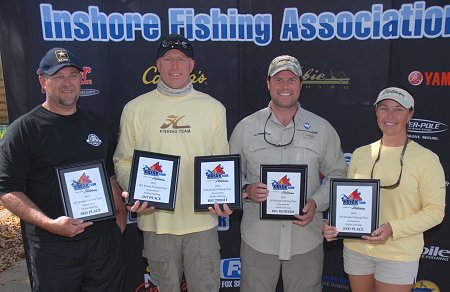 The drive back to Virginia was long but it was worth it.  I was pleased with my finish and extremely happy for Marty winning the whole thing.  The two guys from Virginia managed a 1st and 7th place finish which is pretty good in any tournament.  Next IFA tournament is in Charleston, South Carolina in June.   Hopefully our next showing is 1st and 2nd places. I had a great time fishing  fishing in Georgia but a better time fishing with a good buddy!  "ShidnaLaneer Bridge", you had to be there.