Walking the Dog on Easter Weekend

There are two types of fishing excursions; planned and unplanned.  Most of the time, the unplanned trips are the ones that can stick out in your memory bank.  My Easter weekend started out like most other family guys would start.  After work on Friday, I met my wife at the grocery store to do a little Easter dinner shopping. We also once again took on the role of the “Easter Bunny” making sure that our daughter has plenty of opportunities to make new cavities with the plethora of delicious sweets! Saturday was spent at Busch Gardens riding the coasters and making sure the girls had fun.  Once the fun in sun at the theme park was over, it was time to visit my friend/co-worker in the hospital.  This week my friend Les was diagnosed with an evil disease named cancer.  Doctors found it in his stomach and are taking no chances.  He was admitted immediately to Portsmouth Naval Medical Center for his long process of treatment and recovery. I figured since I was going to see him Saturday evening that it would be fitting to tote along the Trident 13 so I could get an hour or two at the Elizabeth River.  I’m already all the way in Portsmouth, why wouldn’t I bring the yak?
I met our friend Bobby at the hospital so we could hang out with Les. It sucks seeing your buddy hooked up to bags of fluid and confined to a floor in a hospital.  One thing though, if there is one person who can come out swinging and defeat this monster, it’s Les!  After our visit, it was off to the Elizabeth River for some night time speckled trout action.
I hit the water around 9pm and planned on fishing until 11pm or so.  This night was a lot nicer than the last time I was out.  It was in the upper 50s with no wind, clear skies, and a strong incoming tide!   It was time to take the dog for walk. I figured I would try top water to entice blow ups from some hungry specs.  I started working a flooded shoreline with a dark Mirromullet.  About 5 minutes into it, I get my first blow up.  The fish missed it, but at least I had possible taker.  I rounded a point and casted parallel to the grass edge when I noticed another kayaker.  I was concentrating on the other kayaker when it seemed like my bait triggered a landmine!  The minute I heard the explosion, I felt dead weight.  I love top water action because that’s when instinct took over, not because of the sound but because of the weight.  I got in a good hook set and now it’s “FISH ON!”  I battled this fish pretty good for what seemed like minutes.  I get it to about 5 feet from the boat when the fish makes a solid deep run…and comes un-buttoned!  Crap, my drag was smoked all the way down!  This time it was my mistake, I didn’t back the drag off any.  My old musky fishing skills should have taken over but I took this fish for granted.  I would love to say I had a citation on, but I never saw the fish.  I could tell that this fish was heavy and had a good set of shoulders.  Oh well, that’s fishing.
The remaining hour left in my budgeted fishing plan had the same action.  Many blow ups, but smaller fish.  One fish decided that he was a patriot missile.  Less than 10 feet from the boat a 15” spec shoots out of the water about 2 feet in the air with a mouth full of Mirromullet.  Nothing makes your heart skip a couple of beats when you get a serious blow up that you can see at night.  I ended the night with a half dozen specs that ranged from 12” – 17”.  All the fish were released to spend the next day Easter egg hunting with their families. I hated leaving the fish biting but I promised myself that I would not be a zombie on Easter Sunday. Here is the 17": 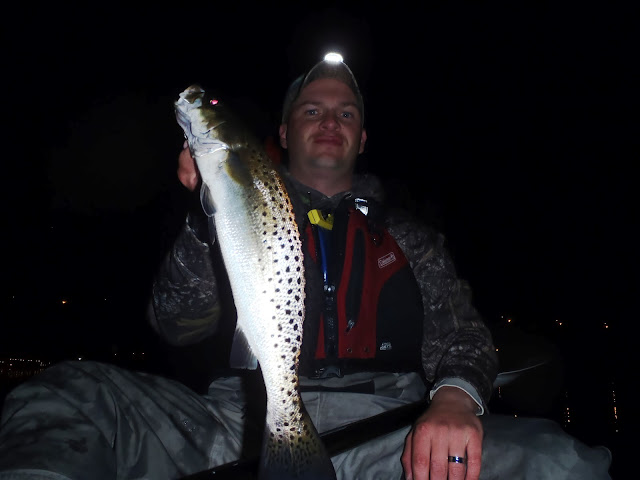 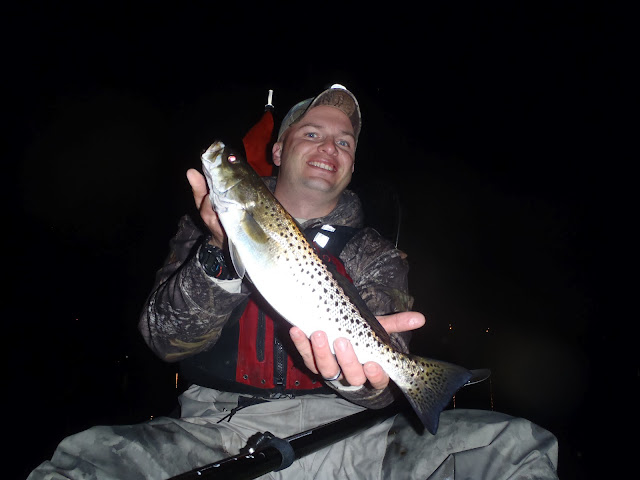 Most planned fishing trips include fishing partners and a game plan strategy. The little unexpected trips can sometimes be the most relaxing and rewarding because most of the time it’s just you, the water, and hopefully the fish.  On a night with a bright moon, flat water, and kamikaze trout, it can be hard to beat.  Yes I did not boat a ton of big fish, but I had a relaxing time on the water counting my blessings that God has given me.   I’m blessed with good friends, a loving family, and the ability to fish at will.  I’m also inspired by the drive and will power of other people.  Les is going to defeat this cancer because he is strong and will not let it get the best of him.  He has the thoughts and prayers of many on his side, along with the constant care from the big guy upstairs!  Get well soon Les!
Happy Easter Everyone.
See ya on the water!