Being a very competitive person and one who loves to kayak fish, it just seems that kayak fishing tournaments goes hand in hand.  Tournament fishing adds a whole different element to a world that many people have yet to experience.  I take kayak fishing as serious as anyone out there.  Sometimes I think it's what drives decisions in my life.  So when I got a call back in March from my friend Marty Mood to join him in the 2012 IFA Kayak Fishing Tour, my answer was obvious, "Hell Yeah!"

For the IFA Kayak Fishing Tour, there are six divisions with two events for each separate division. There are also three regional events.  In order to fish one of the regional events, you need to fish at least two of the regular season division events. When you fish the two regular season events and one regional event, you are then eligible to fish in the 2 day Championship. You also build up points with where you place in each event. The entire set of rules and information can be found and the IFA site, click here.

Our plan for this year was to fish the two events in the Atlantic Division: Savannah, Georgia and Charleston, South Carolina. The Savannah event was back in March which was our first one of the year.  We started off in a good way by Marty taking 1st and myself taking 7th. The results for that event can be found here, Savannah results.

Expectations were high leading up to the last Atlantic event of the year in Charleston. The plan for the weekend was relatively the same as the last trip: Leave Friday afternoon, check into the hotel late that night, pre-fish all day Saturday, tournament on Sunday, then drive home after the photo weigh in. The drive there is always enjoyable. You talk fishing like what baits each other are using, tide movements, weather, and most of all, strategy! For those that have tournament fished before know what I am talking about when I mention strategy. If you have never fished a tournament before, picture it as a weekend long chess match.


Once we checked into the hotel and got settled in, it was time to map out our game plan.  We both fired up our laptops and reviewed weather sites, tidal movements, local maps, and Google Earth.  Marty already had some inside info from Hobie Pro and local guide Justin Carter. If you are fishing an area that you have never fished before, I cannot stress enough the importance of doing your homework!! You can learn so much by doing three things: First check out the weather like winds, precipitation, barometric pressure changes, and temperature. Next is finding out the tidal movements.  "When is low tide, high tide, is it a flood tide, what is the fluctuation in tides??" These are all questions that you need to ask yourself.  Finally take all the weather and tidal information and check out maps and Google Earth to dissect your planned out fishing area.  With the information that we just talked about, you may find that your pre-determined area might change.  Once you have compiled all your data and incorporated it into your review of maps and Google Earth, you have come up with your own strategy. I could keep going on and on like lure color and selection, rod choices, what gear to pack, gathering local intel, etc.  We will save that for another write up in the future...


Our pre-fish day started bright and early Saturday morning.  We met Justin Carter at the gas station before we headed to the launch.  It sure was nice having Justin joining us since he knew all the spots like the back of his hand.  Our plan was to hit a couple of spots right away in search of some reds and trout before heading way out in search of big trout.  The first spots yielded no fish so we headed way out to a group of islands.  We fished a deep trough between a flat and the island itself.  In no time I had a solid thump on an electric chicken Mirrolure.  I got a quick glance of a 3 foot fish and thought I hooked into a nice red.  After multiple drag screaming runs, I finally get the fish to the surface to see that instead of a red it was a shark! 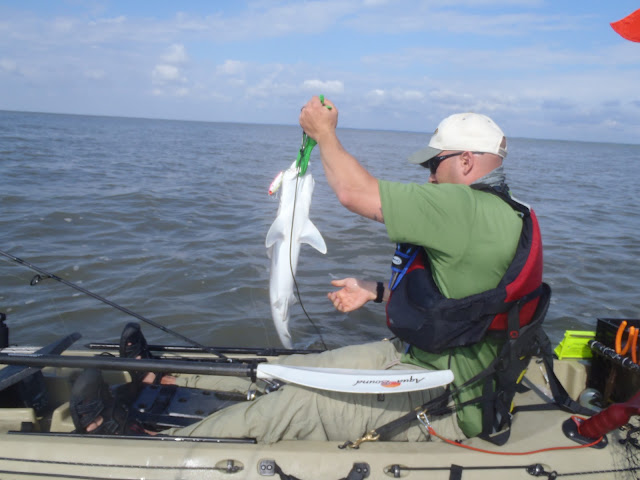 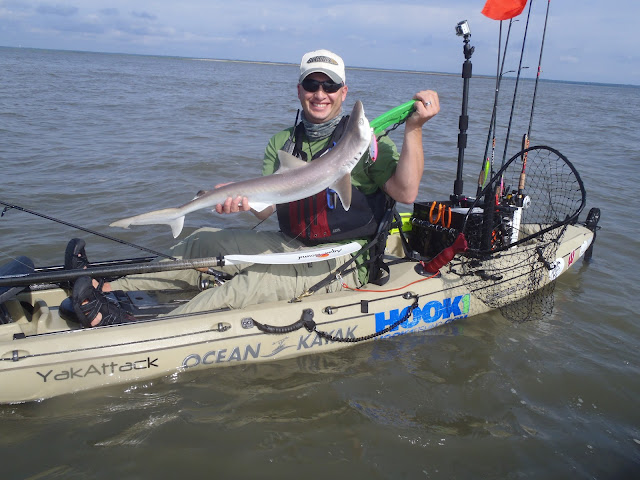 After the shark we headed to a group of small islands to find the current ripping down the edge of a good sized oyster bar.  That spot was the ticket for trout.  We all caught multiple trout and decided to leave them biting so we could come back the next day for the tournament.  Now that we found our trout spot, it was time to search for reds. It took us a little while but we finally ran into a pod of reds busting on baitfish in about 1 foot of water.  The problem was that the water was so muddy from all the boat traffic that you could not see more than 3 inches down.  It took a few minutes but I finally convinced a red to engulf a 6" chartreuse Gulp jerk shad. This one went 28 1/2". 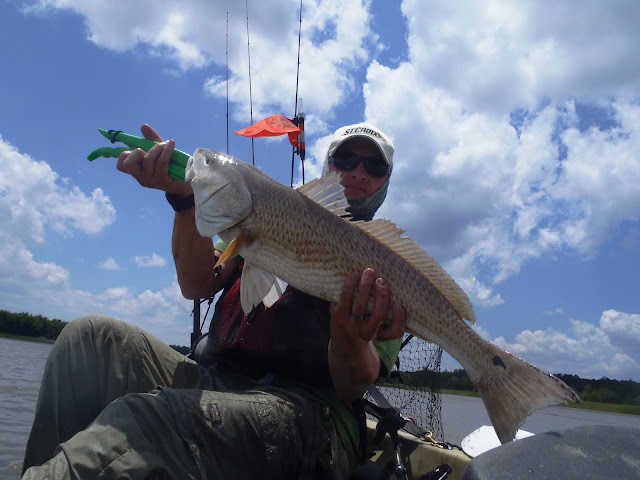 That was all we could come up with that day.  We put on well over 8 miles in strong current in the hot sun.  We were beat to say the least! The captains meeting that night showed many familiar faces from the Savannah tournament. Pros from Hobie, Wilderness Systems, Jackson, Native, and Malibu were all there. It was great seeing the same guys again along with meeting new ones.

After the captains meeting it was back to the hotel.  We came up with our game plan that was like a football coach's playbook for the super bowl.  Needless to say, we were prepared for tournament day. 4am came pretty quick and then it was off to the launch.  Our plan was to head out to the trout spot that was around 3 miles away from the launch.  On our way we would be on the lookout for reds tucked into the grass.  Sure enough, not long after leaving the launch we spotted a couple of reds busting bait in less than a foot of water.  It didn't take long for Marty to hook up.  As soon as the fish was on and made the first run, he got off.  The nice red went for the thickest grass to hang up in and spit the hook.  Bummer! Time to move on in search for more. We didn't find any more reds before we got to our trout spot.  Just like clockwork, the trout were in the current and feeding!  We caught trout right away and kept catching them until we felt like we had fish big enough to compete. After catching double digits numbers a piece in 30 minutes, we left with Marty topping out at 18 1/2" and my 18 1/4". Time to find redfish!


The paddle back into the current was miserable to say the least!  We finally made it to the section of water where we going to go after reds.  Fish were not visible so we hit structure like grass edges, docks, and oyster bars. It seemed like minutes were going by like seconds!  We could not seem to find or hook up any redfish and we were running out of time!  Finally I hear Marty say, "Redfish, a bunch of em!"  Marty staked out where I caught my red the day prior.  Just like you would hope, they showed back up.  The only problem was now we have a time limit! The reds quickly dispersed around our boats and were almost impossible to see.  We did know that all the fish were nice! Unlike the day prior, we had no takers and time ran out on us.  We needed to get back to the weigh in so we could register our trout.


After the mad dash to the launch and the weigh in, we get in line at 2:57pm with the deadline being at 3:00pm. We find out from multiple anglers that most people had a rough day on the water.  Boy, leaving those reds are really starting to hurt!  The results are in and the winner was Dolphin Hamilton with a 26" red and a 15 1/2" trout.  The cool thing was Marty won "Big Trout" with his fish which earned him a plaque and a little bit of cash.  I was a 1/4" away, man! Good job Marty! Here is the link to the results.

A big thanks to Justin Carter for the intel and putting us on fish.  If you want to catch redfish, speckled trout, flounder, or whatever swims inshore in South Carolina, give Justin a call and book a trip with him. You won't be disapointed. Click here for his information.


If you love to kayak fish and have a competitive spirit, then you need to try a tournament if have not done so already.  You may not need to travel hundreds of miles to find one.  Many places and organizations have local tournaments and monthly mini-tournaments.  One thing is for certain though, they're addicting!!  When you come close to placing in the money or winning it all, it inspires you for the next one. Check out the IFA page if you're interested in fishing the tour. You may find that the IFA is something that you may want to be a part of.  It's a great time with great people!


Now that we have completed the Atlantic Division, it's on to the Regional event in Titusville, Florida in late August. That is where I hope to get my first IFA win. Until then, it's back to the drawing board doing my homework on a new spot.  That's half the fun, isn't it?