BEEP BEEP BEEP BEEP!! Yup, we all know that lovely sound.  The dreaded sound of the alarm clock going off.  Only this time it was not going for work, but something just a little bit better.  It wasn't even set to go fishing.  I had my alarm set a 5am on a Saturday to fire up my smoker for a big ole' Boston butt.  For those that don't know what a Boston butt is, it's the arse of a pig.  That's where you get the delicious pulled pork from! My wife and I decided to have some friends over for a bbq, a couple beers, and some corn hole (bean bag toss).

I was going to put the pork butt on the smoker and go back to sleep but the weather at 5:30am was way to nice too pass up!  I was like, "My smoker is propane, I can set it and forget it!" I knew I would be good to go as long as I made it back before 1pm.  I made the call then and there to grab the fishing gear and head out to one of my trout spots. Within 10 minutes I was on the road forming a game plan in my head.  I checked my ScoutLook FishLog App on my Iphone to check the wind and the tides so I could decide which spot to head to first. If you don't have the ScoutLook app on your phone, you should really check it out.  It has everything from radar, hourly forecasts, tides, saved locations, fish markers, etc.  It's an awesome tool to have at your finger tips.

The plan was to paddle out to my farthest spot and work the incoming tide towards some other spots.  I fished a big flat with everything from a Super Spook, Mirrolure TT, Mirrodine, and a paddle tail to no avail. I however did see plenty of rays surfacing and playing around. While paddling to my next spot I noticed a big group of birds busting on baitfish.  Once I got to the boiling water it was game on with little bluefish.  There were hundreds of bluefish and houndfish working over the bait.  I figured I would put on a 3/8 oz jig tipped with a 4" Gotcha and work the edges of the bait school.  Doing that I managed to pull in a 14" trout.

Once I was done with that I decided to do a couple of drifts along another flat before I had to pack it in.  The sun was getting pretty high and warm around 10am.  I decided to drift the drop off and cast into the flat and work the bait towards the deeper water. I threw a few casts with a Mirrolure and picked up a 15" right away.  No picture for him, I did'nt want to waste time. I figured that I would try some top water. It only took around a dozen casts before a hungry 17" trout smashed my Super Spook. 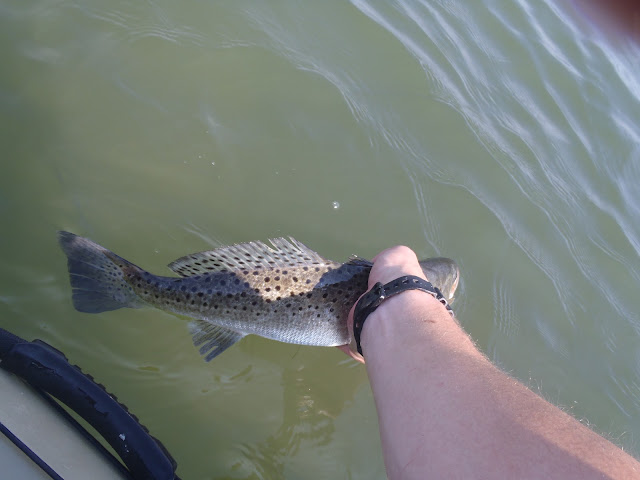 Nothing like a good top water blow up to get your blood pumping.  After a couple of photos, it was back to fishing.  I knew I had to call it around 11:30 so I could paddle back, pack up, and check my smoker to make sure that I didn't make my pork into a brick of charcoal.  I didn't have a lot of time left so I hoped I could pick up at least one more on top water.  I paddled back up to where I caught the fish and started the drift again.  Not 10 casts later, SMASH!  The second I set the hook I knew I had on a nicer fish.  After a couple drag pulling runs I had a nice 22" trout in the boat! 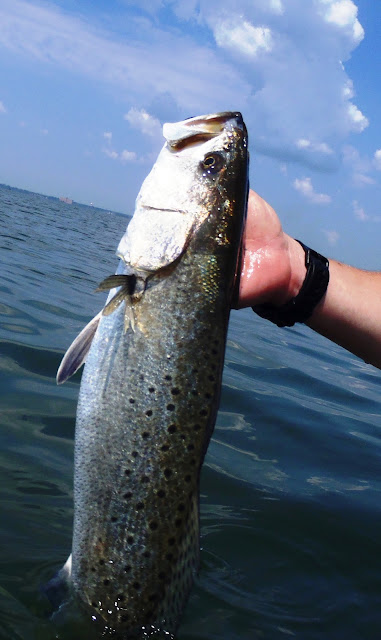 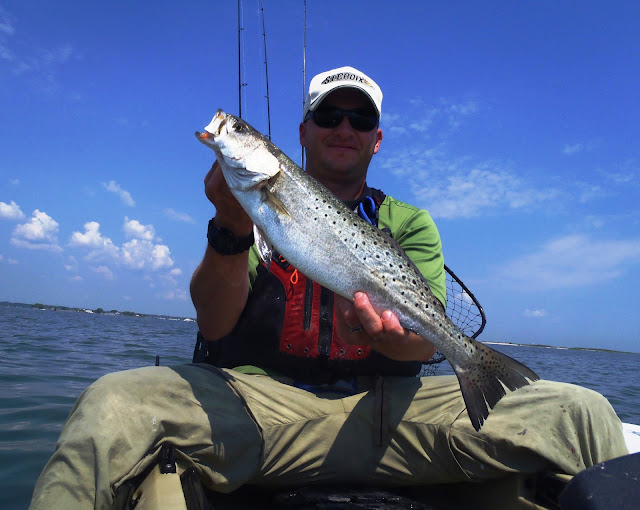 Once again, a few photos later and it was off to try and peg another fish. I only had about 5 minutes left before I had to call it a day.  It didn't take long before I set the hook into another fish.  This time the fish felt different.  Sure enough, I finally hooked into a houndfish.  I knew it wasn't a trout due to the drag burning runs the long skinny body on the surface. After posing with the possessed houndfish, it was time to head back home to tend to the bbq. Boy oh Boy, what a tasty time that was! Nothing like hanging out with some friends, food, beverages, and games on a nice summer day. 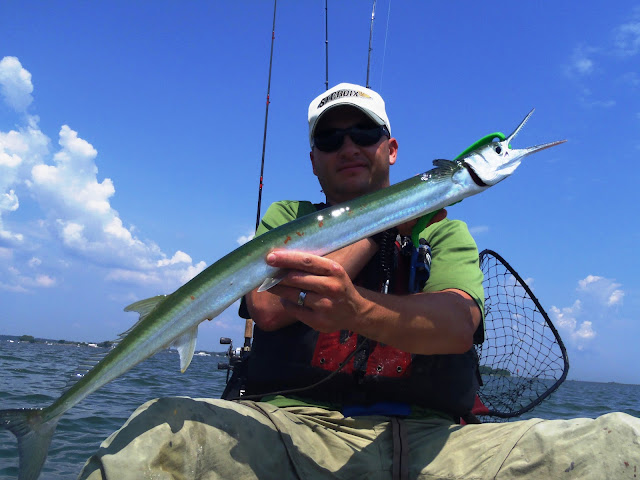 A couple of days later it was time to hit the trout waters again.  This time I was going to be joined by Hobie Pro and Hook 1 prostaffer Marty Mood (PA hillbilly﻿).  It was cool to fish again with Marty since he has a crazy schedule due to moving this July. We decided to try a spot closer to home so we could get more time on the water.  We launched to beautiful weather, 5 knot NW wind, and the bottom of the low tide.  Both of us figured it would be fairly slow until the tide started to come in.  Well, we were right. There was not much going on for the first hour other than houndfish everywhere. We were throwing different baits from top water, sub-surface, and paddle tails to see if we could convince some trout to eat. 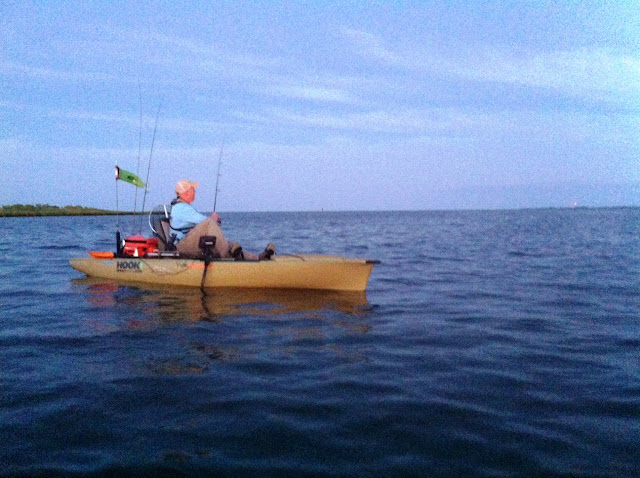 The first signs of trout life didn't appear until the sun dropped and the tide started moving. Marty had a blow up on his top water and a short time later I had a trout explode on my top water about one foot off my bow.  No hook ups, but at least the fish were starting to move a little.  As we moved down our spot I could hear an explosion on Marty's Skitter Walk which was a good 50 yards away from me.  You could tell this fish was nice.  The fish missed it but came back for it a few seconds later with an even louder strike.  This time the fish hit the target, FISH ON!  Once the fish got to the boat and thrashed around, Marty went for the net job.  Murphy's Law was in full effect on this one, "Anything that can go wrong, will go wrong." Well, the bait was hanging out of the trout's mouth with treble hooks exposed.  You can see where this is going. The exposed hook snagged the front of the net with the fish hanging out.  After a few violent head shakes, the fish used the leverage from the net and came un-buttoned.  "There went a citation!" Marty said the fish was easily around 25"-26".  I could tell just from the strikes and the fight that it was not a 16" trout. Oh well, that's fishing. A short time later, I had strike that was much wimpier than Marty's.  No net need for this 14" trout. ﻿Just as fast as the action started, it shut down.  We couldn't buy another fish!  It was time to call it a night. 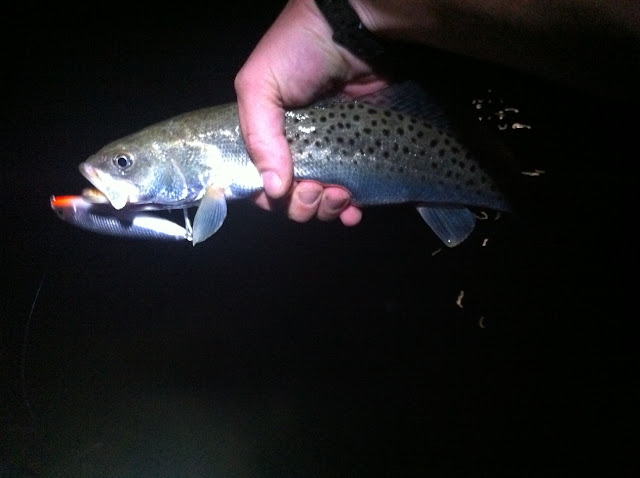 All in all, it was a great time on the water.  Both days were not great as far as fish catching is concerned. The weather was nice, I didn't get skunked, and I was able to fish with a buddy that doesn't have many Virginia fishing trips left.  SUNSPOTS! We will get him next time Marty! Now it's time to head up to Wisconsin for a much needed week long vacation.  ﻿Until next time...