One Week..5 Species..Send Off To a Good Friend

When you work for Uncle Sam, one of the perks is accruing 30 days of leave per year.  Since I have been in the Air Force over 10 years now, I have managed to save up around 70 days of paid vacation time. So needless to say, taking a full work week off would not kill my vacation bank!  I had a genius plan as well...Take a week off, and fish every day! Pretty simple, but yet brilliant. To figure out where I would fish was a different story. I put in a lot of thought on where, when, and how I would successfully catch fish each and every time. That thought process consisted of reviewing ScoutLook Weather every day for weather forecasts and tide times, checking current charts, and lastly...THINKING POSITIVE!

If I wrote a detailed summary of every outing of this week, I would be able to compete with the authors of the New York Times Bestsellers list. I didn't have time to write separate posts either since it was basically eat, sleep, fish, repeat... So I will just leave out all the little details and get down to the meat and potatoes. I had two missions for the week: First one was to fish the Chesapeake Bay Bridge Tunnel (CBBT) and the second one was to hit some spots close to home and catch as many trout as I could.

First stop of my weeklong tour was the CBBT. Since my last outing with Rob Choi and PhillyJoe, I have been constantly day dreaming of all the fish that lurk around the structure of the CBBT.  You never know what you're going to catch when you fish this place.  After checking all the forecasts and weather data, I decided that Monday would be my best chance to fish the CBBT.  The rest of the week had higher winds to match with strong currents.  Monday's current was strong, but the winds were calm.  I headed out with PhillyJoe this time to target spadefish and sheepshead.  We hit the spots that I planned on and did fairly well.  The spadefish were out again in full force!

Joe and I wore out the spades for a couple of hours. Joe's 15" was the big one of the day.  Not like we didn't have other chances at bigger fish. Both of us dropped fish just as big if not bigger. A 15" or bigger will put your gear to the test.  Hooking into these fish on my 7' medium bass rod feels like I hooked into a 40" musky! After playing around with spadefish, we headed to the first island. Not much going on here this day.  We finished off the day with some black sea bass, croaker, and trigger fish.

Next stop on the kayak fishing vacation was my local speckled trout waters.  I would have to say that speckled trout are one of my favorite fish to target in Virginia.  Probably because you can catch them with different presentations, including my favorite...Top Water!! With that being said, I will sum up my trout outings into one. I planned on fishing Back River and trying some new spots.  Back River has a little bit of everything for the speckled trout angler.  You have inlets, creeks, pier pilings, flats, grass edges, etc.  The challenge for the entire week was figuring out how to beat the wind. Every morning I would sit in my truck in the driveway at 5am, sip on a cup of coffee, and check my ScoutLook app for the latest weather conditions.  That is when I would decide which launch I would use and which spot I would fish based off the wind and tidal movements. Putting in that little extra effort paid off for the week, including the Friday before.

I fished for speckled trout last Friday, Tuesday, Wednesday, and Thursday and did not get skunked any of the trips even though the winds were 12-17 knots every day. I tried to keep things simple. Find schools of bait and try to match the hatch.  There are finger mullet everywhere! I only threw lures that had some sort of silver pattern with some little variation. I stuck with two styles of lures, top water and twitch baits.  I threw black/silver Skitter Walks and Super Spooks for top water and mullet patterned TT Mirrolures and X-Large Mirrodines. All lures worked, but I had better luck with the top water bite.   I believe top water prevailed due to the dirtiness of the water. When the wind was blowing at 15+ knots, the soft bottom churned up which produced water with poor clarity. The built in rattle chambers in the top water lures really "call" the fish with vibration and sound instead of sight. When the water was at its cleanest is when the twitch baits worked the best.  All in all, I ended the week with hooking up with 15+ speckled trout all between 15"-21.5". Not a lot of fish given the number of days, but not too bad with the given weather conditions. I also caught some aggressive little puppy drum. It's a good sign when a 10" puppy drum smashes your skitter walk. All fish caught this week were released to fight another day. Here is a week's worth of pictures: 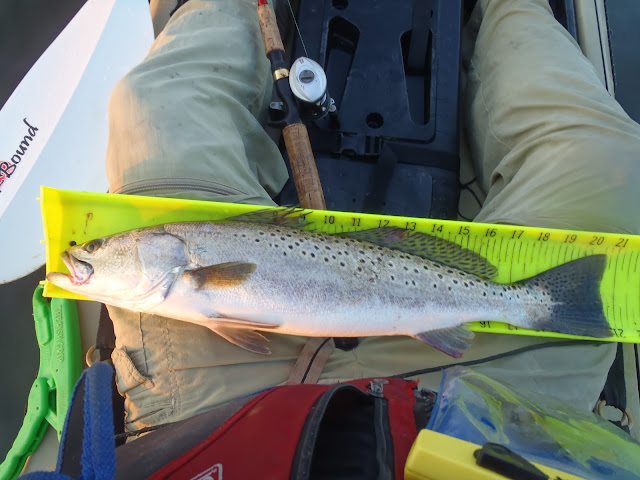 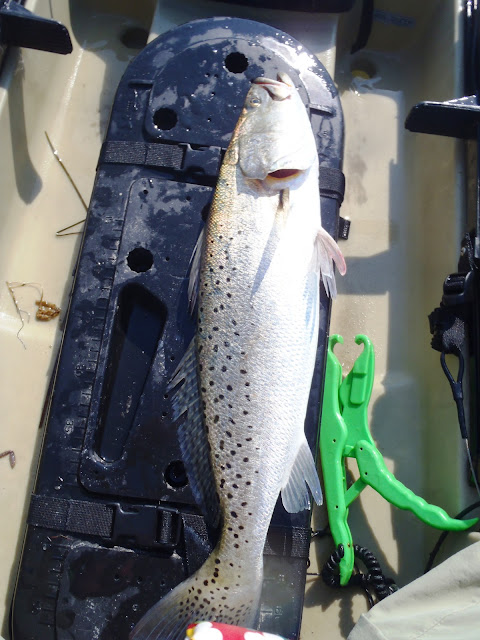 The last day of my fishing vacation ended two things.  First it was the end to my week long fishing adventure and lastly it was the last time hitting the Virginia waters with my good friend Marty Mood. This was Marty's last time to fish in Virginia since Uncle Sam decided to move him and his family to Pensacola, Florida. It's never a cool thing to have a fishing buddy move out of state.  Oh well, that's life in the military. We decided to fish between 4am-7am in 13-18 knot SW winds to send him off.  We would have not have fished this any normally, but since it was his last day here we decided to make the best of it.  It was worth it since we both caught fish over 20". 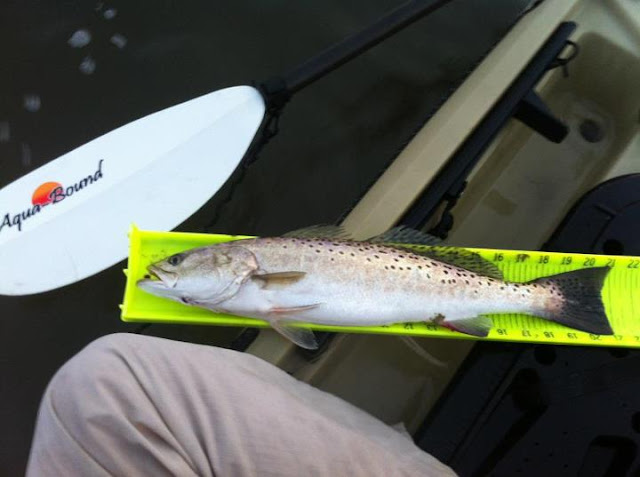 Good luck to Marty and his family as they embark on a new chapter. I guess him moving to Pensacola gives me an excuse to fish the Gulf of Mexico. I plan on joining up again for the Regional event for the IFA Kayak tournament series in Titusville, Florida.

All in all, it was a good day and a great week! Not only did I manage to catch a few fish throughout the week, I gained priceless knowledge.  You can read magazines, internet articles, blog posts, watch all the tv shows, but the best thing you can do is get out an get the "on the water experience". I consider every time on the water as "on the job training" and a "hands on lesson", not just a few hours to go fishing. You can learn something every single time you head out if you put your mind to it. Yes, the dog days of summer are upon us. That doesn't mean that the fish cannot be caught. Change tactics up if things are not working, have an open mind, be persistent, and go get on em!