Spades, Triggers, and Specks Oh My!

The best thing about living in the Chesapeake Bay region for a kayak fisherman is the plethora of species of fish to target.  This is really the case in the summer months in Tidewater Virginia. During this time of year you can catch flounder, speckled trout, red drum, black drum, striper, cobia, sheepshead, triggerfish, and spadefish to name a few.  The hard part though for some anglers like me is deciding what species to actually target. Heck, I would love to catch them all at the same time, but there is not enough time in a day.

With the weather finally cooperating on Thursday, I decided to head out to a couple of spots at Back River for some evening speckled trout action. I was joined by my friend Bobby on this occasion.  We headed out to east winds at 13mph with an outgoing tide.  It took a little time for the wind to die down as the sun was setting.  It didn't take long to entice some hungry specks on top water.  The evening bite was steady with strikes and fish in the boat.  All in all, I ended up with 5 trout between 16" and 21.5". 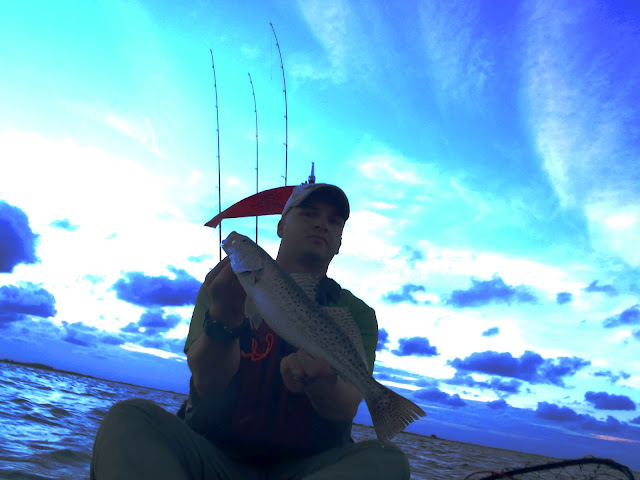 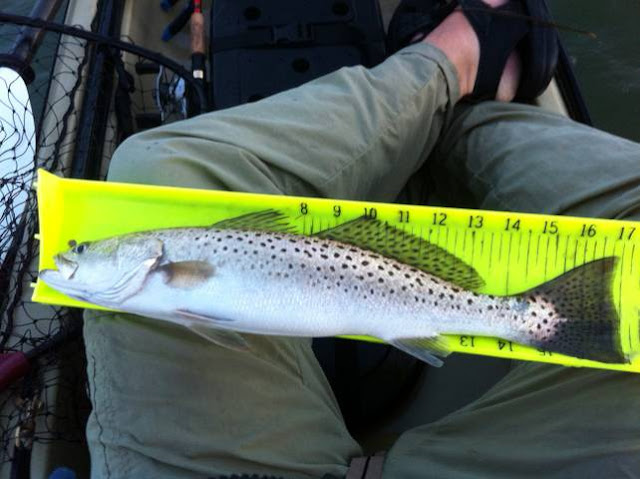 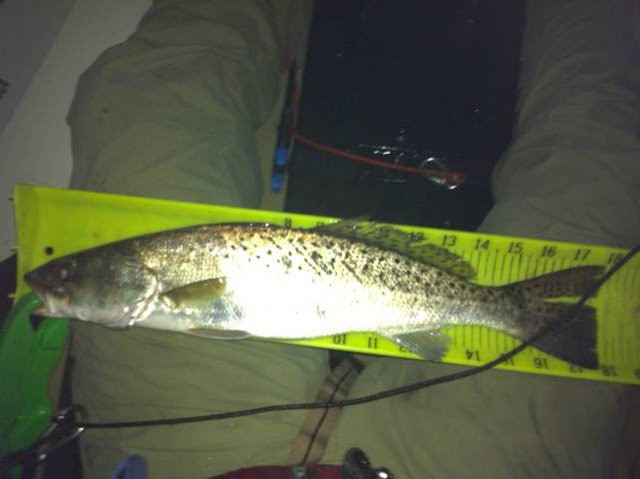 It wasn't a "speck-tacular" night by any means, but I would consider it a good time on the water.  What worked on this outing were a couple of different presentations:  I made controlled drifts in shallow water using the tide and wind to my advantage.  I switched between a Skitter Walk "walk the dog" lure and a "wake" bait that swims just below the surface. I slowed up my retrieve once the sun started to set.  I do this so the fish can zero in on the sound and vibration of the lure. I believe that you will get more hook ups and less strike and misses. I'm still after a summer time citation trout! I have a feeling she's just trying my patience...

Next up for the weekend was the laundry list of species at the Chesapeake Bay Bridge Tunnel (CBBT). This trip I was fishing with friends PhillyJoe and Ocean Kayak pro-staffer Rob Choi. We all met at Oceans East before we headed out at sunrise.  The game plan was fairly simple...Get fiddler crabs and clams, and go after sheepshead and spadefish and anything else that was hungry! Rob had a pretty good game plan since he knows the CBBT like his own backyard.  We launched to near perfect conditions: Very light wind, partly cloudy skies, and low incoming current. 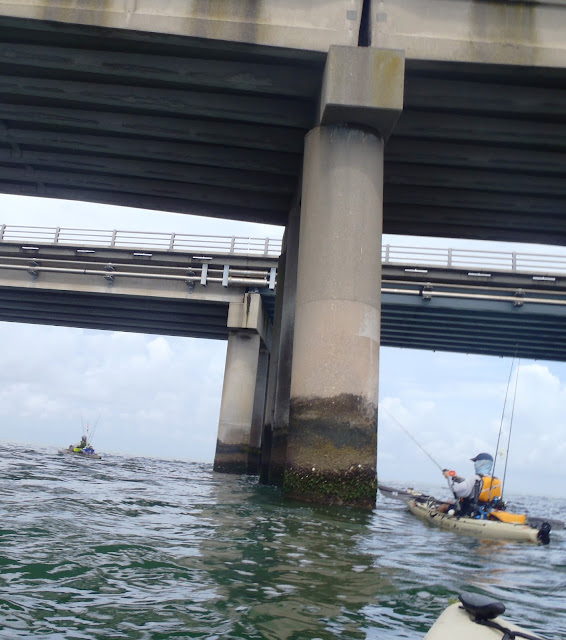 We started out by dropping fiddler crabs next to pilings, but to no avail.  Next spot was dropping clam tipped jigs for spadefish.  The spades were there, but they were finicky!  I had a couple of hook ups, but those resulted in getting broke off on the piling and coming un-buttoned.  We kept that spot in mind and headed to another spot to go hunt for some sheepshead.  The first dropped crab yielded Rob an aggressive triggerfish.  I then dropped down the same pilling to follow suit.  I barely could engage my reel by the time I had a triggerfish on the other end.  After a few drag pulling runs, I was rewarded with this guy. 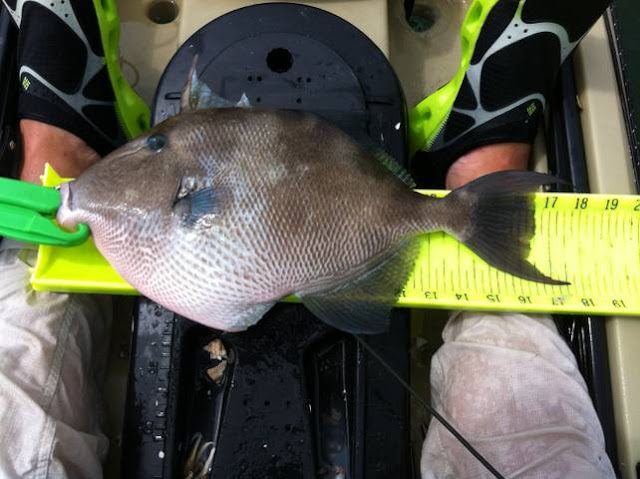 We continued to work different pilings looking for sheepshead but could not connect.  We ended up running into Aqua Bound pro-staffer Matt Anderson and watched him connect with a big sheepie!  You could tell the minute that he set the hook that it was something with shoulders.  Just as you know it, as he gets the citation sized sheepshead to the boat...The sheep comes unbottoned! I'm sure you can imagine what was going through Matt's mind at the time.  That is a terrible feeling, but sooner or later it will happen to all of us. We picked that spot apart and caught triggerfish, baby sea bass, small tautog, and the lovely oyster toad.

Time was drawing down and we decided to hit our spadefish spot on our way back to the beach.  It was just as we left them.  They were there and this time they were not as picky.  Within seconds on the first drop I had a hungry spadefish jolt the end of my line.  This time the fish did not break me off or come un-buttoned. 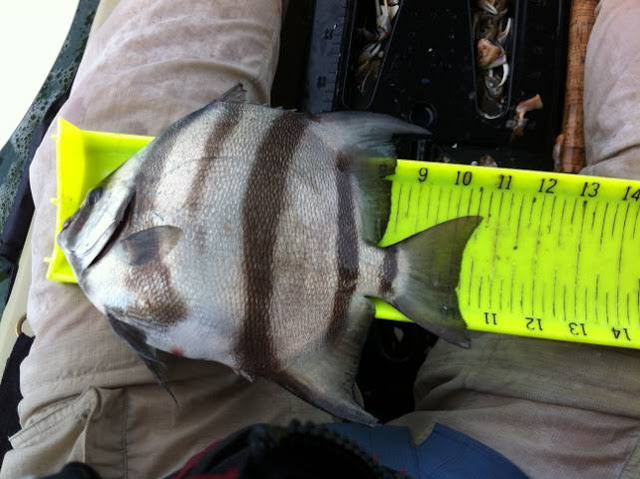 If you have not felt the fight of a spadefish, you don't know what you're missing.  Inch for inch, these fish fight to the death! It's amazing the strength that is stored in this fish! Not seconds after I release the fish, the wind picks up.  Not only does the wind pick up, so does the waves.  In minutes we had a storm barreling down on us and it was time to pack it in.  The paddle back was long and rough! Thank God we got off the water when we did because the weather turned fast!  Small water craft advisory with thunderstorms, 45 mph winds, and hail! We called it a day just in time to pack up and hit the road before the storm rolled in.  It was great day on the water, especially with the company of guys like Rob, Joe, and Matt.  It won't be long until I'm back again at the beach at daybreak ready to take on the summer species at the CBBT!