With light winds, moving tides, and the urge to hook up with some speckled trout, an idea popped into my head...Fish before work and try to make the best of an hour or so being on the water. I didn't have to go into work until 9:30 so I figured I could pull it off: Fish until 7:30, head to house to get ready, drop off Munchkin at day care, and get to work...Sounds good to me!

I was blessed with perfect fishing conditions so needless to say I was feeling pretty good about my chances hooking up with a trout before I had to switch gears. As the ball of sun rose in the horizon, so did the activity of the baitfish.  Pods of mullet were busting everywhere so I knew that it was only a matter of time until my Skitter Walk got smacked. It didn't take long to hook up with this 17" speck.


I had to run and gun since my time was limited. The spot that I was fishing seems to hold the trout more spread out across a big area. Top water comes in handy when you're trying to cover water and find the active fish.  Not long after this fish swam away was my next hook up.

I ended the morning with a total of 4 speckled trout between 15"-17". No, they were nothing to brag about, but they were a great addition to my morning cup of coffee. No matter how you look at, I considered it a success. Fish were caught when I could have had an extra hour of dreaming about catching them.  On top of it, I still was 20 minutes early to work! Hmm, this may have to be added to my morning routine...

I'm finally able to edit videos from both of my GoPros! It has only been 9 months of constant filming. Here is a little video from the recent spadefish outing with Rob Choi and Joe Underwood at the Chesapeake Bay Bridge Tunnel (CBBT). There will be more videos to come...

There are some things in life that you have to do even though you know you're going to pay for it later. Staying out past curfew when you're 16, calling in "sick" to play hooky, drinking too much on your 21st birthday, and fishing Saturday and Sunday with only a nap in between.

It does not take much effort at all to talk me into going fishing, even if it entails a crazy marathon like the idea that Rob Choi had. After discussing weather forecasts, tides, and other details, we came up with our hard game plan: Lynnhaven Inlet for the afternoon and evening, Hampton Roads Bridge Tunnel (HRBT) at night, and the Chesapeake Bay Bridge Tunnel (CBBT) for the entire next day.

Rob and I met at Oceans East 2 and talked to Kayak Kevin for a bit before we headed out. We checked the radar and saw a nasty storm headed our way. We headed to Lynnhaven to get a little fishing time before the storm hit. Even though we got blown off the water sooner than we liked by 20+ mph winds and a huge storm, we still managed to pull in some fish.  We both caught small redfish, croaker, and baby black sea bass.  I did forget my camera since I was in hurry to get on the water.

The next leg took us to the HRBT to patrol the light line in search of schoolie stripers.  We saw hardly anything in the light line, but did manage to pull in some fish to make it worthwhile.  All in all, we probably caught 9-12 stripers a piece. Not much size to these fish, all between 15"-24".

After getting off the water at midnight, we headed to the launch at the CBBT for a little "nap". Obviously sleeping in the truck is not the most ideal situation, but it was nice to close the eyes for a bit.  5am came pretty quick but it didn't matter, it was time to fish!  This time Rob and I was joined by Joe Underwood (PhillyJoe).

We got into spadefish in the usual spots but we couldn't get any with good size. All of us had double digit catches of spades from 8"- 11". Can't complain with that!


After playing with the spadefish for a while, we dropped some fiddler crabs for some sheepshead but didn't have any action. We then decided to cast some jigs tipped with random gulp and hit the jackpot. We were on the flounder!! Most fish were right around the 16" range with a few over 18" in the mix.  Between the three of us, we had to have caught around 40 flounder in less than 2 hours.

Like I said earlier, there are certain things in life that you knowingly do even though you're going to pay for it later.  It doesn't take a genius to figure out the human body does not like to operate on 3 hours of junk sleep. I was SHOT to say the least! Did we catch fish? Yes...Was it a long trip?Yes...Would I do it again? Absolutely I would do it again! Until next time...

"Must Do" Hawg Trough Mods

Every kayak fisherman realizes the importance of having certain tools while on the water.  Using a tape measure or measuring stick to measure a fish while in the kayak can be a pain to say the least. To me and most anglers alike, measuring boards are the way to go! I would venture to say that the Hawg Trough is the most popular of choices among us kayak anglers. While it is a great tool, it does have a flaw or two.   First thing, the raised lines for every 1/4" can be very hard to see, especially in low light! Second, it DOES NOT float! You don't want to find that out the hard way when you reach to grab the board and drop it in the drink! This is where a couple of little modifications come into play. You will need a few items to perform this task: Obviously a Hawg Trough a black Sharpie, a can of spray foam named "Great Stuff", and a razor blade. 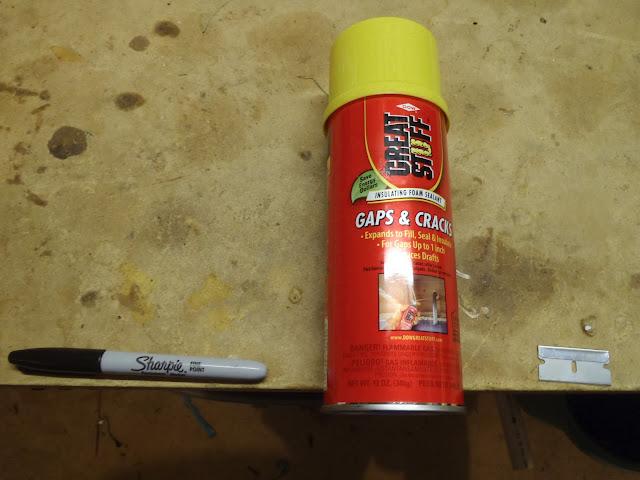 Let's go back to elementary school and trace out the 1/4" lines with the Sharpie. This will solve the problems with the difficulty of being able to see your exact measurement. 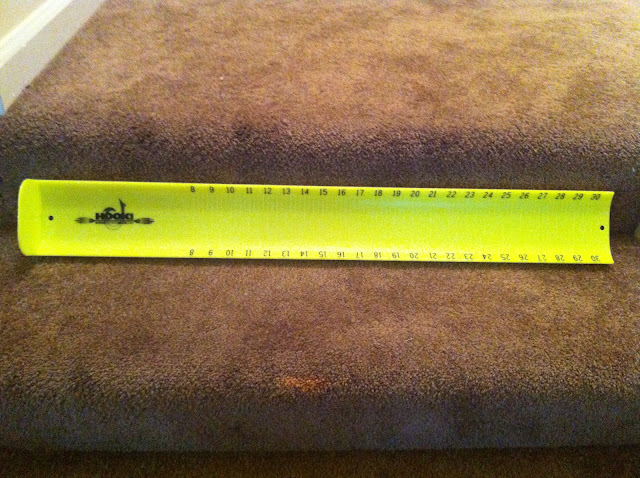 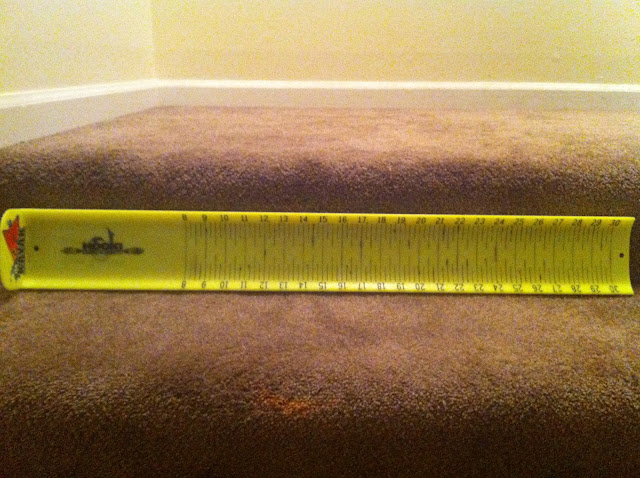 Now that the visibility issue is solved, let's make this thing float.  When you turn the board over you will see a channel running lengthwise on each side of the board. 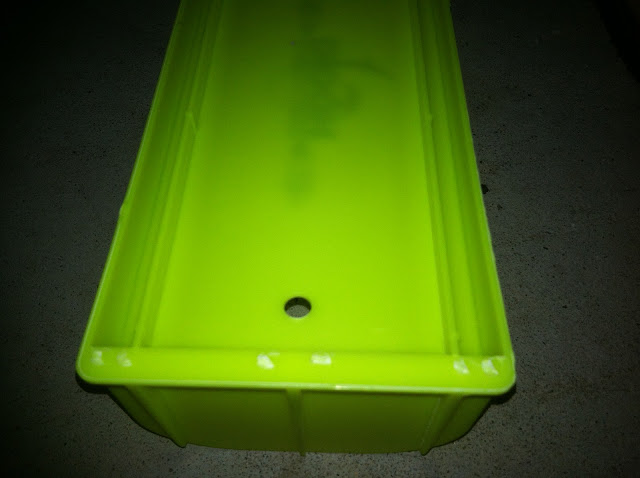 Lowes and Home Depot sells "Great Stuff" for under $4.00 a can. You will find it in your construction materials section. Take your can of "Great Stuff", shake it up, and run a bead of spray foam all the way down the length of the channel.  Follow the instructions on the back of the can. This will take a few hours to set up and cure.  Don't worry if you didn't fill the entire gap with foam, this foam expands as it sets up. Once the foam has raised like a loaf of bread and is dry to the touch, run your razor blade down the board to cut off the excess foam. Presto, a floating Hawg Trough! 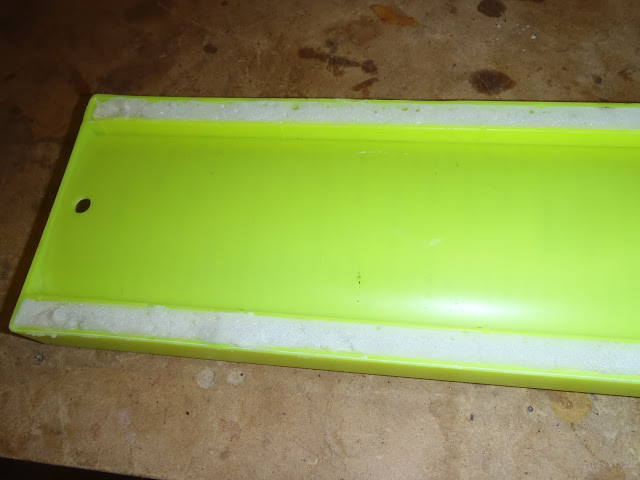 Now that you can see all your measurement lines and added some foam, you can throw on your sticker of choice to add a little personalization. 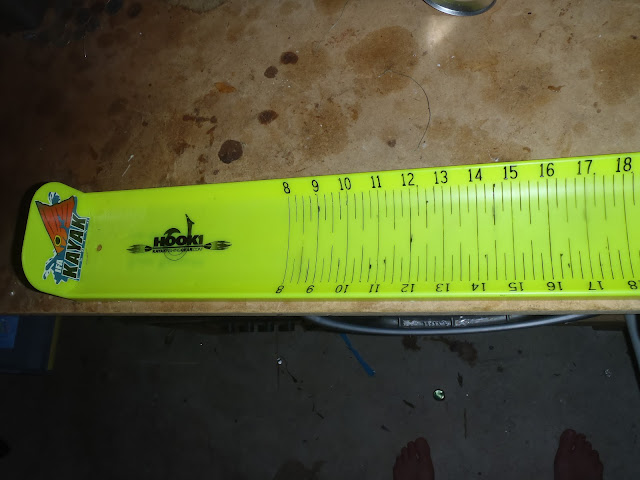 With a couple of simple mods, this handy tool becomes even better! If nothing else, it gives you a reason to play with your fishing gear when you're not on the water. Now go get on em!