A Day to Remember

Let's go back in time one week. The Saturday before the 2012 TKAA Kayak Fish For Charity Tournament had me kind of nervous. It was really weird to be this nervous one week before the tournament. I mean c'mon, I have fished other tournaments before, but this one was different. Not only was there over 285 fishermen, it was in my own back yard. I'm going to give an abbreviated summary of my tournament experience.

Since I have the "luxury" for working for Uncle Sam, I decided that it wanted to take a week of paid leave before the event to prepare for this huge tournament. I tossed many different ideas in my head on where to fish, when to fish the spots, what would be the best tide/weather mix, etc. After a weekend of tossing around different options, I finally decided on a plan. Trout all day Monday and Tuesday, flounder on Wednesday, and trout on Thursday and Friday morning. I knew I would run into reds on the way so I was really not too worried about strictly going after them.

Now I'm not going to sit here and give a play by play of every single day. What I will do is boil it all down to is this: I went through the week of hard fishing, and I mean hard! I woke up every day between 4 and 5 in the morning, rain or shine. I packed a lunch every single day, and fished until my "drop dead" time of 3 in the afternoon. My goal was to narrow down dozens of ideas into one structured game plan. Picture a football coach going through 100 plays and shaving game day down into his proven top 15. What I did was exhaust many ideas and formulated to what I believed was a "recipe for winning". 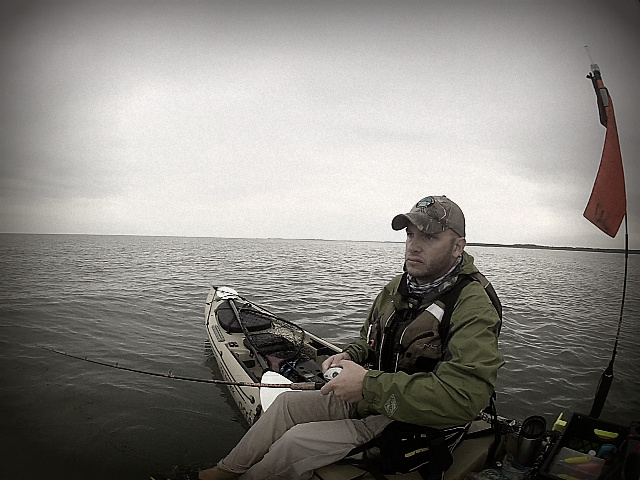 Finally tournament day is here. I was privileged enough to share some pre-fishing time and tournament day with my good friend and fishing partner Joe Underwood (PhillyJoe). We got to the launch an hour early to get our kayaks set up, check over our gear for last minutes tweaks, and shoot the breeze for a bit over some coffee to take the pre-game jitters away. Once it was safe light, it was on! We headed out with a purpose and did not deviate what so ever. We hit our three trout spots and both had our trout in no time. I ended up with 10 specks between 16" and 21.25" with three going over 20".

Joe caught 9 trout up to 19". Just like in our script, it was time to leave the trout biting as the incoming tide went slack so we could head over to the flounder location. The rough part though was the weather! The rain was enough to make any other trip a complete bust. That's one of the many reasons that I love my Ocean Kayak Trident 13. The rod pod is not just for fishing rods. Not only did I store extra rods, I also packed a small cooler, fishing tackle, and most importantly my Columbia rain gear to keep me dry on a day like this.

Just as planned, we launched out of Willoughby mid-day to some nasty wind and rain! It didn't take more than 15 minutes of jigging the pilings to get my first flounder of the day that went over 18". I thought that we were going to wear them out after nailing one right away. I was wrong; it was not until 5 minutes before my "drop dead" time until I hit another flounder that was bigger than the other that went 18.5". Before that I caught a hand full of little reds up to 14.5". Hey, they were tournament eligible!

All that leads up to the most stressing hours that I can remember. I knew I had a decent slam, but I didn't know how it would fare. I "weighed" in at 3pm just in case somebody came in with the same size slam. The deadline was 4pm, but a tie goes to the individual that entered his catch in first. One of the most unnerving times was standing in line to wait to have your photos reviewed. After confirming my 54.25" total, it became the dreaded "waiting game".

The raffle came and went, all the other categories were announced, and it finally came down to my 40 hours of pre-fishing and eight hours of game day. I was having many thoughts going through my head, all at one time. The last time I was this nervous was the day I got off the bus for basic training for the Air Force. After the 4th and 3rd places were announced without my name being included I thought, "Holy crap, I might win this."  When the length of the 2nd place winner was called was when it hit me. That was not my confirmed length, YES!

"And the winner of the Hobie Pro Angler 12 with a length of 54.25 is Richie Bekolay!" Those are words that I will never forget. I had tunnel vision as I walked up to shake Wayne's hand and to receive my medal. 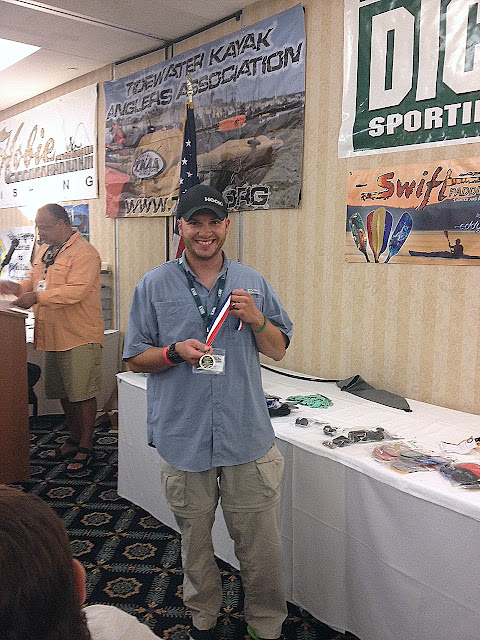 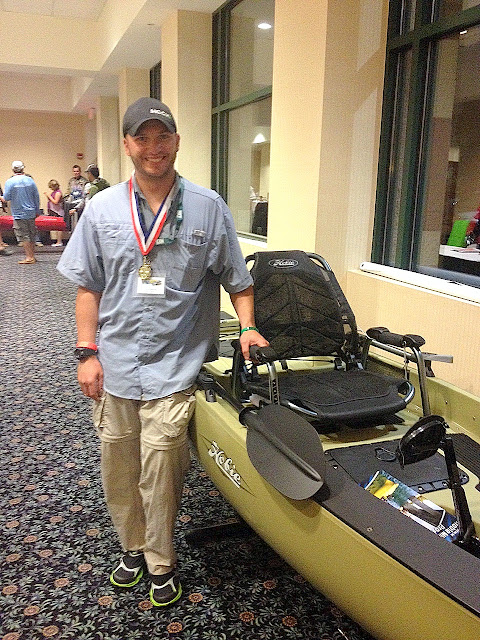 
As great as this Hobie Pro Angler is, I'm an Ocean Kayak guy! I stand behind my kayak and have the utmost confidence in it when I board the cockpit. This Hobie will make somebody a very happy fisherman, but I am sticking with my Trident 13. It's my baby!

The best part of this whole experience was that I got to share it with some wonderful people. It felt great winning the tournament, but it was an even better feeling seeing the smiles on the veterans faces as they received prizes and had prizes from other winners donated to the Heroes On The Water chapters. As a current service member myself, my hat's off with a big salute to all those vets that we were so lucky to be around. The entire TKAA crew and Heroes On The Water coordinators did a remarkable job on putting on such a first class event. I only wish that everyone that may read this had been able to experience it. I'm already thinking about next year's tournament. Hmm, where am I going to fish???