Here is a video snapshot of my 6 weeks of fishing while attending class in the Florida panhandle. Trout, bull reds, ladyfish, etc...Check it out!!

With my final week of leadership school here and gone, it also brings and end to my Florida panhandle fishing adventure. Just like my goal driven career in the Air Force, I have goals when I hit the water. I was excited for the new challenge of not only fishing new water, but a completely different region of the United States. I would have to say that I met "most" of my goals for my 6 week trip.

I fished HARD the last 6 weeks here in the emerald coast of Florida. Every moment that I did not have class or homework, I was on the water if the weather would let me. Still, even my final week here, I still found time in the crazy schedule to hit the water. I gathered some fiddler crabs at low tide behind the baseball field on Tyndall and decided to try my luck for sheepshead. The bad part was the main section of the bay was choppy and one arm paddling was a chore to say the least. I tried another spot in more of a secluded area and found myself catching small ones. It was not what I hoped for, but they made it fun. 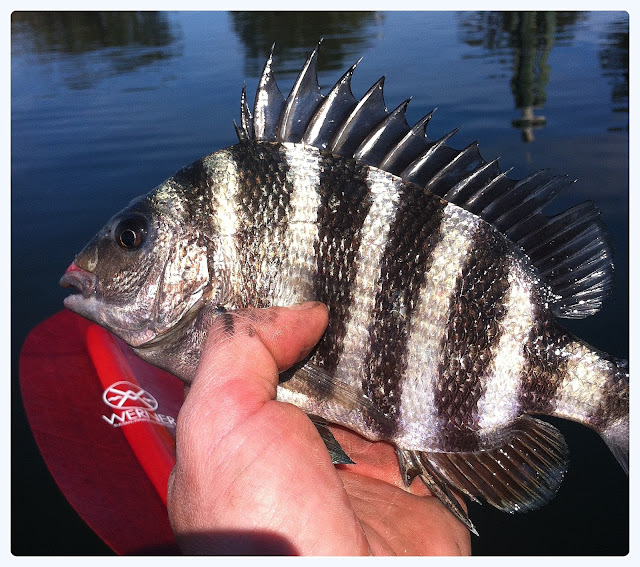 That night I found myself at my favorite spot in Panama City, the Tyndall (Dupont) bridge. I'm not bad mouthing the locals around here at all, but I found it crazy that I could consistently catch big bull reds under the lights and almost NEVER see another fisherman. The only time that I ever saw anybody was when I ran into Shawn and Doug from the local kayak fishing group Panama City Kayak Fishing Association (PCKFA). Other than that, I was the only guy on the water, crazy!! If this was in Virginia, this place would be a parking lot of kayaks! Anyways, like usual it didn't take long to get into the bulls. First one of the night was a 38"er. 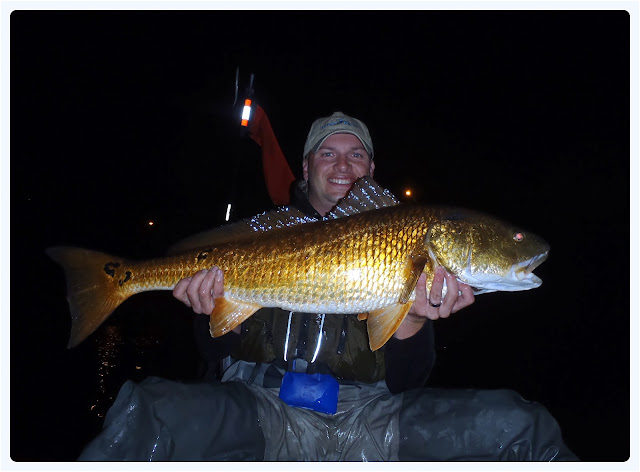 Catching these bull reds at night will never get old. I describe it as a crazy addiction that is completely healthy that you don't have to quit. I must have launched to the tail end of their feeding because not 5 minutes after I caught my first one was when I had another peeling drag from my Penn Battle. Another 39" wanted to have his picture taken this night! 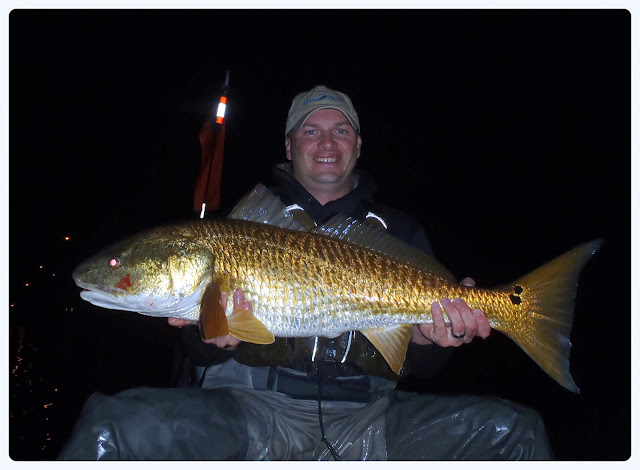 That's all she wrote for that night under Tyndall Bridge. The feeding completely stopped so I decided to call it an early night so I could tip a couple "cold ones" back and relax for my last weekend in Florida. Plus I knew I had the next night to give it another go.

The next night was no different than the night previous. It did not take long before I got into some reds that were tearing up baitfish on top. I tell ya, there is nothing like a pissed off bull red round housing everything in front of it. I landed a 39" and 40" this night and that was it. The 39" flopped off the measuring board before the photo op but the 40" wanted to show off a little. 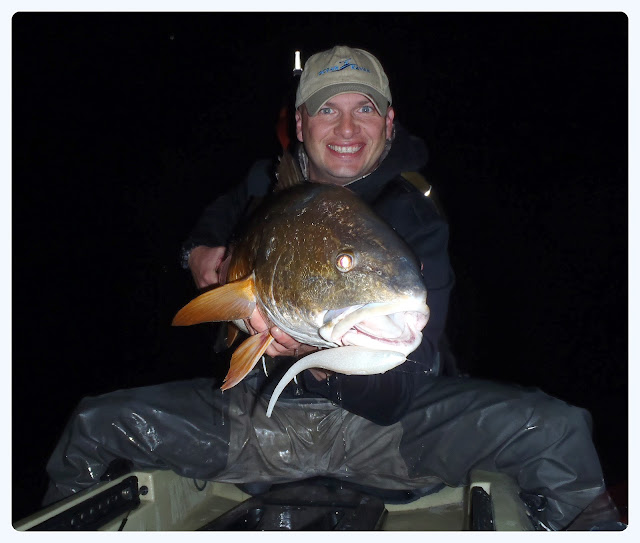 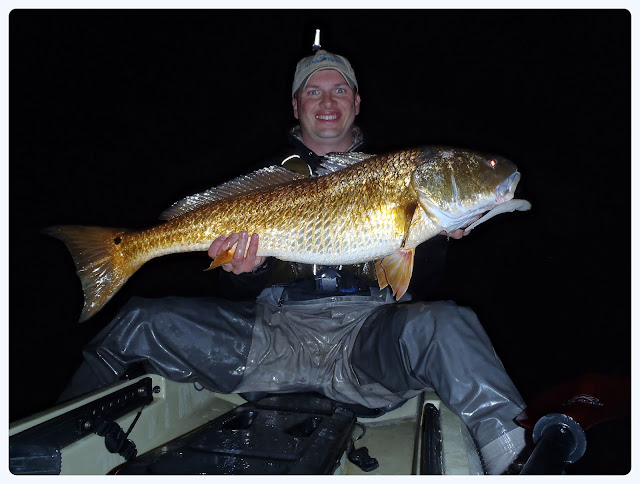 All in all, this trip was big WIN for me to say the least! I caught ladyfish, sheepshead, little black sea bass, dozens of trout, and 33 bull reds over 32". Honestly, I will never be able to fish the bridge lights again in Virginia without borderline crying while thinking about those insane bull reds in the panhandle of Florida. I did not get a chance to go for grouper and snapper offshore due to the weather and my schedule (my missed goal). A big shout out to my Pensacola peeps and the people of PCKFA! You guys were super cool, shared the "local knowledge" with a complete outsider, and made this Virginia guy feel welcome on your home turf. For that, I truly say "Thank You"!

I would be messing up if I didn't acknowledge the true reason I was here...In the time of a crazy economy, war, and politics...I can truly say that I'm proud to serve in the United States Air Force! This is my calling and I take it very seriously! It was blessing to share the classroom with 15 other Airmen that would fight next you any day of the week. To my class 13-2 "Blue Flight"...Be safe, have fun, and BALLS TO THE WALL!

Now it's back to my Virginia waters! I have a lot of work with the Kayak Bass Fishing Open and Invitational around the corner. I need to take a break from the salt, and get into the fresh. Time to go back to my roots of breaking the jaws of the bucket mouth bass! Until next time...

Battle of the Bulls

I feel pretty safe to say that every fisherman at some point in time will reflect back to their "best day" on the water; thinking back to the time where the fishing was incredible or when you landed the biggest fish of your life. Heck, that is one of the reasons that we fish. Those are memories that you will never forget. For me, the "best night" that I ever had on the water was a few weeks ago when Marty Mood and I put a whoppin' on some Pensacola bull redfish. Honestly, I have not stopped thinking about that trip. The drag screamin', bull ridin', head shakin', top water blow ups, and power runs kept playing in my head every single day. I finally said enough was enough and went back out to a local bridge in Panama City.

Once again, the conditions at Dupont Bridge were awesome; low winds with a steady outgoing tide. I was formulating my game plan for the evening as I paddled out to a certain section of lights. I didn't get very far when I saw a huge commotion followed by a load roar from a big fish busting bait under the light line right next to me. Instincts kicked in and within seconds I had my heavy spinning rod out and pitched out my big jerkshad. Just like the TV shows would go, FISH ON! First cast of the night yielded a 40 1/4" bull red, great start if you ask me. 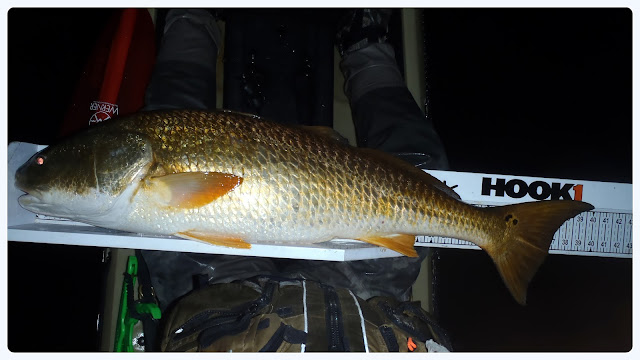 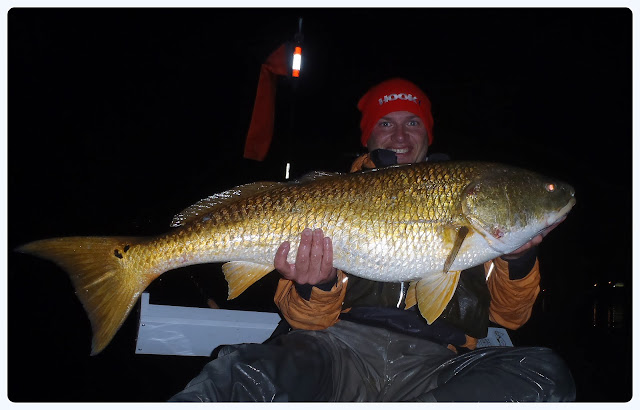 I could hear bull reds terrorizing baitfish up and down the bridge system as I was setting up my camera for the photo session. After a couple of shots and a quick release, it was time for number 2. As I was releasing this fish, another big red was going ballistic in the same spot I caught the last one. Round 2, FIGHT!!
﻿

Over the next few hours, I had nonstop action! There was no crazy tactic or method that I used. I only threw a 6" Z-Man's jerk shad on a 1/8 oz Marsh Works Bull Red jig head. You didn't need to use live bait or heavy jigs. The fish were up to all night long and crushing anything that was in front of them. I did have one crazy experience as a big bull smashed my lure as I'm getting ready to pull it out of the water for the next cast. My heart skipped a beat as I just held on to the rod and made sure that I did not fall out of the yak. This 39" bull had the coolest looking tail that I have ever seen! 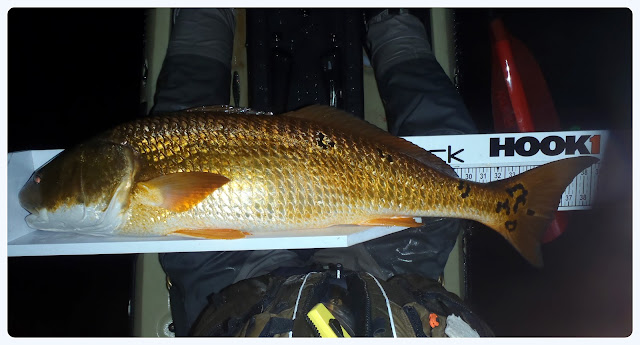 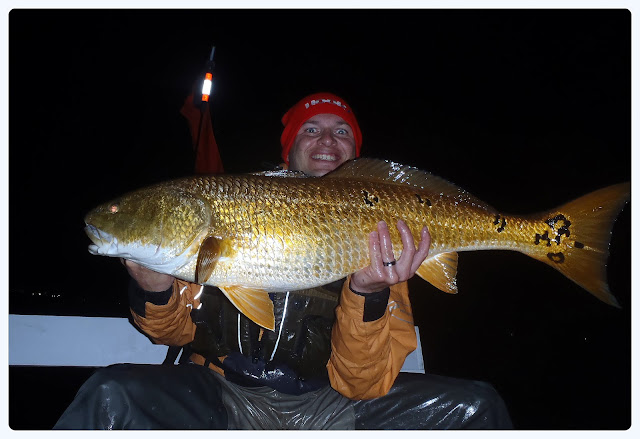 I only fished under a couple of lights all night and watched the parade of bulls cruise the light line of the bridge. I honestly did not go 10 minutes without hooking up. At one point, I had 4 bulls in 4 casts! It was getting late and I decided that I was only going to fish until midnight. You know it was a good night when you hands and arms were sore from fighting with the bulls. I caught a big bull on my first cast and I wanted to catch one on my last.  At 11:52pm, I hooked up again with another nice red. This fish pulled more drag than any other fish did all night long. Getting the first glimpse in my head lamp beam and I could see why. This 41" put up an amazing fight! 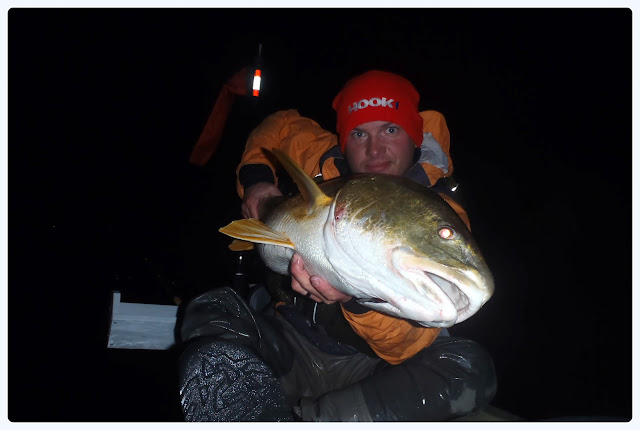 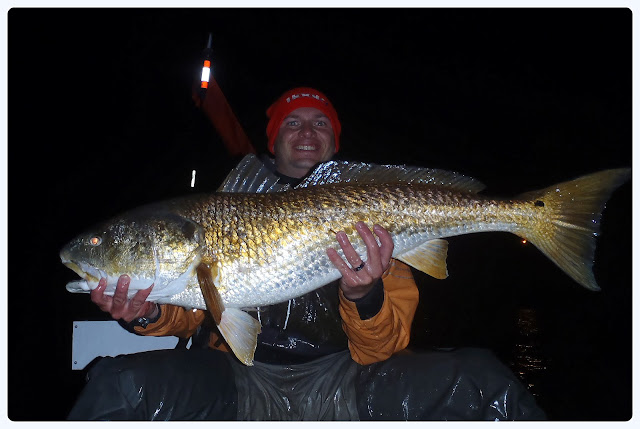 That was the icing on the cake! The biggest fish of the night was the last fish of the night. When the smoke cleared from the "Battle of the Bulls", I was left with landing 15 fish between 32" and 41" and losing 5. In all honestly, I left these fish biting. I could still hear big reds smashing bait on the surface. Part of me wanted to stay out but I had a ton of studying to do the next day. Hey, you have to weigh everything out. One thing is for certain, I will not be able to stop thinking about my new "best night"!