The whole purpose for the review of the Penn Battle series of spinning reels is to give the reader an actual "review" and not an advertisement or a specifications chart that you could get from the manufacture itself. I have fished these reels for almost 2 years with countless hours on each reel. With that being said, let's get started... 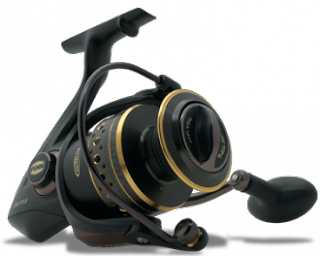 The Penn Battle lineup is very popular among inshore anglers. Penn has designed these reels from everything from trout, snook, redfish all the way up to cobia, tarpon, and tuna. The Battle sizes range from a small 1000 all the way up to a bigger 8000. I only have experience on the 3000 and 4000 sizes and cannot speak for the others. I will go over the pros and cons of the Penn Battle and figure out if the reel is worth its price point. I will rate it on a 5 star scale like most other reviews.


The first thing that jumps out about the Penn Battle is the price is soft on the eyes. It seems like a lot of anglers look around the $100 range for a good spinning reel. Even though $100 is not something everybody can just throw around, it's not a bad price tag for a "high quality" saltwater spinning reel. When you grab a Battle for the first time, you will notice that it feels sturdy and tough out of the box. The soft knob feels really nice along with a smooth retrieve. The spool comes with a rubber inlay which enables the angler to tie braid or any line of choice directly to the spool without backing the reel with mono. Myself, I back all of my reels with mono just for added insurance. It's a personal thing I guess. First impressions are lasting and my overall first impression of the Battle was a good one. The next test was how this reel would hold up to the salt water environment for the dedicated kayak angler.

On the 3000, I first started catching speckled trout and schoolie sized stripers (under 30"). The HT-100 drag system felt really smooth and didn't stick at all. Penn upgraded the Battle with carbon fiber drag washers compared to the lower grade felt drag washers. The 4000's drag was put to the test with numerous Florida bull reds. The drag didn't stick at all and felt pretty smooth. I was fairly happy with the way it handled. Along with that, the infinite anti-reverse was solid throughout the entire retrieve without any play.

On the flip side, the reel is heavier than I would like. The 3000 is over 11 ounces which may not sound like much, but when you compare it to the similar Shimano line that weighs 9.5 ounces and under, it makes difference. Many anglers like myself like a lighter reel to balance out medium light to medium setups for most inshore needs. You could attribute the Battle's weight to a full metal body and stainless steel components throughout the reel. My first time out with both reels was not what I expected. I like fishing high quality braid which is not cheap. Within the first few casts, I experienced horrible wind knots! Hoping it was only the "wind", I didn't think much of it. It kept happening during trips when the wind was not a factor. These wind knots would get so tight that it sometimes made sense to just cut the line and re-tie my leader. Remember from earlier, high quality braid is NOT CHEAP! These reels do not like a full spool of line. That's just my opinion on that.

As time went on with many hours and many fish landed between the two reels, I started noticing a downward spiral in both reels. The 3000 showed the greatest signs of a degraded reel. It didn't take long for the reel to start sounding like a meat grinder with a stiffer retrieve. As kayak anglers, we are lower to water and exposed to the elements more than the powerboat fisherman. I make sure I fresh water rinse all of my rods and reels after every use. After 6 months of use, the reel needed to go into the repair shop. At the same time, my buddy's 4000 needed to go into the shop as well. The cause was the same bearing in each reel was bad and needed to get replaced. Not something that I expected from a $100 saltwater reel. Fast forward a few months out of the shop, it's started to stiffen up again just as before. Another buddie's reel even had the internal gearing strip out during a battle with a good sized striper. After the reel was broke down, the main gear was found to be completely gone! These are just a couple of the many stories I have heard. The reel is loud, rough, and is not enjoyable to fish with.

The 4000 does not see as much use as the 3000, but I still noticed a change. I could feel that the reel became sloppier in the retrieve. The spool has more play when there is a load put on it and the overall feel of it is not as tight. I have used it to catch a lot of fish, but it feels more "broken in" than what I would like.

After weighing out all the pros and cons, I give the Penn Battle...


Overall, I expected a lot more from the Penn Battle.  The $100 price tag in my opinion is a little high for the reel you are truly getting. I would like to see the reel $10 to $15 cheaper. I suggest checking out the Shimano lineup of spinning reels. They make a reel that is suitable to any angler out there. If possible, save up an extra $20 to $30 and take a look at the Shimano Saros. You will immediately feel a difference in quality that lasts!

Like I said earlier, I'm speaking from my personal experience and other fishing partners that have directly used Penn Battles in my presence. I'm sure many fishermen will completely disagree with me on this review which is fine. For the review readers out there, remember that A LOT of reviews are written after owning the reel for a few weeks with only a handful of times actually being used. Most reels will feel nice out of the box but the true test of quality can only be measured with time and use.

Thanks a lot for taking the time to read my review of the Penn Battle series of spinning reels. I hoped you found it useful and will consider it the next time you're out reel shopping. I will continue to review products only after I feel the review is credible and will be useful. Until next time, good luck and safe fishing!