I got an early start with plans to stay out all day. The weather was supposed to be decent with a chance of rain later in the day. Go figure, the forecast was wrong and it rained most of the day. What did I forget to bring with me? You know it, rain gear! Anyways...as the tide dropped out the fishing picked up! The extremely low tide was just what I was waiting for...

I was able to entice a couple of trout between 18" - 21.5" on topwater before I went after reds. The clouds and rain made it impossible to comb the flats for sight fishing. I chose to stake out in a "pinch point" between two shore lines and intercepted reds as they worked into a shallow cove to reek havoc on schools of baitfish. You could see the wake coming from a distance, along with the tips of their tails breaking the surface. Within a couple of hours, I tagged and released around 2 dozen reds between 19" and 23.5". 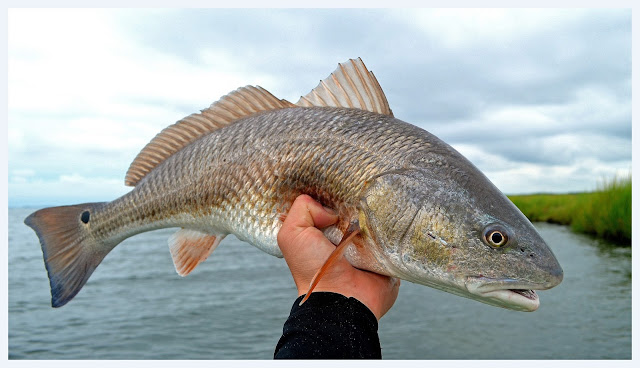 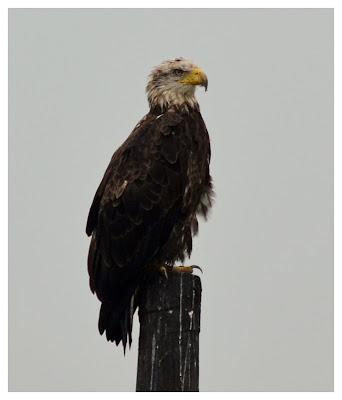 Over time, I started to follow my mother's footsteps and try to carry a camera with me everywhere I go.  Even though I hate putting down the fishing rod, I love picking up the camera to capture those eye catching moments.

The bald eagle brings back memories of my early childhood. I remember being on the water at a very early age, casting musky lures with my dad all day while watching bald eagles roam the skies of our northern Wisconsin waters. If only my current spots had loons to sound off at sunset, I'd be in heaven..

Even though this Monday was full of clouds and rain, it still was a wonderful day on the water. The fishing was fantastic, topped off with a photo session of Mr. Eagle. I'll take a start to the week like this anytime!