Green Light for the Gulf

Take a kid and put him in front of a candy store. The biggest, baddest, most awesome candy store he's ever seen. He is thinking of one thing and one thing only...

"how in the h-e double hockey sticks am I going to get into that store?!"

Well, I am that kid and my candy store is the Gulf of Mexico. 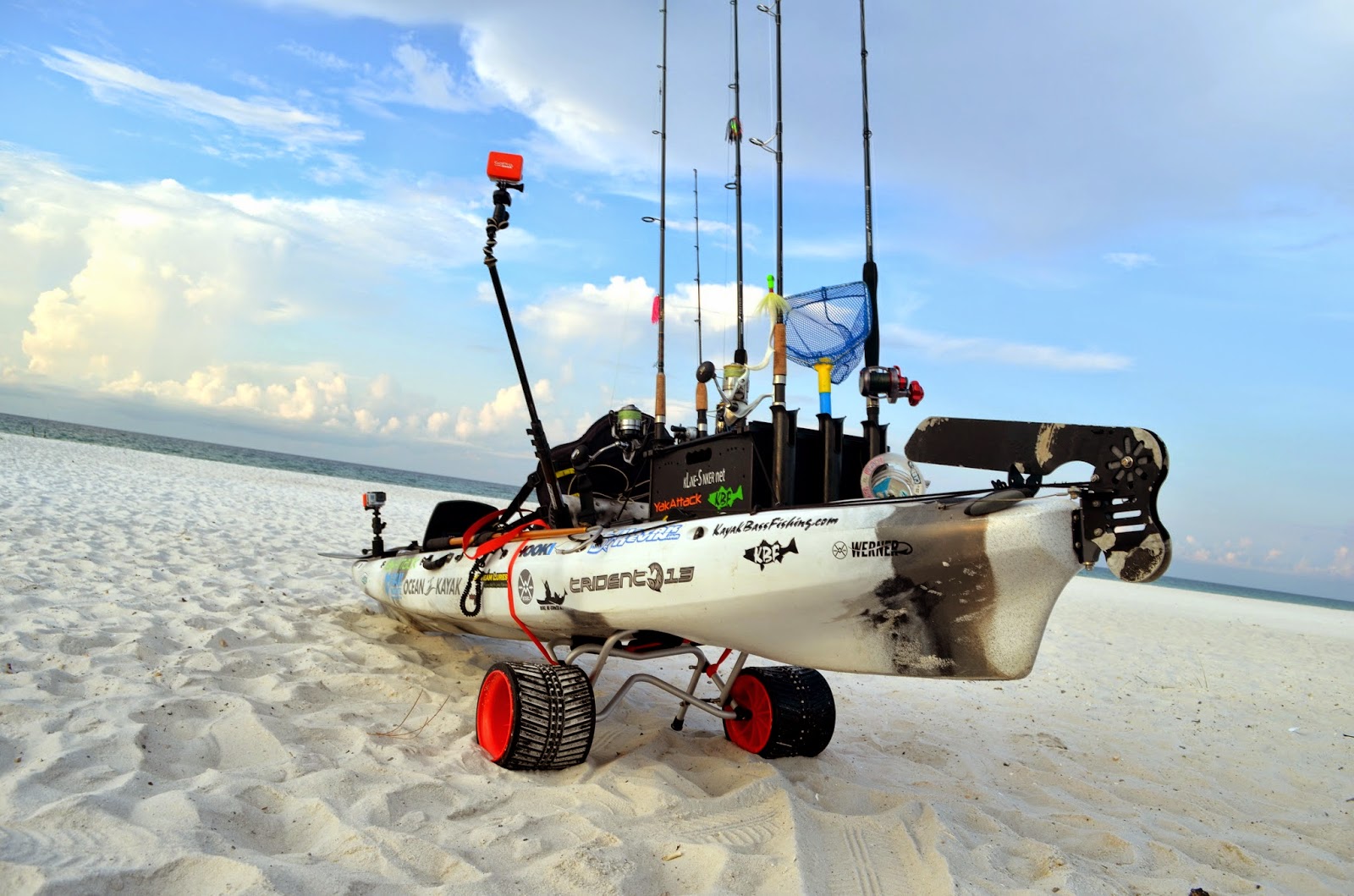 Uncle Sam recently relocated my family and I to the Florida panhandle to fulfill the continuous mission of the US Air Force. As you could imagine, moving a family of 3 from one state to another is no easy task. The house was filled with boxes upon boxes which meant that there was plenty of work to be had. Being the very lucky husband I am, my wife knew how bad I wanted to get out and that I just wanted to take a little break. I got the green light to join my good buddy, Marty Mood, for my first voyage into the Gulf of Mexico. 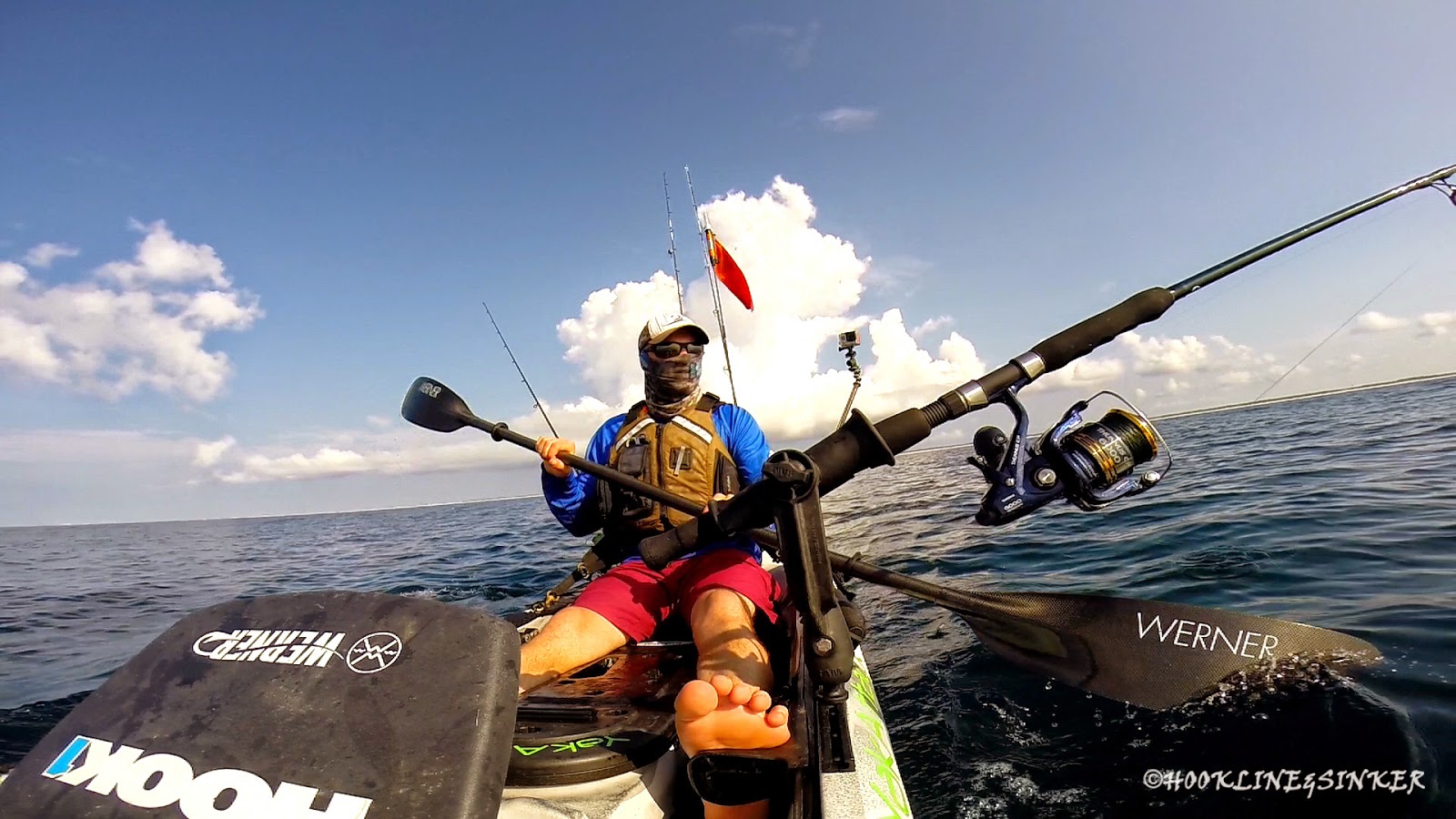 The plan was to try and catch some bait, then troll around a couple spots, and drop baits over structure. I didn't care what the plan was, I was in the gulf and that was all the mattered!

Finding bait was simple, catching them was a different story. Threadfins and cigar minnows were all around us but most of them wanted nothing to do with our sabiki rigs. We brought out plenty of frozen cigar minnows so we didn't waste a ton of time going for lock-jawed bait.

The first thing that I couldn't help to notice was how flippin' clear the water was. I was floored that I could see the bottom in 30 feet of water. We trolled to the first spot without any action on the trolling rods. Now it was time to bottom fish. I dropped a frozen cigar minnow tipped circle hook on a fishfinder rig straight to the bottom. I had bites almost instantly, but it felt pretty small. I lost a few baits before I hooked up with my first red snapper. Even though he was on the small side, he still put up a pretty good fight for the size. 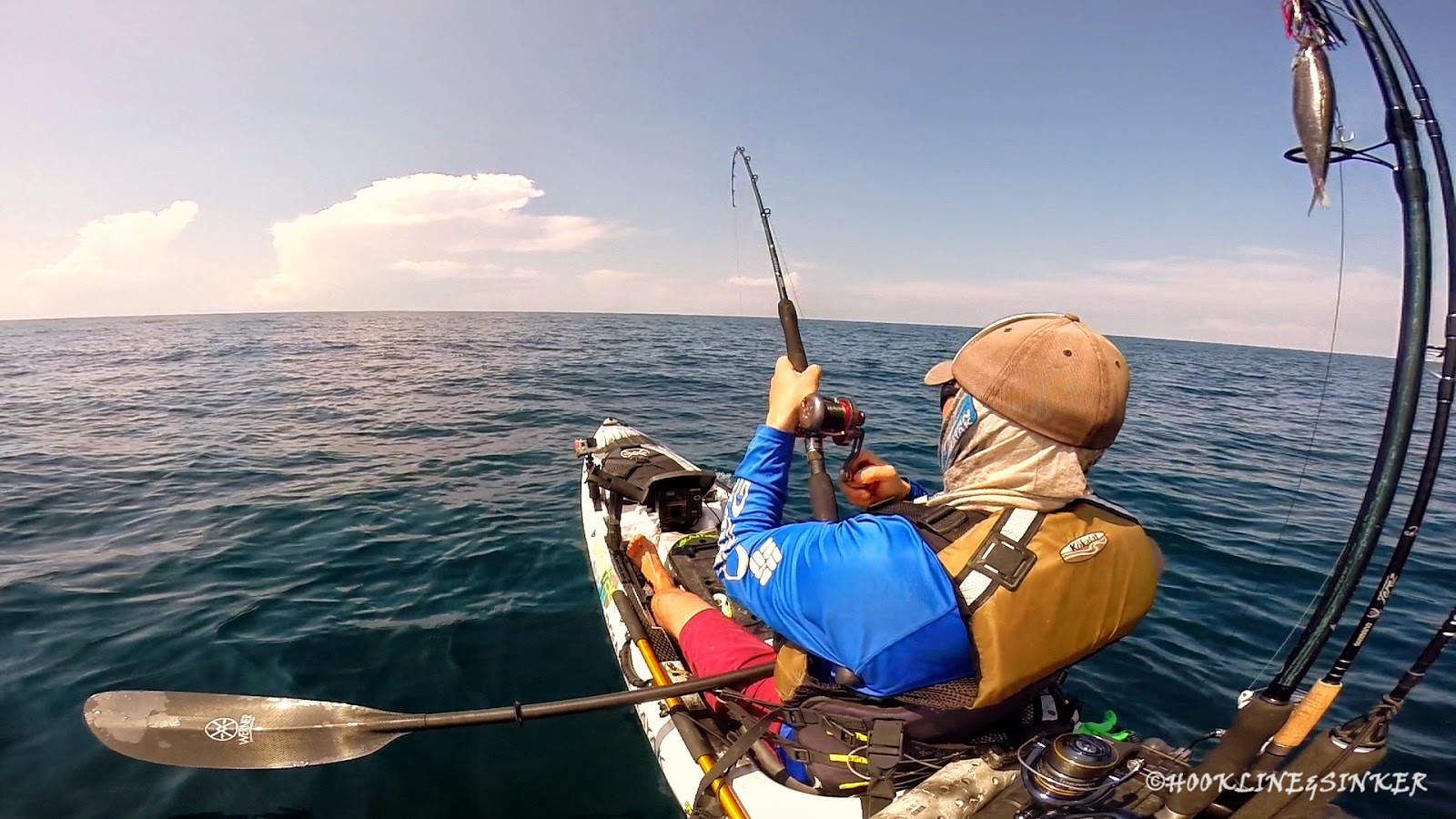 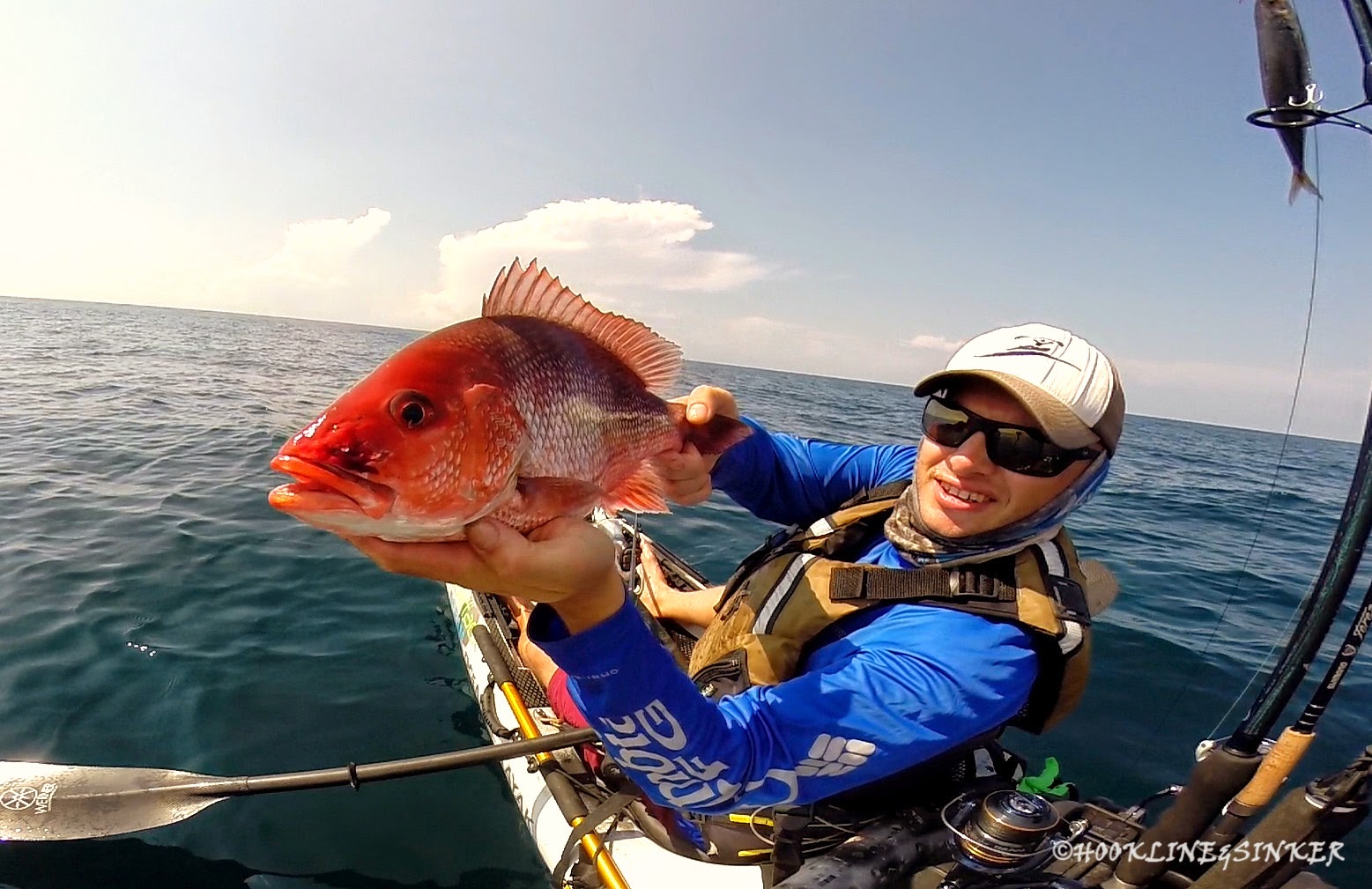 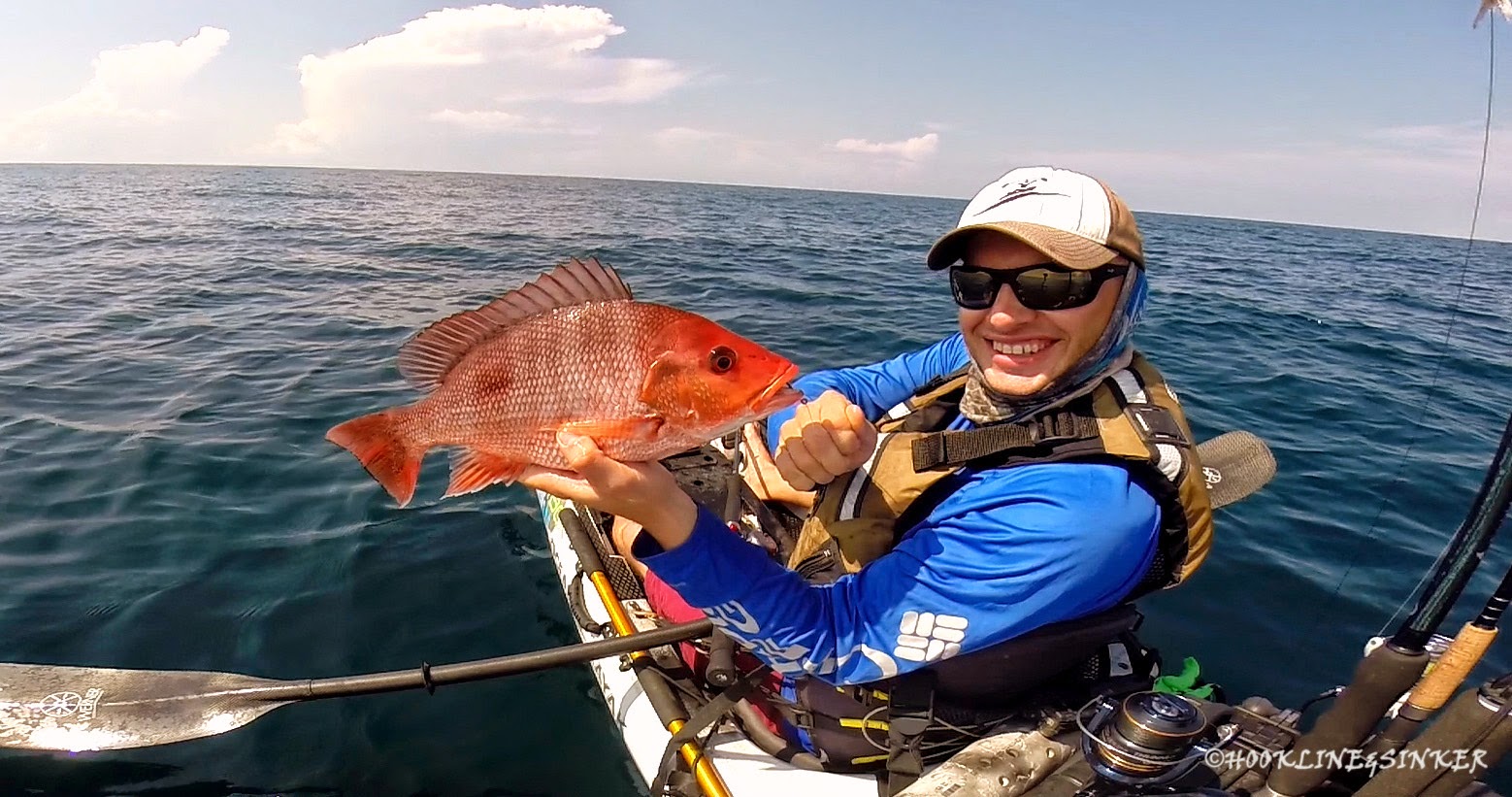 The majority of the bites were little stuff and Marty made the executive decision to move on and try another spot. Instantly we could see suspended fish in 20-30 feet of water. We could not only see them on our electronics, but with our eyes as well. Mangrove snapper and small cobia were hanging out below and Marty tried to fire them up by throwing out chunks of bunker and cigar minnows.

Once the fish were feeding on the chunks, we added chunks to weightless circle hooks to mimic the chum. Problem with ultra clear water is that enticing these fish to eat your presentation can be a little bit tougher. Tough or not, it wasn't long until Marty hooked up with a strong mangrove snapper! 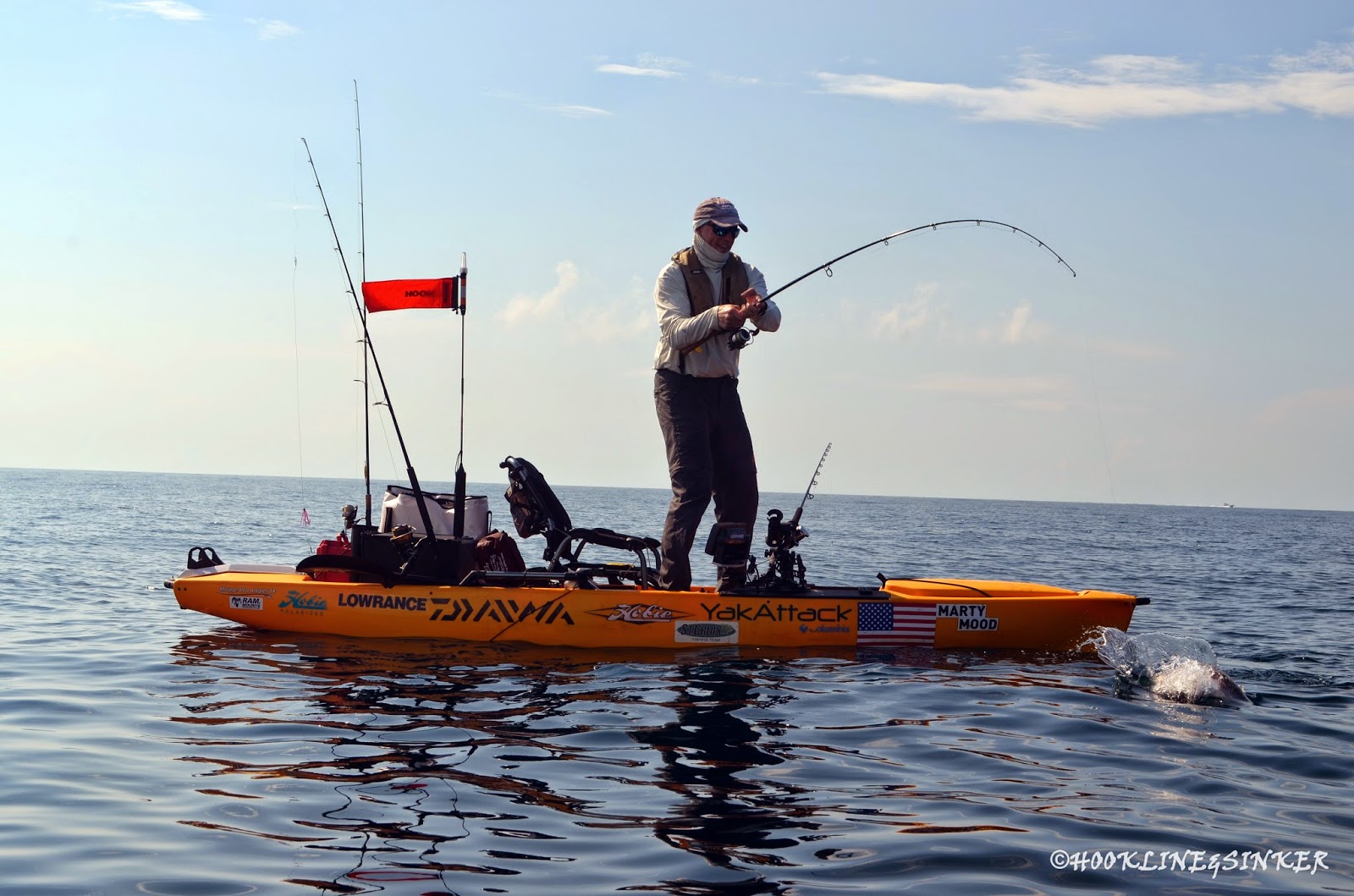 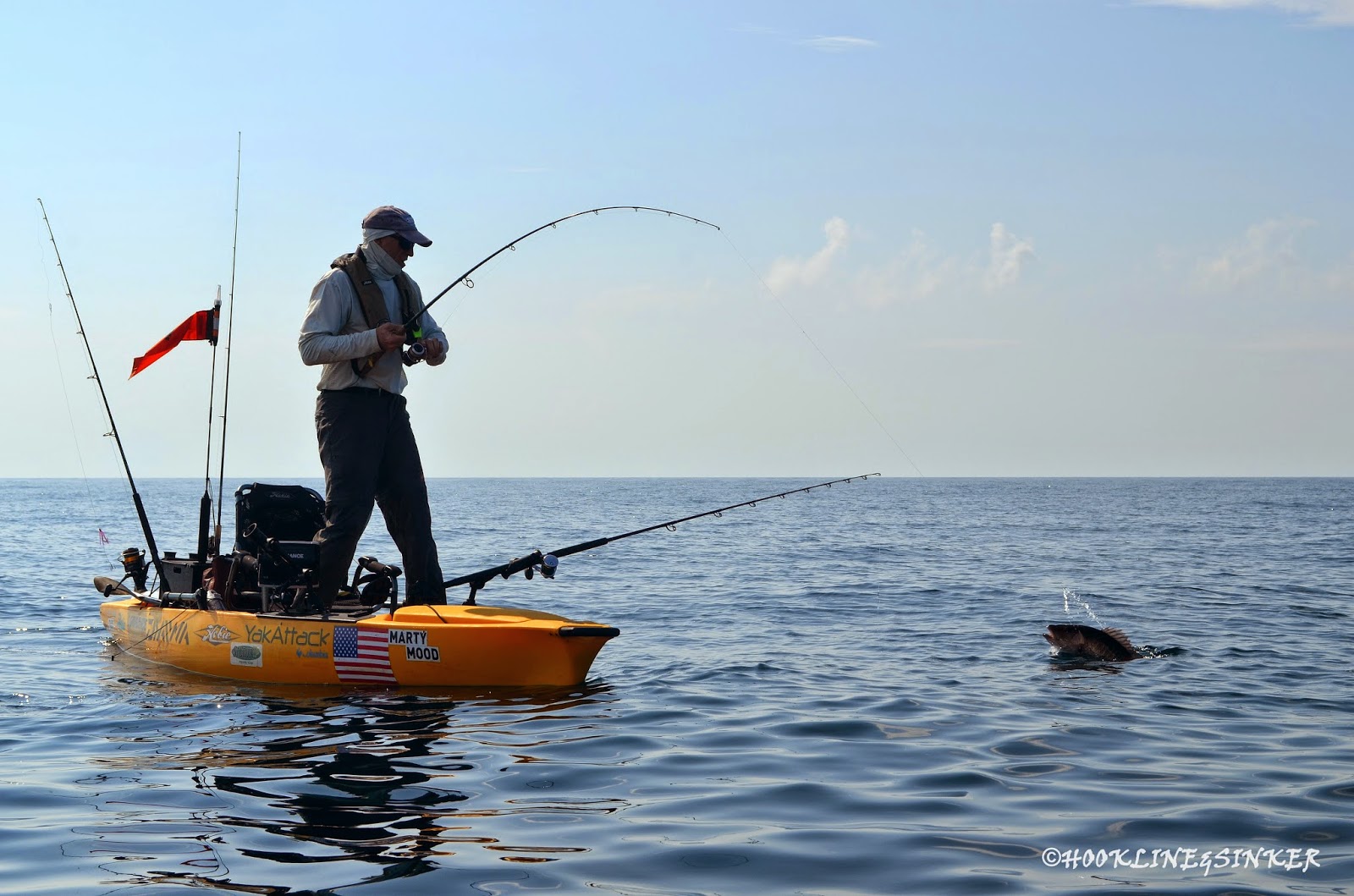 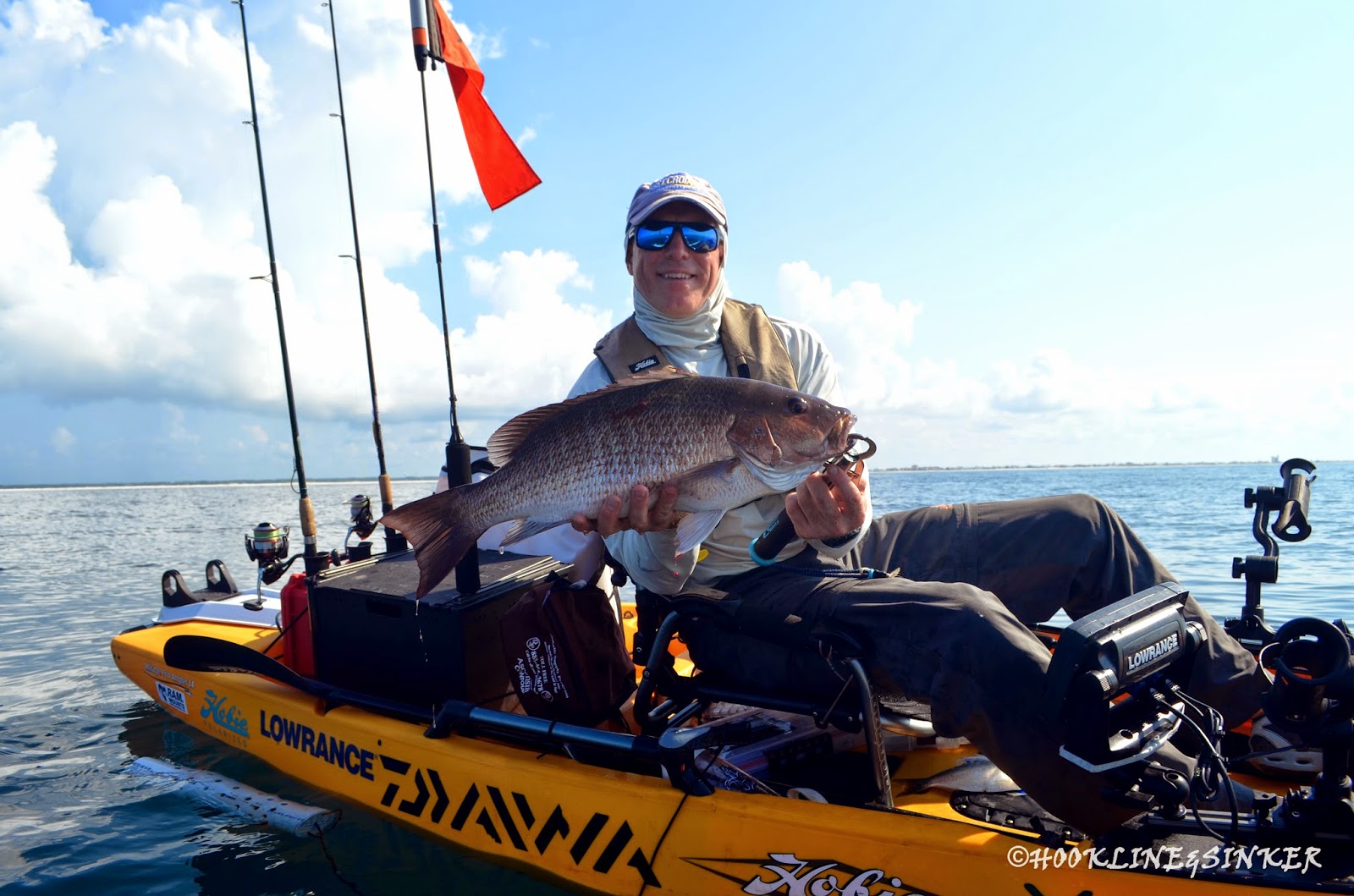 I was up next after Marty's snapper. This time, I hooked up with a small cobia. Too bad he wasn't 30" bigger. 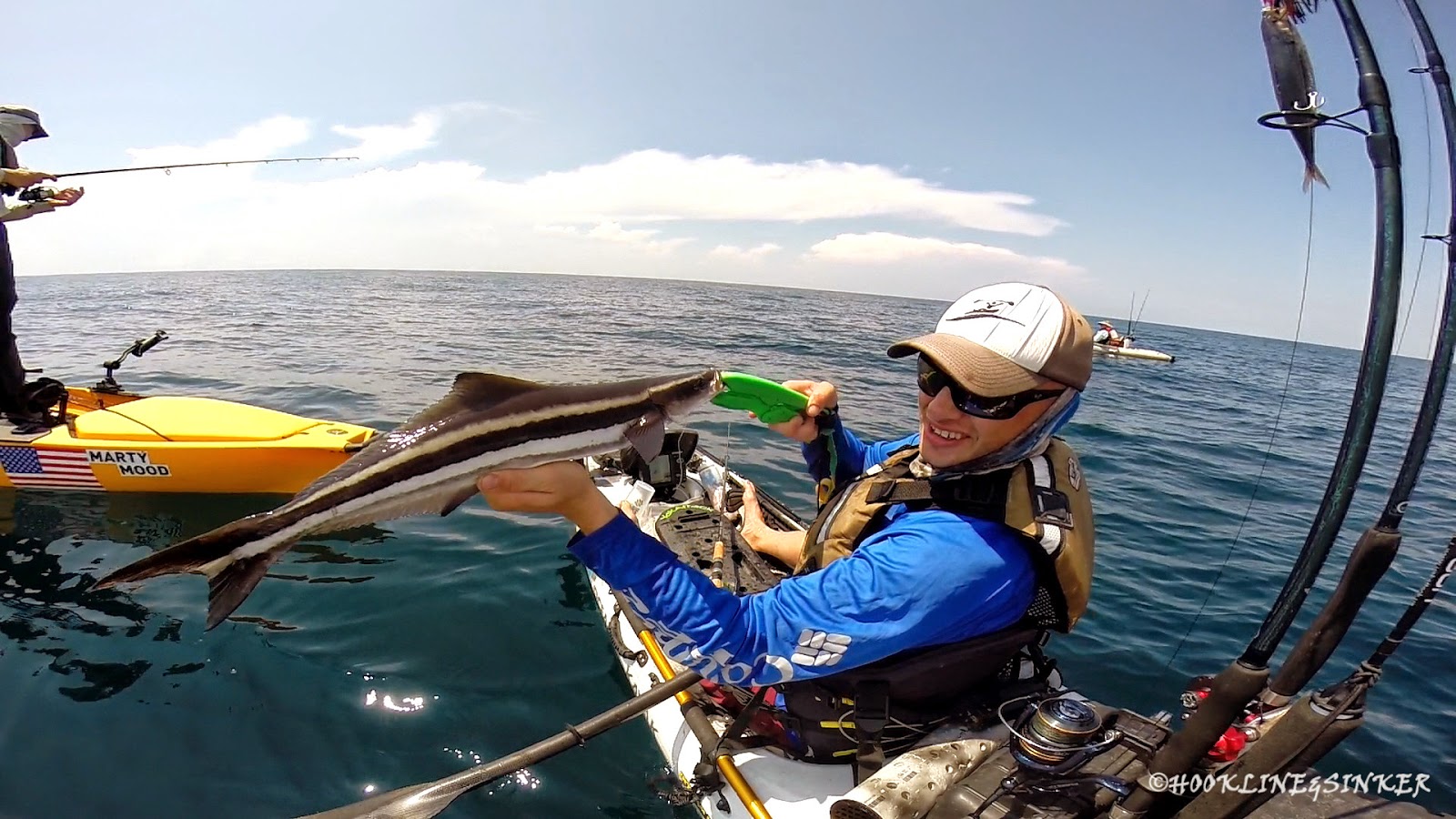 Problem with chumming is that you're pretty much ringing the dinner bell for the sharks. We were wondering what happened to the fish and the activity, but it was pretty clear when multiple 5+ foot sharks were swimming under our kayaks. Oh well, time to move on.

We saw birds working pods of bait as well as other fish busting up bait on the surface. It was pretty evident that there was plenty of action to be had. As you approached the schools of bait, you could see bonita and blue runner chasing the bait clear out of the water. I tied on a Yozuri Crystal Minnow and instantly hooked up with a fun fighting blue runner. 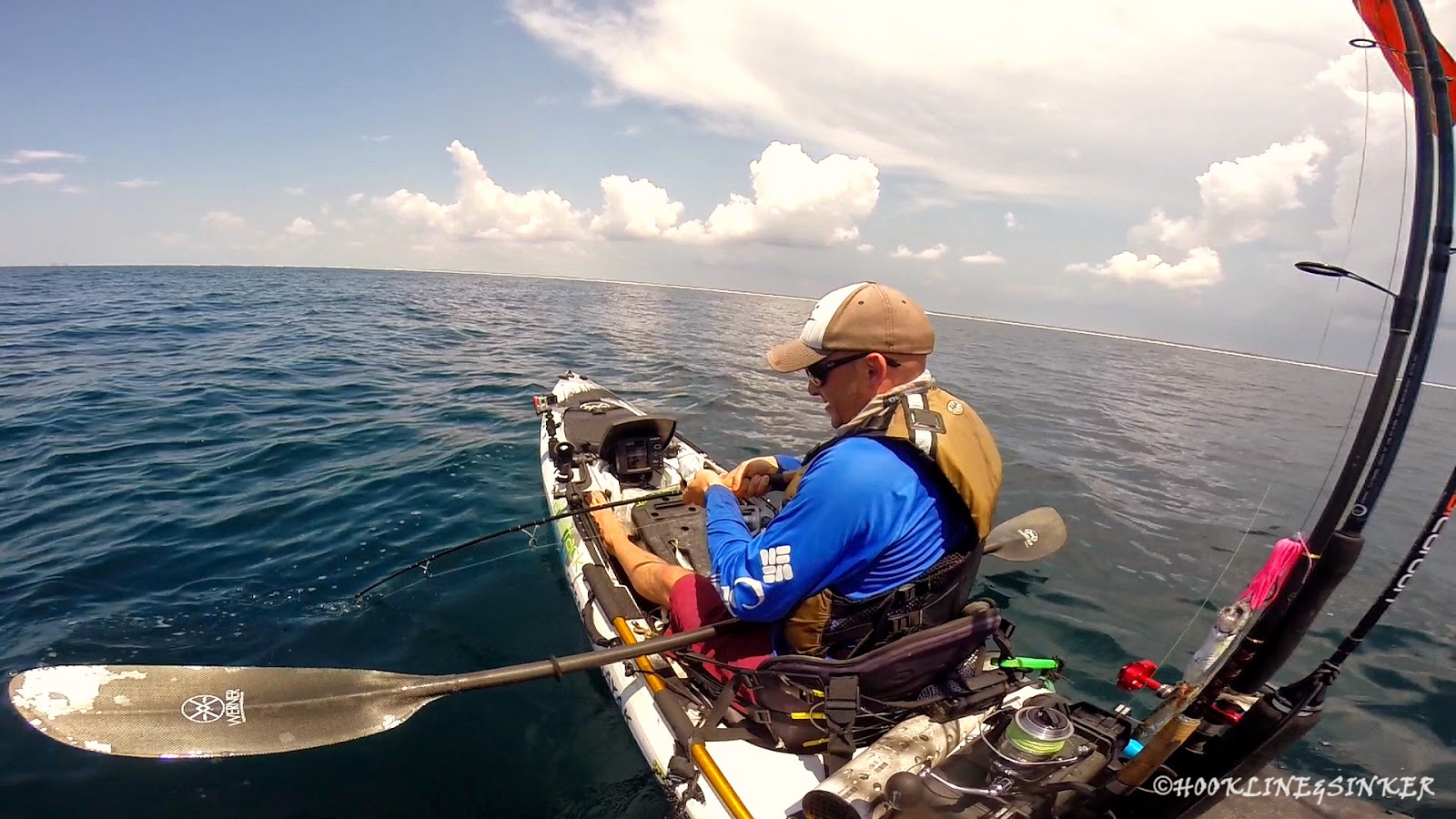 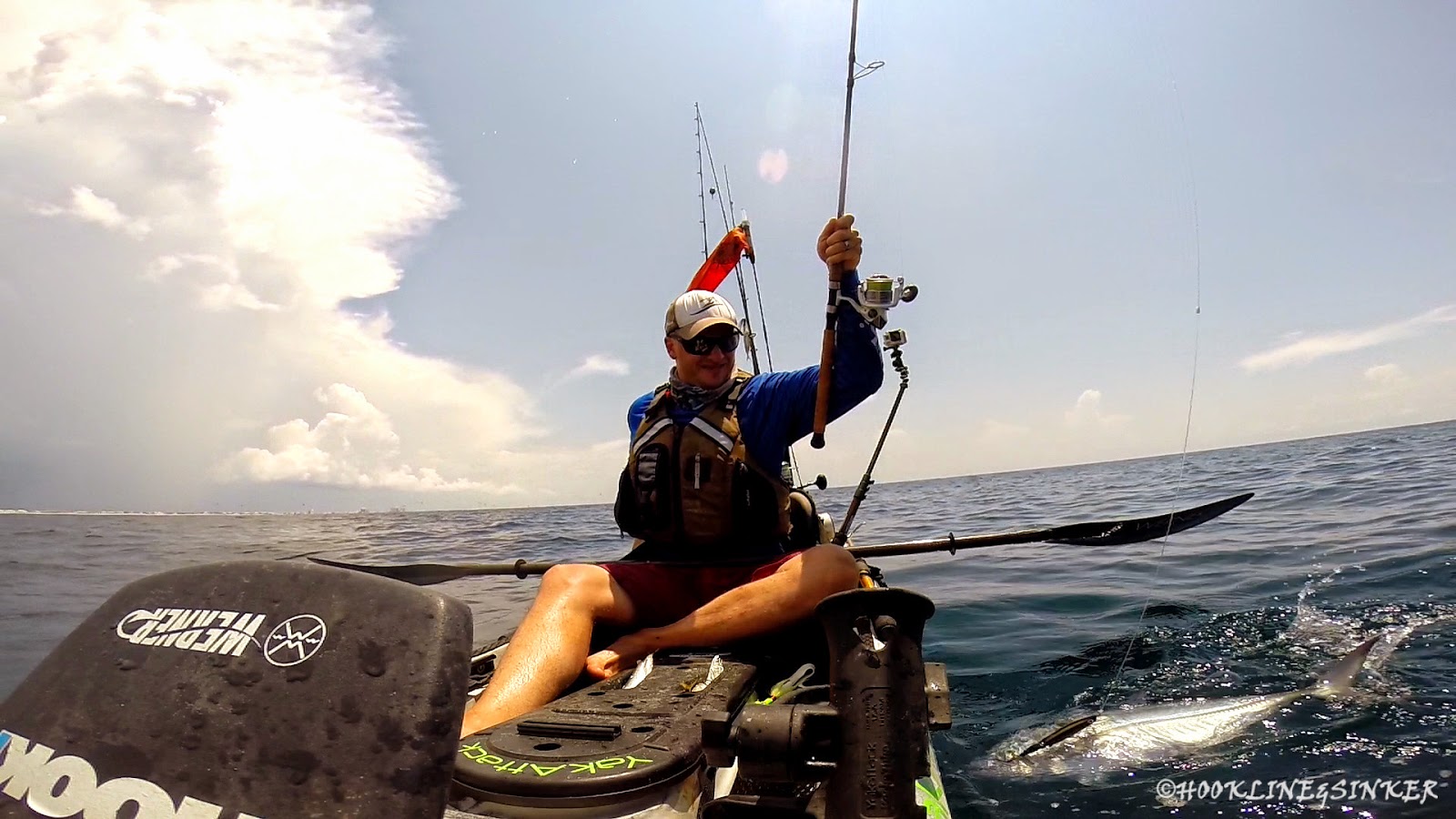 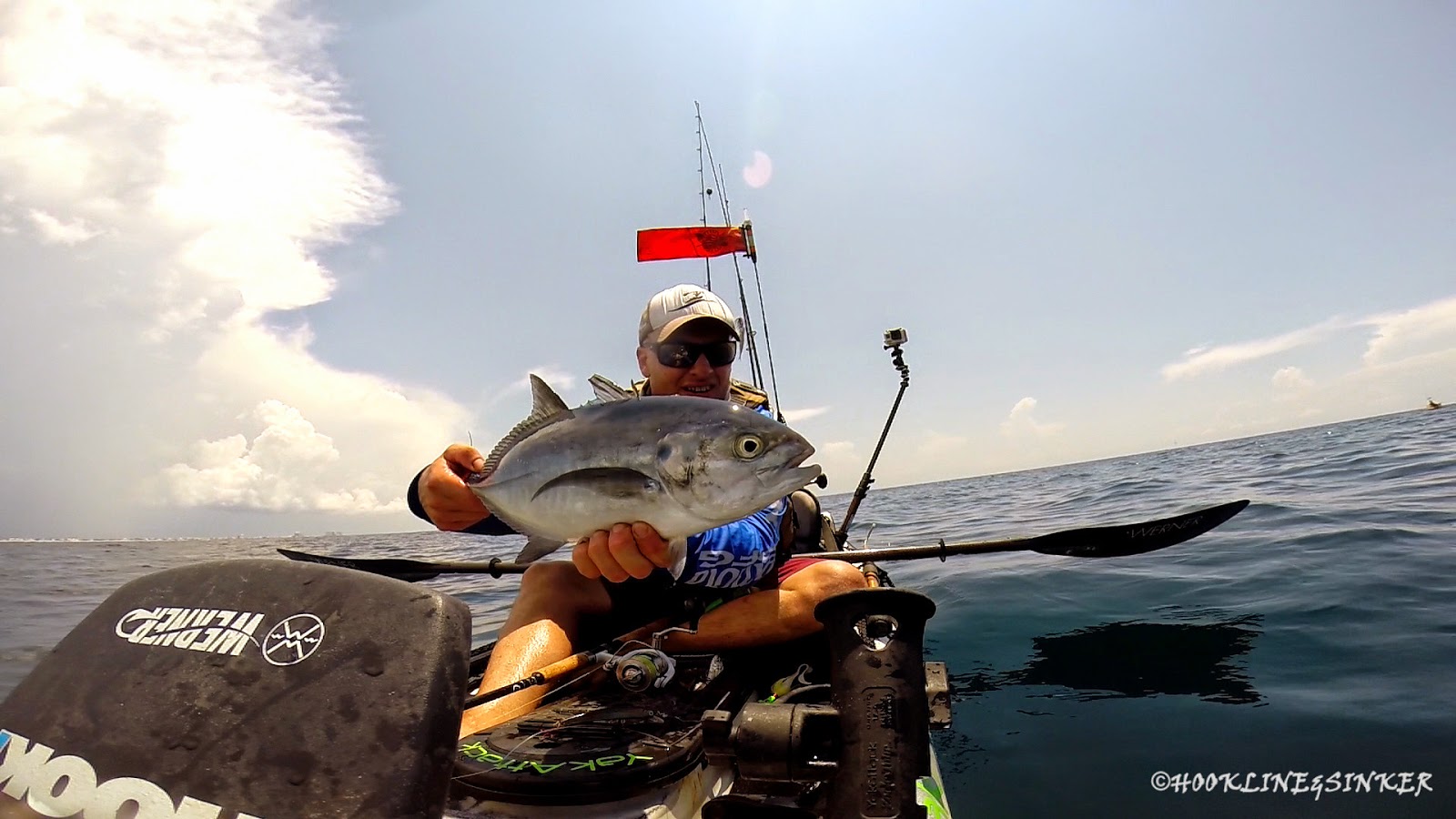 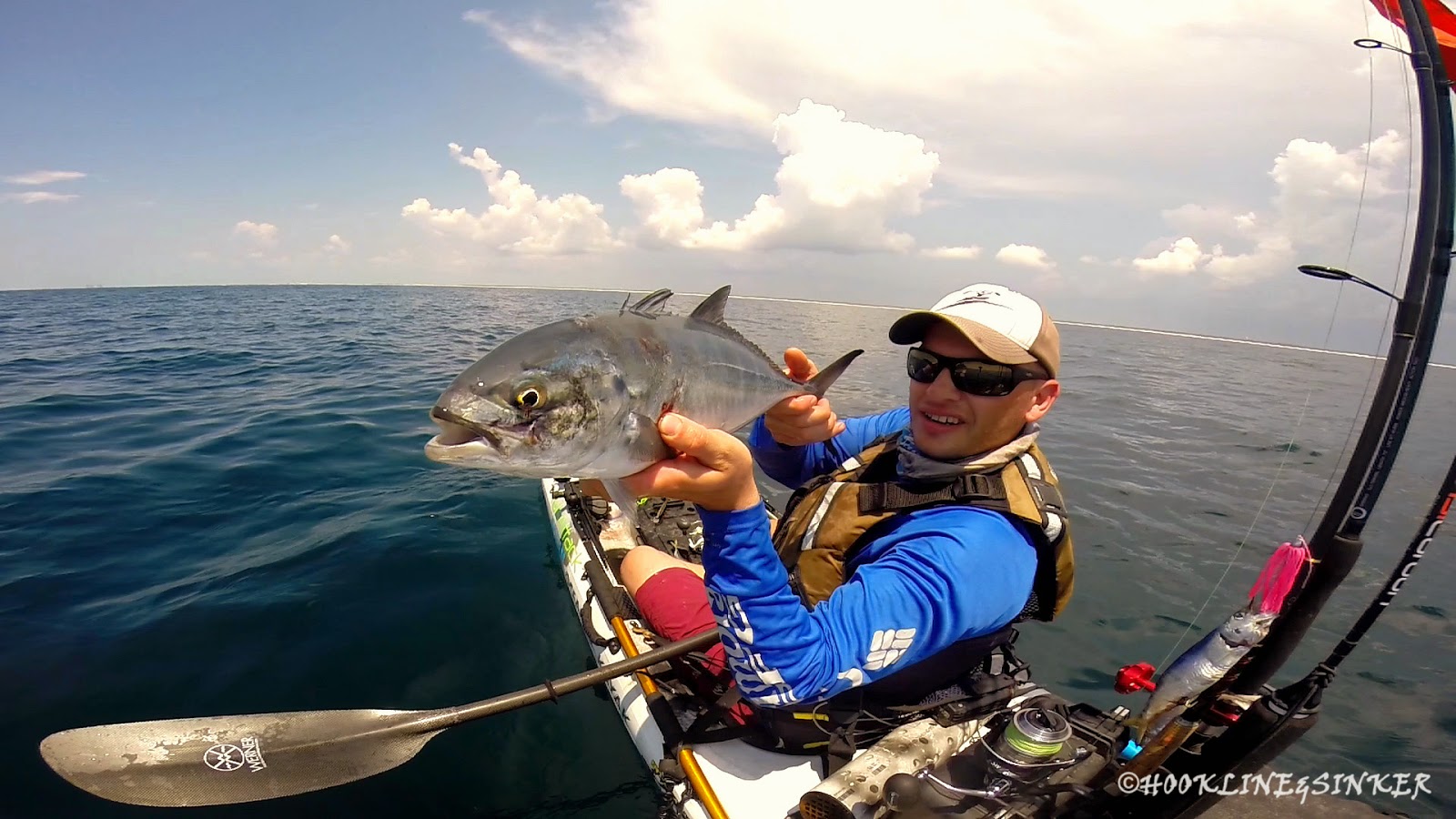 I was hooking up with cobia after cobia, but they were all between 24" - 30". You can't complain about catching a half dozen cobia from a kayak. Once we moved on from the small cobia, we saw more fish busting bait. This time it was mahi...teeny tiny mahi. 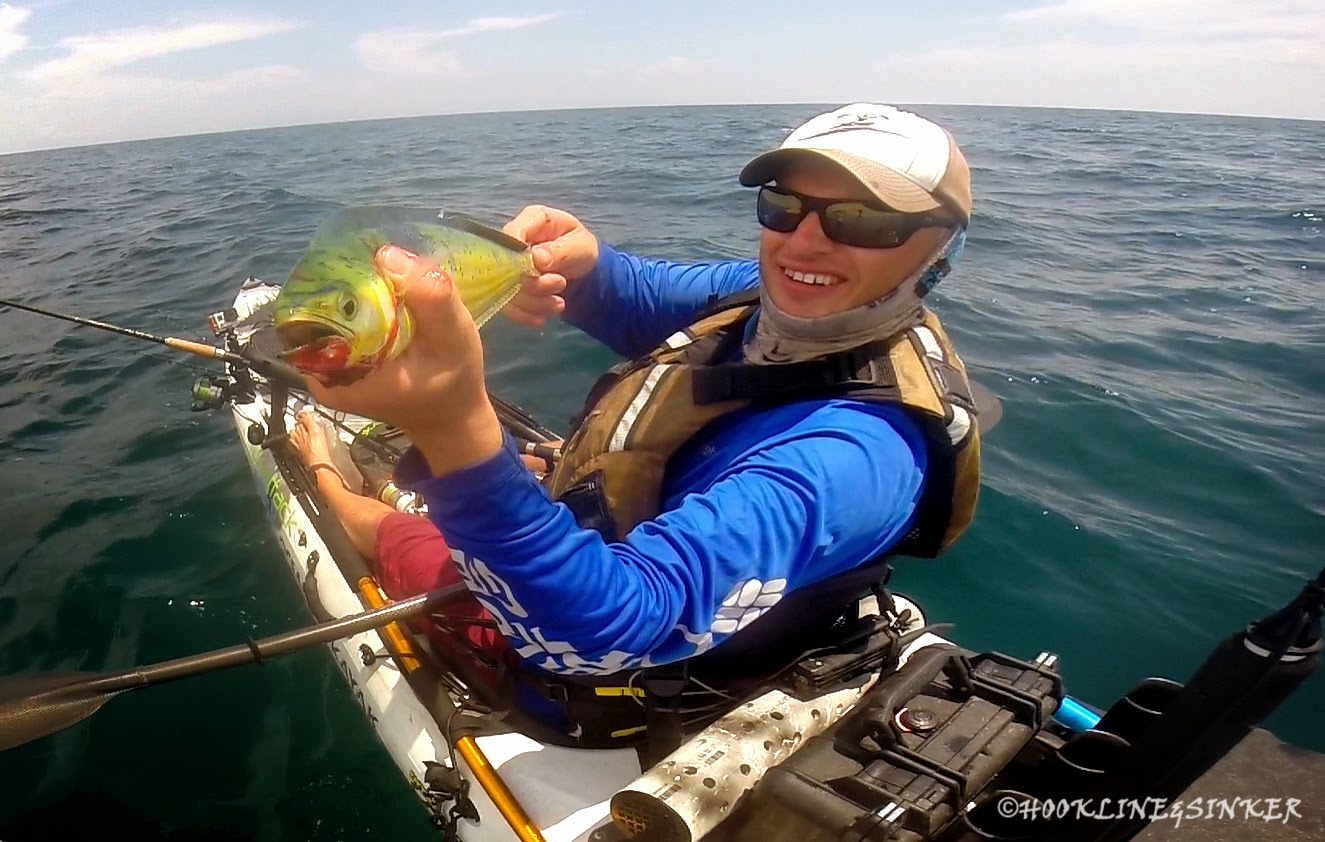 We got back to the beach without getting slammed by mother nature. It felt good having my first gulf trip under my belt. I learned a lot but still a lot to learn. Having friends and fishing partners like Marty help shorten the learning curve big time! I feel very fortunate and grateful! Marty said it best, "Today was REALLY slow for the gulf, but a slow day out here is still pretty good." Slow, haha! I can't wait to see a good day.

Well, one thing is for certain. This emerald water is going to be seeing a lot of Richie Bekolay! Be sure to check back as I'm sure it won't be too long before another adventure is logged.