One of the seasons that I have been anxiously awaiting is the arrival of the bull reds at the local bridge complexes. Having experienced this a couple of years ago when I was down here to visit, (see Battle of the Bulls), I was left with the burning desire to get back to it.
Last week, I headed out with Marty Mood, Brandon Barton, Matthew Vann, and Butch Newell for the first trip of the year. The conditions were nice, almost too nice! You want current moving and a little chop when you're doing this type of fishing. Anyways, we all got into fish but not the numbers we were hoping for. 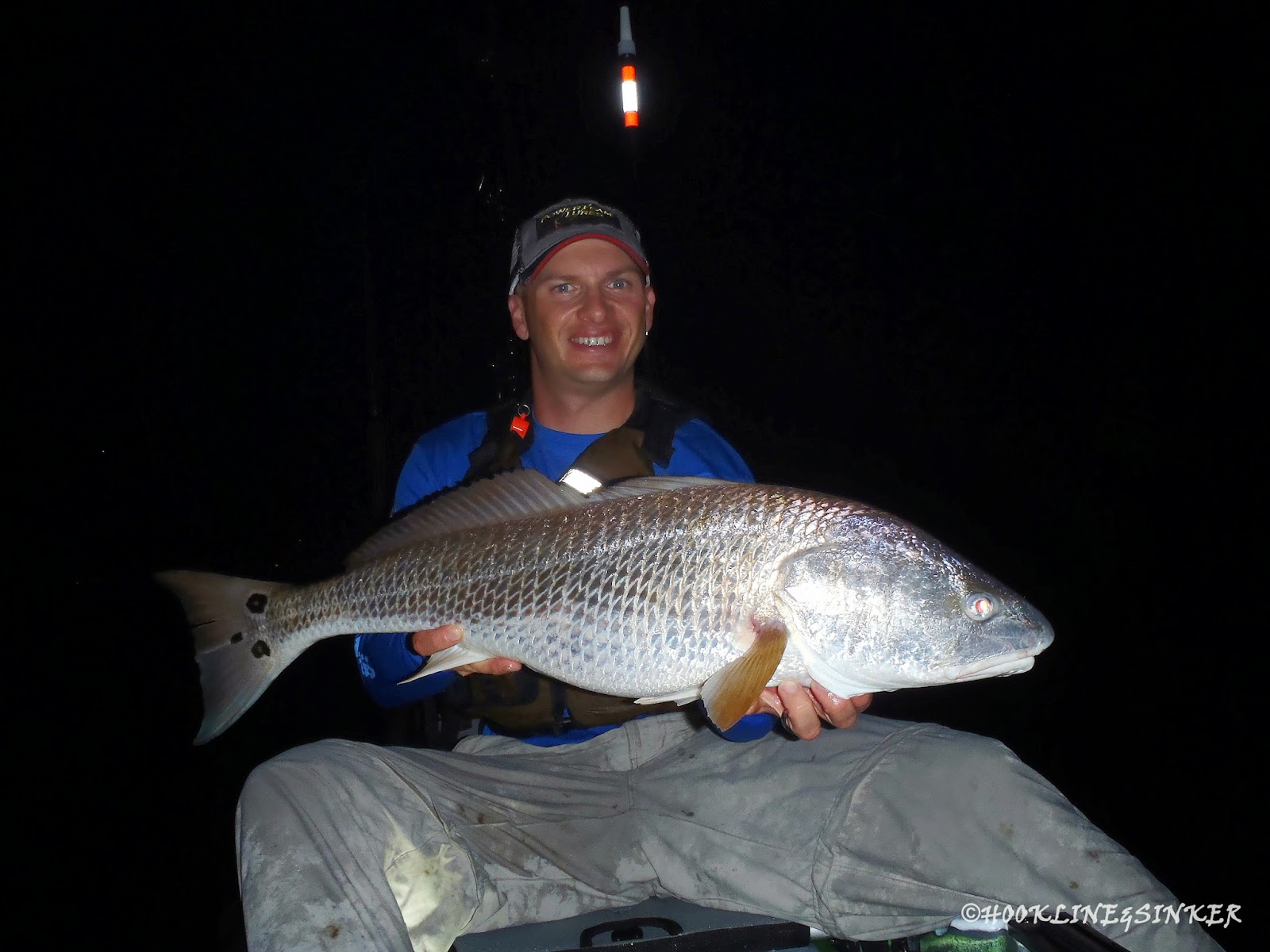 I had an open window the other night after work. The wind and tide matched up perfectly for a late night rendezvous. I planned on catching a couple of white trout to put on a circle hook so I could Carolina rig a live bait on the bottom while I casted soft plastics under the lights. Well, that plan didn't go as planned...
My 3.6 PowerTeam Lures JP Hammer Shad﻿ was meant to bounce the bottom for white trout. On my fourth cast, the Hammer Shad got pounded about 5 feet down in the water column. With crazy headshakes, I knew it was no white trout. Since I was using my medium action rod with Shimano Stradic FJ 2500, I knew I was in for a treat... 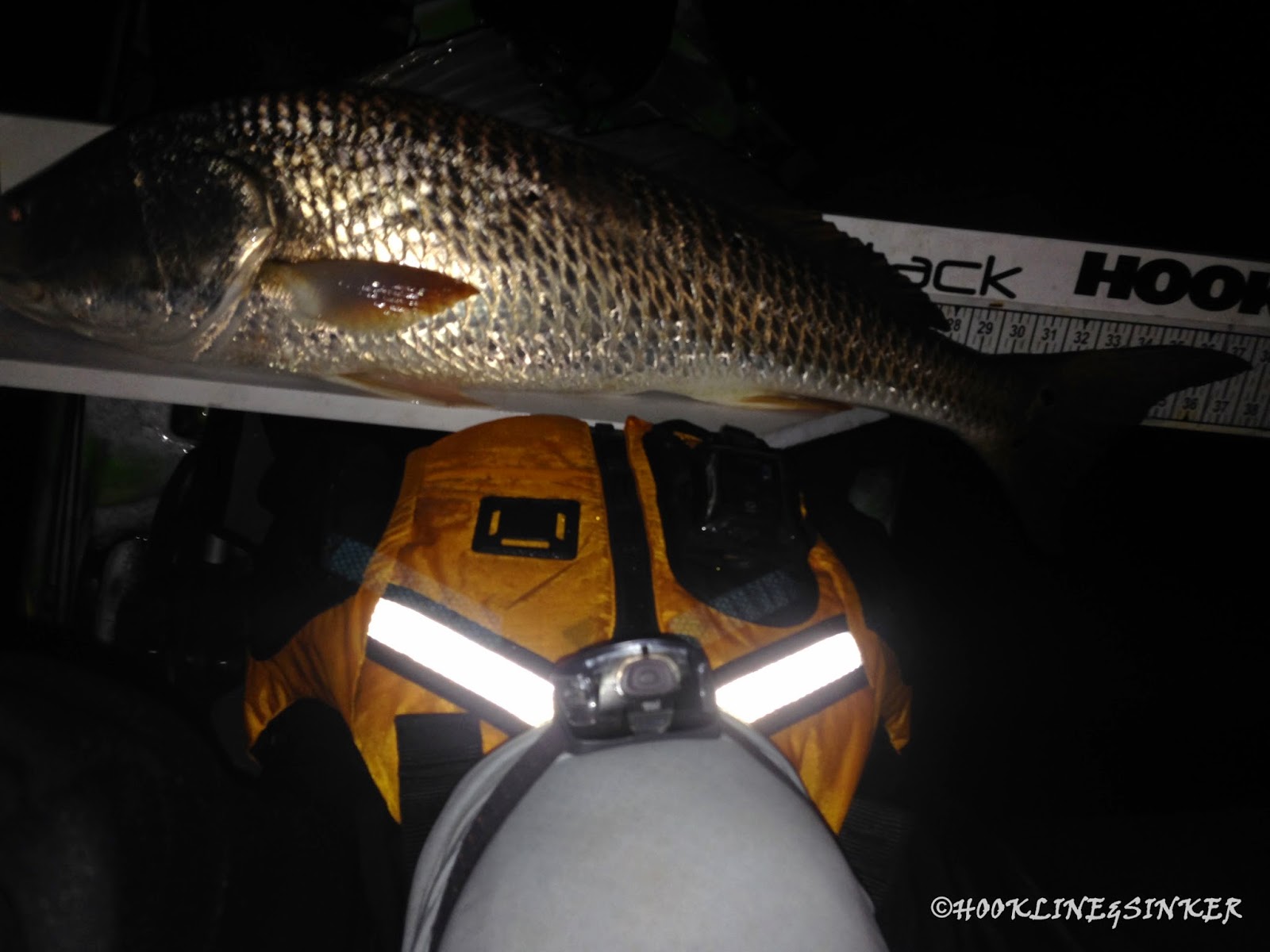 I had the 37 1/2" red in my lap, go to turn on my Olympus camera only to find the display reading "Battery F%$&ing Dead"...or something like that. Go figure, a nice fish in the lap and the only camera I have is the one on my IPhone. Well, something is better than nothing.
Boy oh Boy, I was licking my chops!!! To hell with the Carolina rigged live bait, I was going to hammer these fish with meanest paddle tail out there...the 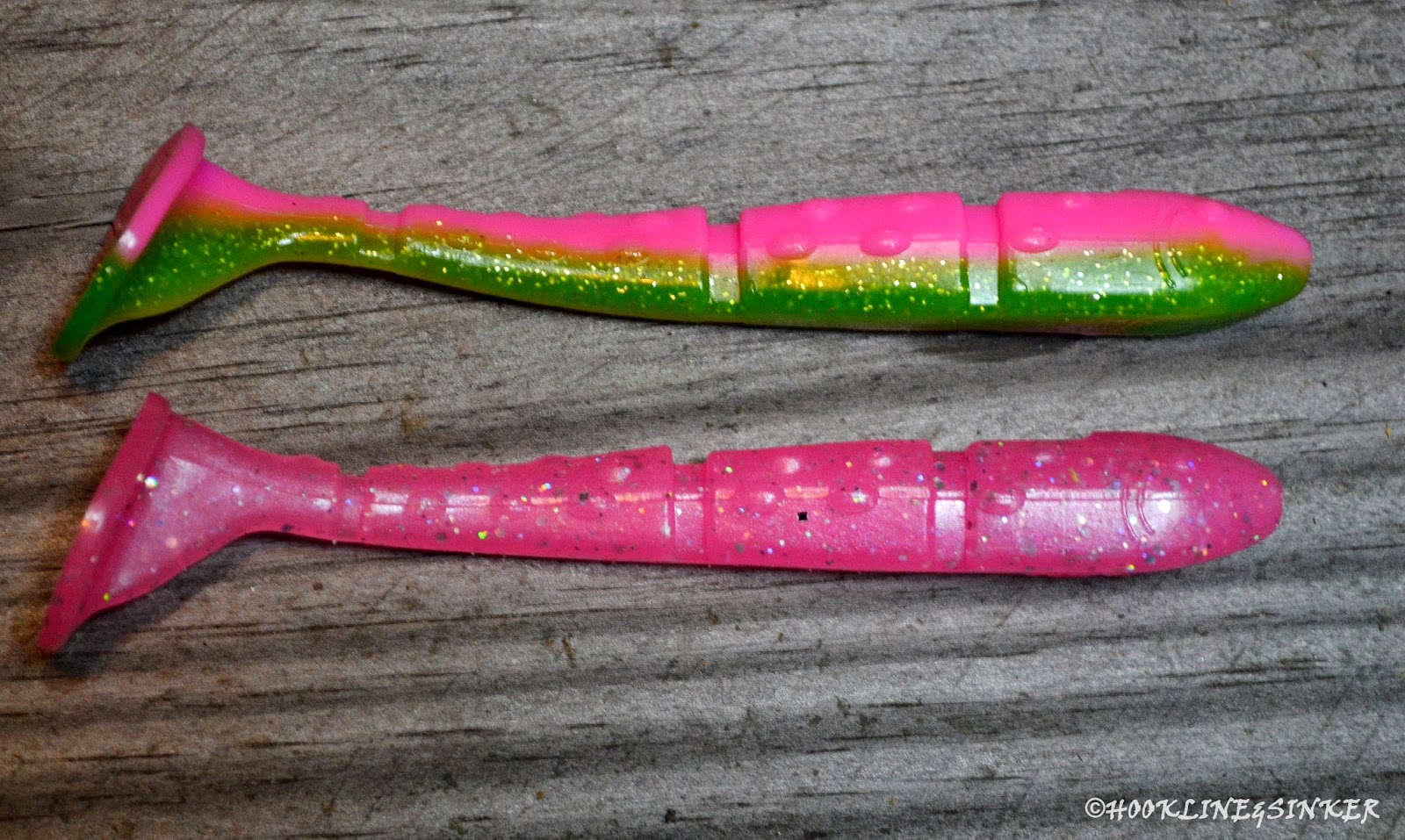 The Swinging Hammer, pictured above, in Electric Chicken (top) and Bubble Gum Flash (bottom), stand out big time under the lights. The over sized tail provides a crazy thump and believe me...it gets the attention of the big reds!
While I was adding the paddle tail to my 1/2oz jig, a red started crushing bait on the surface one light down from where I was at. Man, it's getting better and better!
As quick as I could get to the light and a bait in the water...it was on once again! 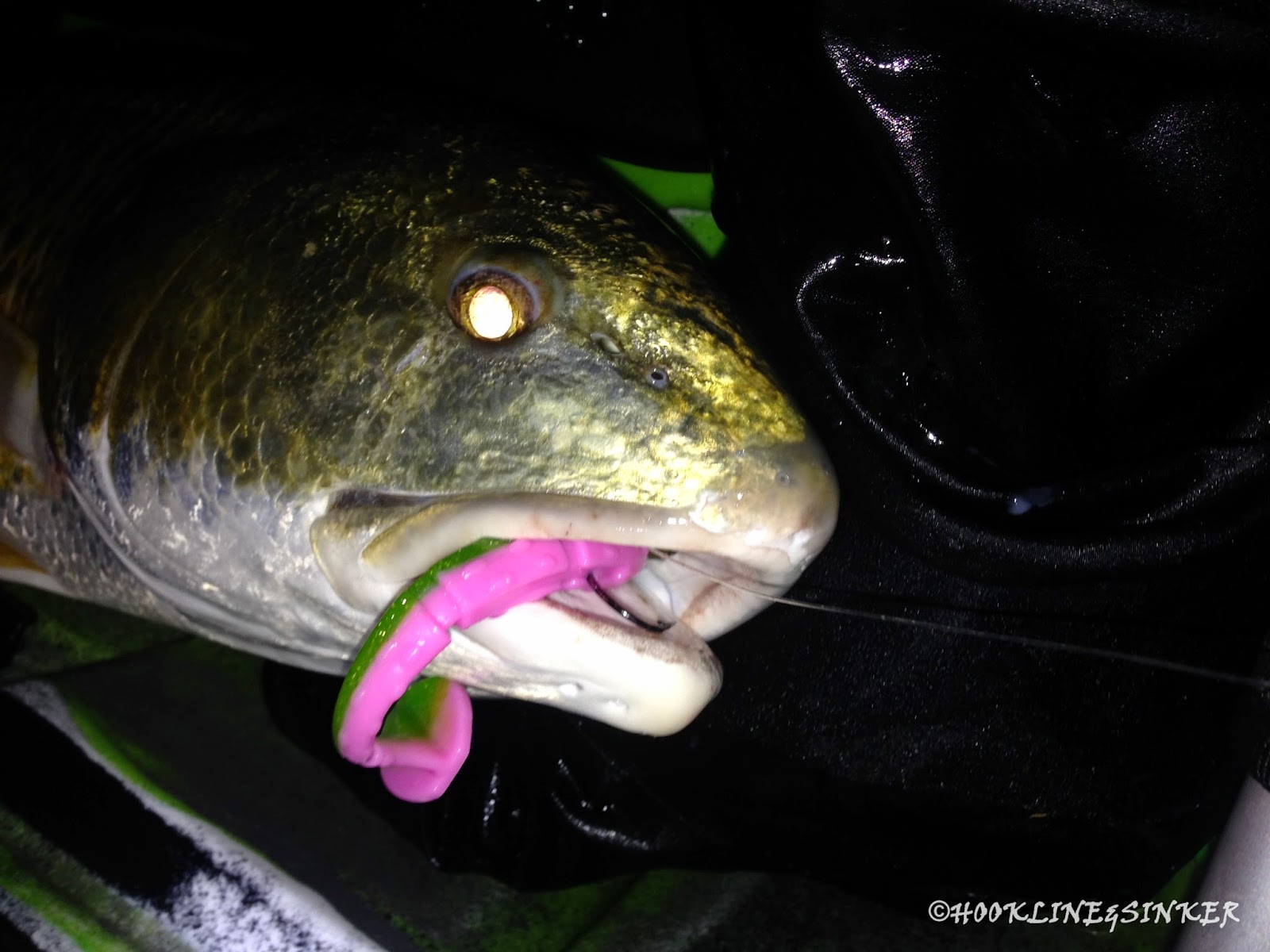 I proceeded to absolutely wear out the reds! It was non stop action! 10 minutes never went by without setting the hook into a feeding bull. 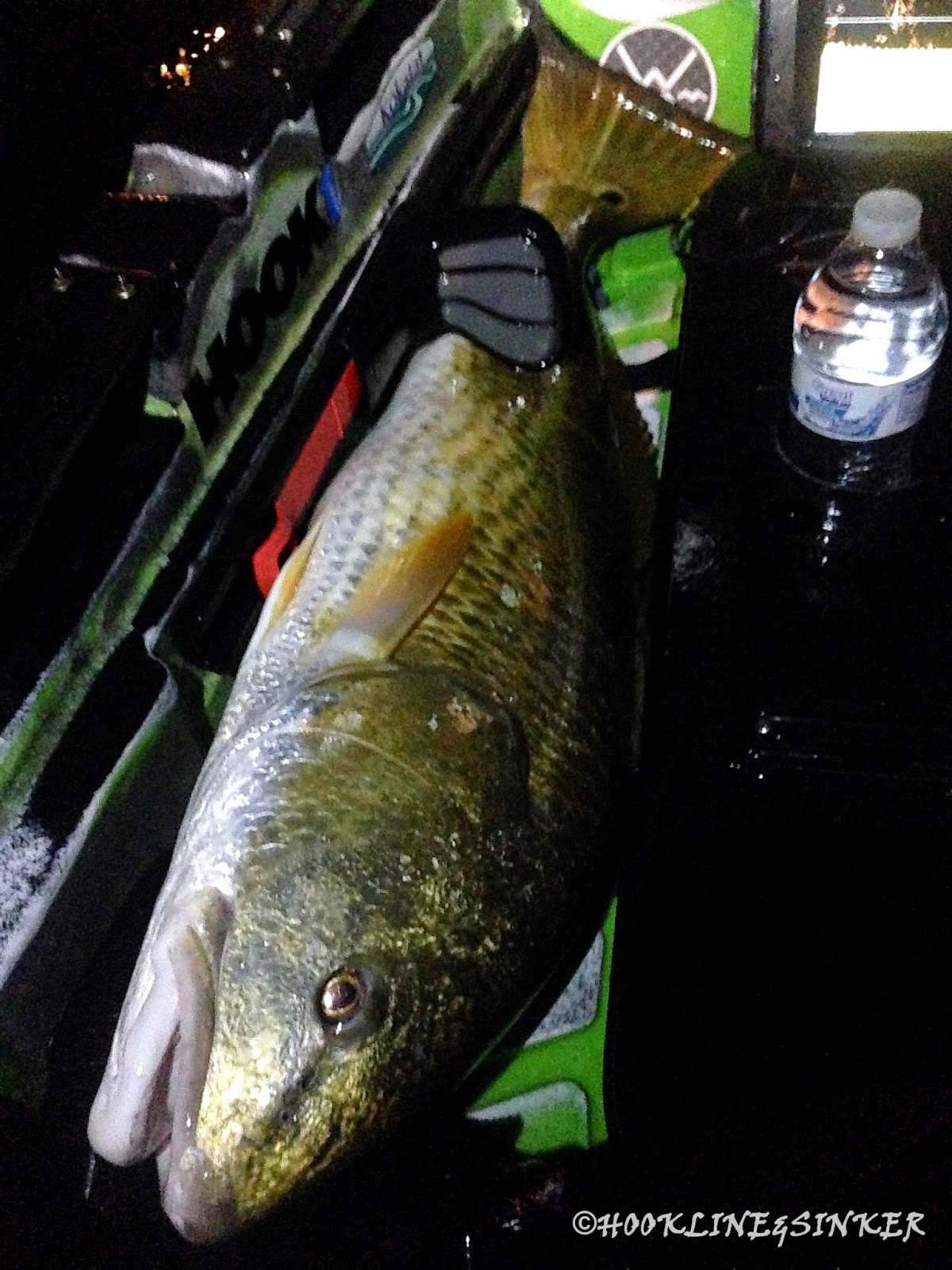 At one point, I actually caught 4 in 4 casts. I made my fifth cast only to have a minor knot in my Curado baitcaster. This meant my bait was dropping to the bottom without me being able to do anything.
Oh crap, please don't hit it please don't hit it...
BAM, zip zip...$#!@
I smoked the drag down and put the screws to the fish. I made sure that the fish never pulled enough drag to get to the knot. It worked out in the end. 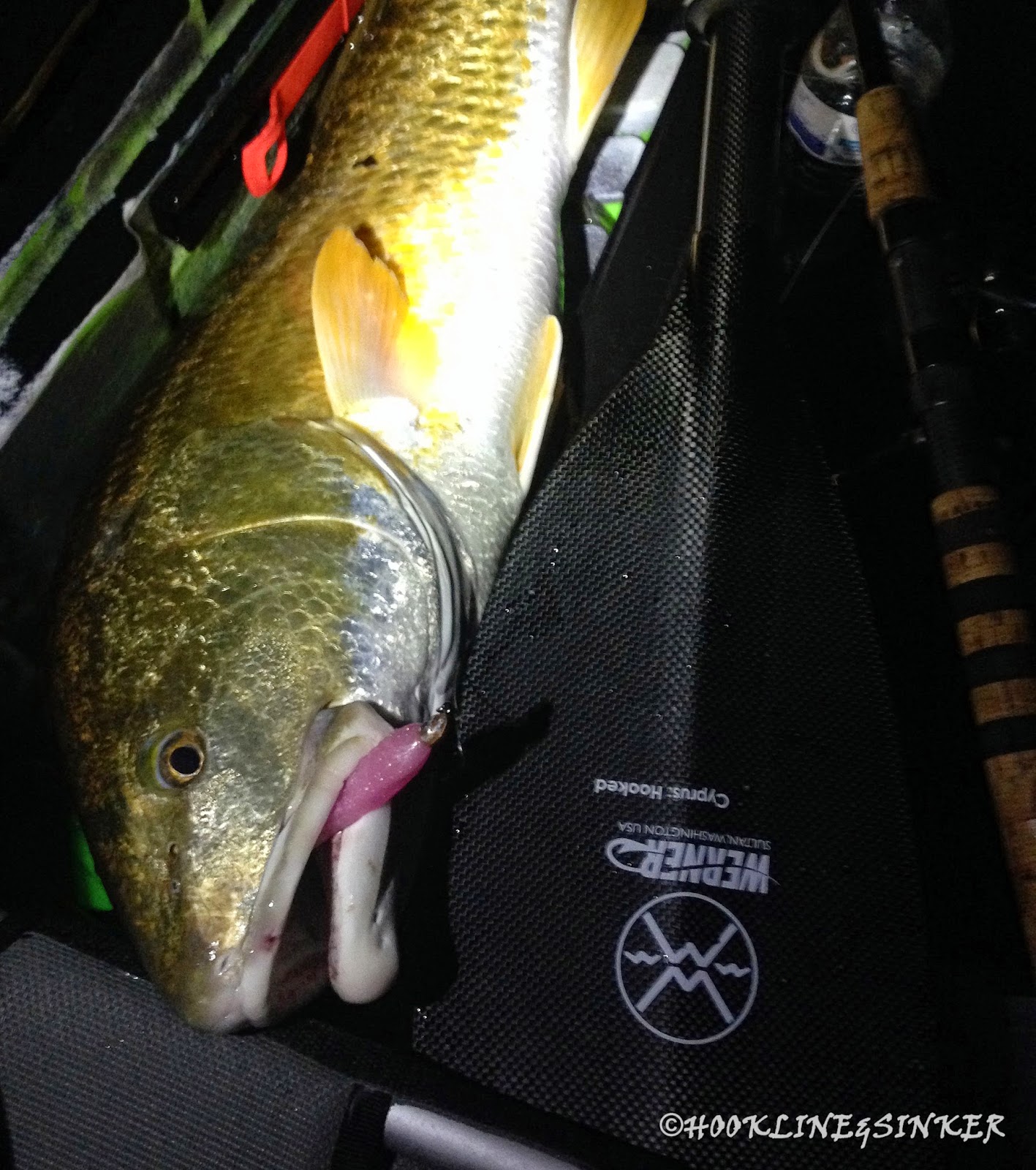 In 4 hours, I caught over 25 reds between 33" and 39.5". Nights like this don't happen often. The right conditions have to be present and most of all, the fish have to cooperate! Living less than 30 minutes from the bridge means it won't be the last time I drop the hammer...
Man, did I pick the wrong night to bring a dead camera.
~See ya on the water!﻿