The Challenge of Monster Tarpon

As the silver beast slowly made his way into the deep abyss, I sat there in awe by the beauty and utter size of this magnificent creature.

As anglers, we like a challenge. Think about it...even the beginner that buys a $20 setup at Walmart likes the challenge of catching a fish. It's much easier buying fresh fish to eat or spending the money on a "guaranteed" thrill. The challenge of fishing, whether big or small, is what consistently draws us back to the water time and time again.

When some anglers gain knowledge from experiences and the time they put in, they seemingly up the ante to the angling challenge. Speaking for myself, I've always wanted to "up my game" in the kayak fishing world. For example; I transitioned from fresh water to salt water, went from fishing protected bodies of water to the open ocean, and added the pursuit of larger species compared to being content on the species that I had dialed in.

My good friend and fishing partner, Marty Mood, and I had planned on going after these behemoths for some time now. We didn't waste the opportunity when our schedules finally aligned. We were armed with heavy artillery and a willingness to get the job done at all costs. The waters of Pensacola Florida welcomed us with open arms. Meticulously searching the surface finally yielded what we came there for. It didn't take long for Marty to yell, "FISH ON". Shortly after speaking his last word, a 100+ pound silver king explodes out of the water not 10 feet in front of me, almost landing in my kayak! WOW! From that point forward, the image of that monster tarpon was tattooed in the front of my memory bank. The fish ended up spitting the hook a few jumps later, but that moment fueled a newly lit fire.


It was on like Donkey Kong...I'm going to catch a tarpon!!!
I found myself going solo back to the same spot only a couple of days later. I couldn't stop thinking about these gigantic fish and the possibility of landing one from my kayak. Sight casting these fish at night, ALONE, and out of a kayak was by far the most challenging task I've yet to take on.
It didn't take long to make a cast on a monster, only to have the fish pay no attention. I saw another fish, only to have the same result. Instead of getting frustrated, I changed up the retrieve, that didn't work. I changed up the speed, that didn't work. I changed the depth of the lure, that didn't work. When I changed out to a different pattern...
Watching a monster tarpon follow his line, I waited to lead him with a perfect cast. The big soft plastic met his line of sight at the right time...BOOM, FISH ON! The sheer power of these fish is indescribable! My Old Town Predator 13 took off like a bat out of hell! When the huge tarpon jumped for the first time, my jawed dropped! ﻿
﻿
. 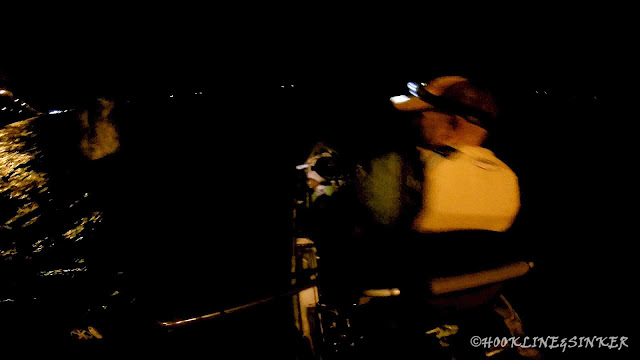 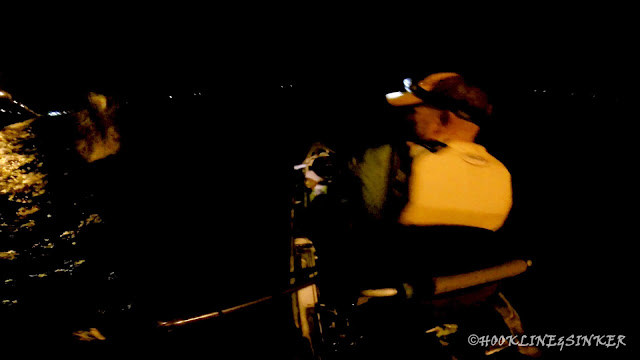 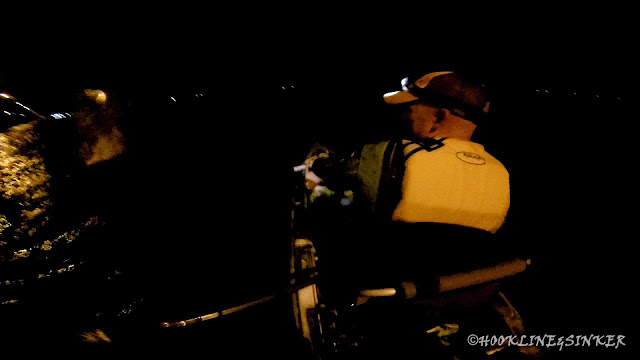 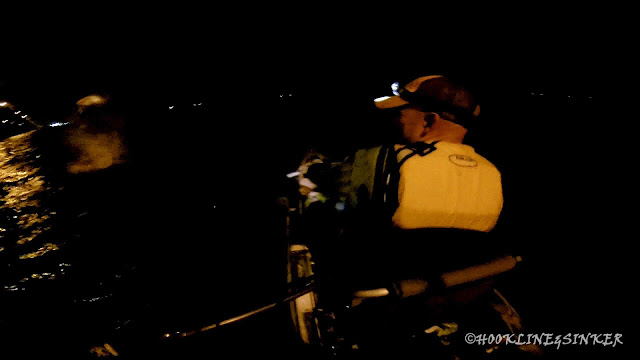 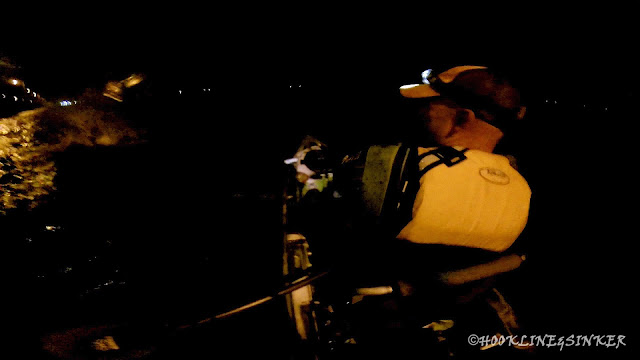 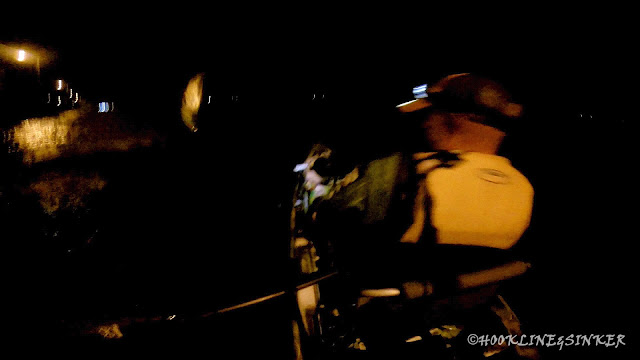 The fish made run after run, jump after jump! 15 minutes or so go by and I finally see my leader with the emerging silver color in the beam of my head lamp. Finally, the fish is parallel with my kayak and I grab the leader. Knowing that if the fish makes a run that I won't be able to stop it, I grab the leader instead of wrapping my hand, good thing. As I grab the leader to gather the last two feet of line, he makes another run while soaking me in the process. Just as the line went tight, POP! My 80lb leader was cut like butter. My guess was it was wrapped in his gill plate when I went for the leader grab.

I tied on a new Tactical Anglers Clip to a fresh stretch of leader and went back at it. I already felt victory in my mind. Even though my hands were not locked on his jaws, I felt that I had won. At this point, I was as confident as anyone could be. Still respecting the power and size of these fish, I went right back it.

A few more fish showed themselves and showed no interest to my presentation. A perfect cast was the ticket on a fish that I previously threw at. FISH ON once again! This time the big tarpon made zig-zag runs in between the bridge and finally got the best of me. I opened the bail once I felt the line rub but it was too late. POP!

There is a reason that a big tarpon out of a kayak is considered tough. Even when you think you're in control, you're not! I regrouped and went back at it. This time I was towards the end of trip since it was so late. I continued standing up while scanning the surface. I finally saw another small group of huge fish. It only took one cast that ended up being The Cast.

My bait was slammed and in seconds a giant tarpon was shooting out of water! This time the fish headed away from the bridge only to double back and head right for it. I locked the drag of my Shimano Stradic 5000FJ to stay with the fish as best as I could. Once it cleared the other side of the bridge, it made a hard left and ripped a ton of line off as it doubled back once again. I could feel the line rub the pilings once again. Thinking to myself, Damn it not again, I opened my bail and pulled a ton of line out. I then paddled my butt off down two sets of pilings and slowly gathered my line back hoping to feel weight. I then saw my slack line traveling in between a piling set headed to the other side. Instead of putting the screws to the fish again, I gathered the line to stay on top of the fish, but not too piss him off. I one arm paddled with my Werner "Hooked" Cyprus about 100 feet with the fish away from the bridge. I engaged the reel and gave him hell once again. ROUND TWO...FIGHT!

Run after run, jump after jump, this fish was not giving up. After 18 minutes, I finally feel the fish swimming slowly as I pumped him up to the surface. He had one more jump with about 10 feet of line out. He was literally a couple of feet from hitting the Predator. After that jump, it was all she wrote. I grabbed the leader, and got my hand on the massive jaw.


HOLY $#!T, I JUST LANDED A HUGE TARPON!
Now the fun part...holding the jaw with one hand and setting up the picture with another. THANK GOD for the YakAttack Panfish Portrait! Without it, I wouldn't have been able to get the shot! 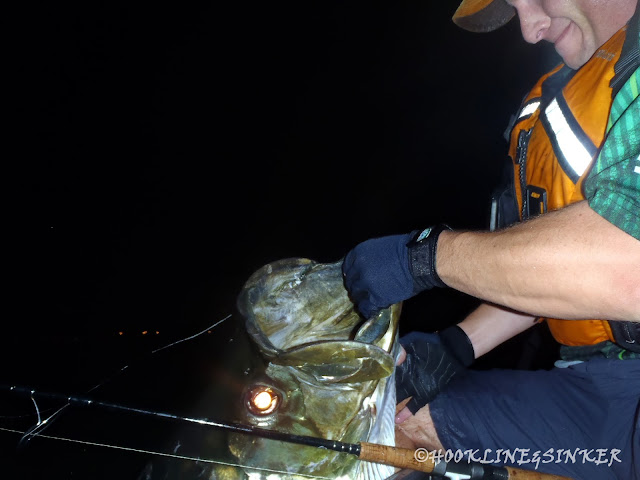 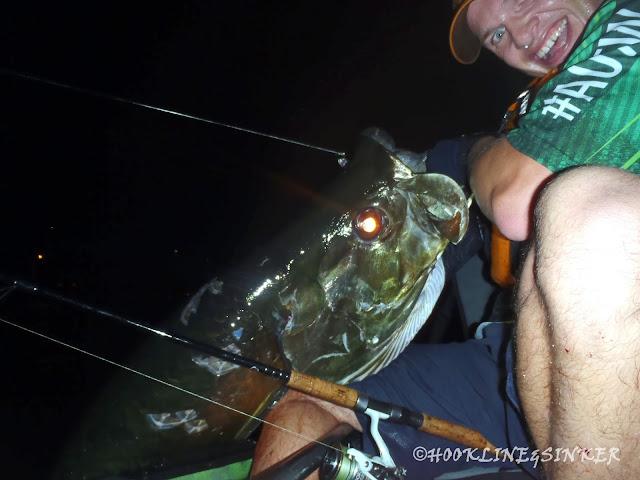 The pictures are not the greatest, but there was not much I could do. After the second picture, the hook came out and the fish shook out of my hands as I setup the third picture. I didn't care!
At the end of day I was left paddling back to the ramp yelling aimlessly with the feeling of accomplishment driven by pure adrenaline. I was still shaking for a couple of hours and could not go to sleep until the sun started to light the horizon.
"The newly found respect for that creature is something that I have for no other. I'm grateful for the opportunity to tangle with the silver king."
~See ya on the Water!
GEAR USED:Rods: Shimano Terez, 7' Med Hvy
Reels: Shimano Stradic 5000FJ
Line: 65lb Power Pro, 80lb leader
Lures: Big Soft Plastics
Kayak: Old Town Predator 13
Paddle: Werner Paddles 240cm "Hooked" Cyprus
Apparel: Kokatat Destination Paddling Trunks and Kokatat Lightweight Gloves
PFD: Kokatat Bahia Tour
Accessories: YakAttack Panfish Portrait, YakAttack GearTrac, YakAttack VisiCarbon Pro
﻿
Posted by Richie at 2:00 PM