There are a few things in life that you cherish every second of.
Those moments are different for everybody, but in the end, everybody experiences the moment when you wish time stood still.

It's no secret that I have a passion for the water an everything that goes with it. Sharing that passion with those that are close to you takes the experience to a whole new indescribable level. It's sort of a warm fuzzy with a slight bit of euphoria mixed in.
Over Labor Day weekend, my best friend and brother-in-law, Duke Herman, made a stop at Casa De-Bekolay in Navarre Florida for a some R&R, cold beer, and a little offshore kayak fishing. Duke has never kayak fished before so it was only right to start him off by going a few miles into the Gulf of Mexico. Along with Duke, my wife Amanda Kaye, has never been kayak fishing offshore. Time to make this a family outing. 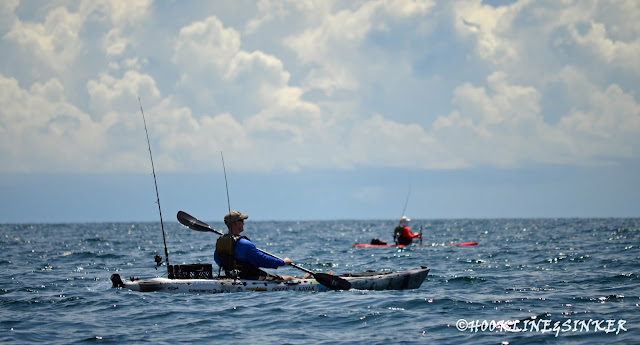 We launched with little expectations other than hopefully hooking up with a fish while spending time together. The mahi bite has been on fire so we were hoping that our trolling rigs would entice a strike.
Amanda was the first, and only one, to hook up with a nice mahi on a cigar minnow tipped duster rig. The fish gave her one hell of a fight! It was tough to try and land the fish for her so I made the best attempt at gaffing it when I came close to the surface. I struck a little of the fish but not enough to stick. Before we could get the beautiful mahi on the gaff, it pulled the hook with another crazy run. That was it for that day. 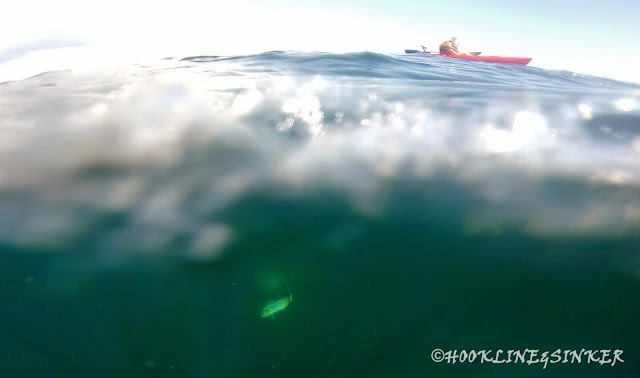 Duke and I had a strategic plan for Saturday. Since this was the second season red snapper opener, we wanted to take advantage of it. The plan was to get a limit of snapper, then troll for pelagics.
We launched at day break and caught a lot of bait in no time. Stuffed bait tubes meant it was time to head to the snapper spot. Less than a 1/2 mile away from the reef a power boat motors in, drops anchor, and sets up to spear fish.
You got to be F&#%!@G kidding me!﻿
﻿
It made no sense to try and fish that spot so we let out our trolling lines and paddled back towards the beach. The trolling bite was tough but I was able to get a nice mahi to give us a nice aerial display. It's always fun watching a mahi give you jump after jump!
As we were trolling, we noticed the spear fishing boat headed off the spot leaving the reef vacant. We kept trolling to no avail and decided to make way back to the reef. The draw of the red snapper was just too strong!
Just as scripted, my Humminbird 698 HD SI lit up like a Christmas tree when I got on the spot. Snapper and trigger fish were everywhere! We threw out chunk bait with weightless circle hooks and held on. Duke hooked up and immediately had his rod tipped yanked into the water by a strong red snapper!
﻿ 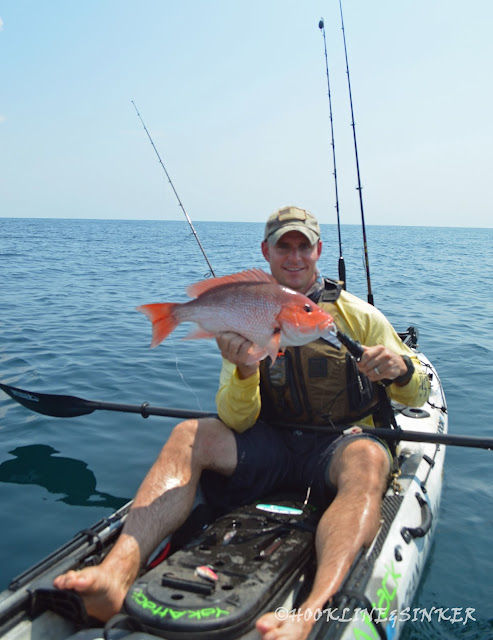 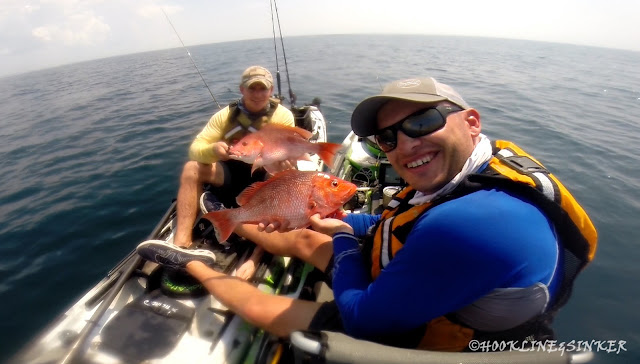 We got our 2 man limit of red snapper (2 fish a piece) and headed back to the beach. The sun was blistering and we were wore out! With a mahi and 4 decent sized red snappers in the ole' Death Chamber, it was time for some hot wings and cold beer! 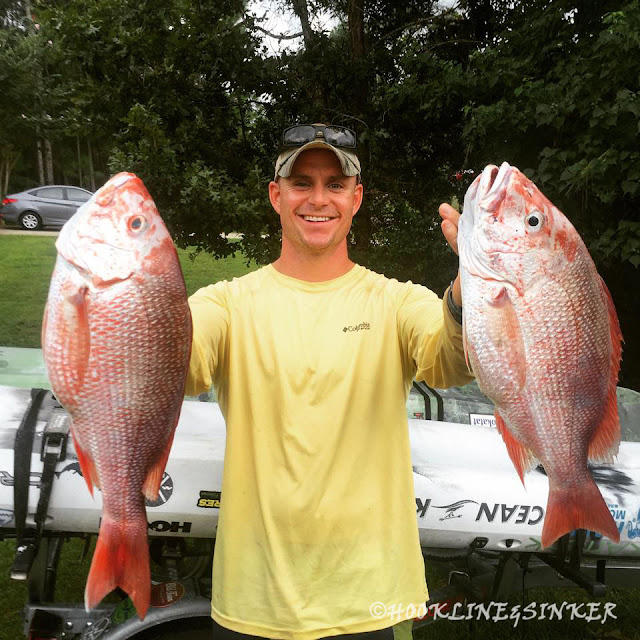 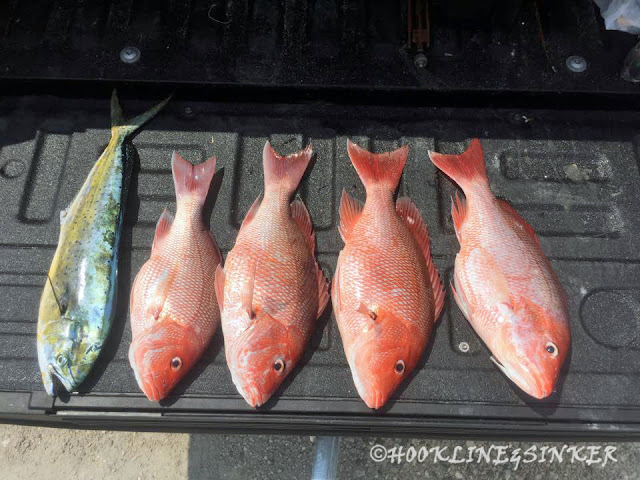 Sadly, Duke had to leave but not after he got his first limit of kayak red snapper. Well done brother! Monday rolled around and Amanda and I decided to fish the last few hours of daylight when the winds were supposed to lay down.

We launched and headed to the end of the second bar. In no time, I hear, "I got one". I paddle over to see her fighting a nice spanish mackerel. Her first fish landed offshore! 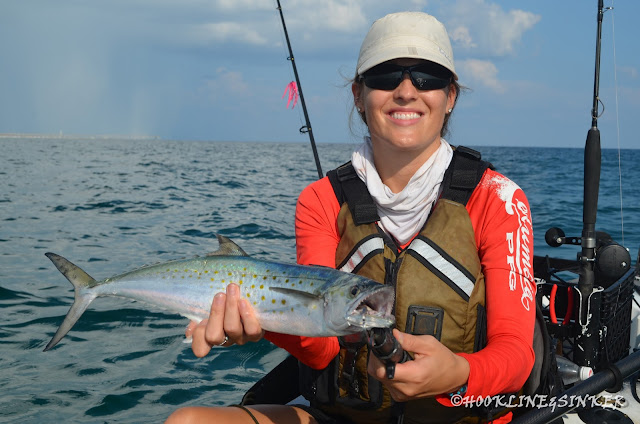 She follows that fish up with a second spanish mackerel as we paddled to the snapper spot. Damn, my wife is out-fishing me. I'm down 0-2 at this point. Amanda had the hot hand which was fine by me! I was loving watching her fight and land these beautiful fish.

We got to the snapper spot with high hopes. The sun was slowly setting and the reef was covered in suspended red snapper and trigger fish. Both armed with chunk baited circle hooks, I carpet bombed the surface with handfuls of fresh chunk bait as we deployed our baits in the mix. Wouldn't you know it, Amanda's rod doubles over. I thought it was a good snapper only to be surprised by the biggest trigger fish that I have ever seen! 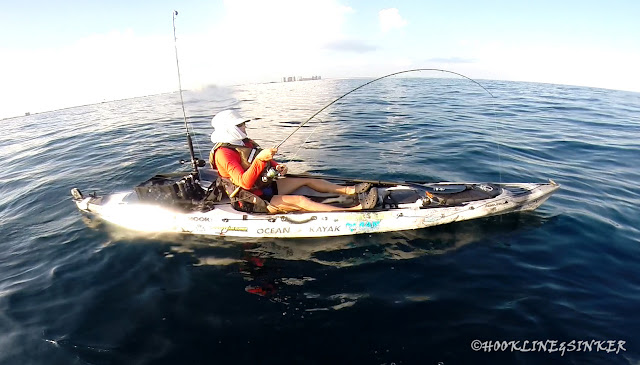 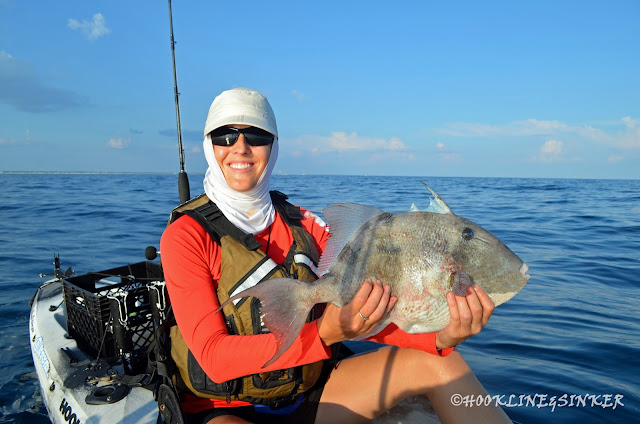 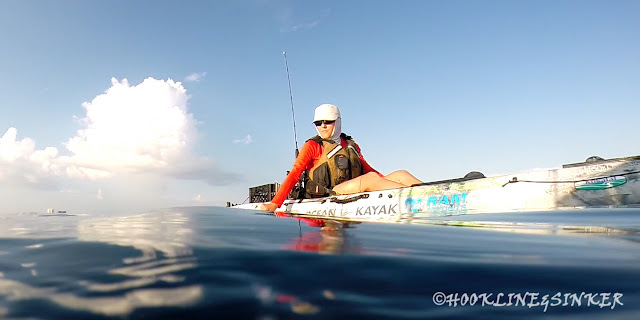 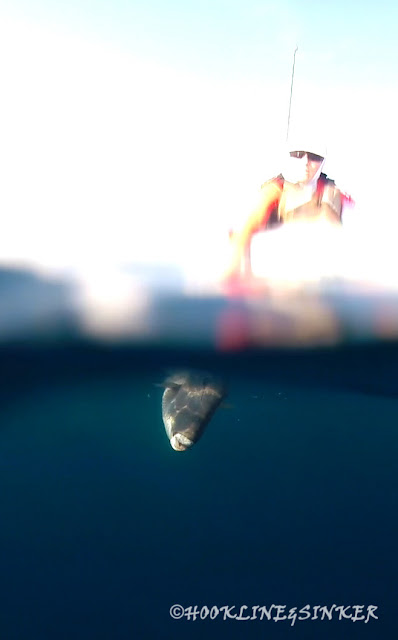 At this point, I'm as giddy as I could be! It was so cool watching Amanda fight this huge trigger! The fish gave her numerous runs that pinned the rod on the side of the kayak as the drag was getting ripped out.

With an activated feeding frenzy, we wasted no time in re-baiting and getting back after it! Another round of handfuls of chunks with our baits mixed in... 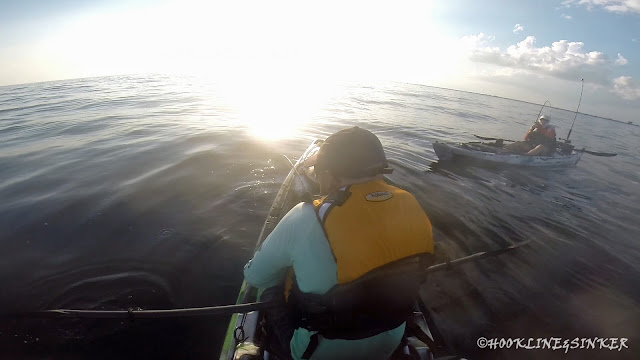 Drags were screaming and rods were bowed over! These red snapper gave us a blood pumping battle to be remembered! 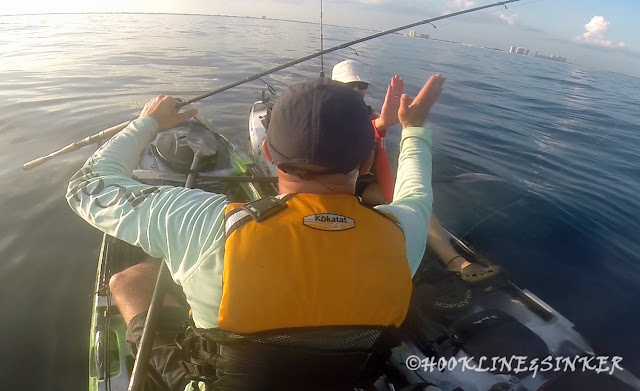 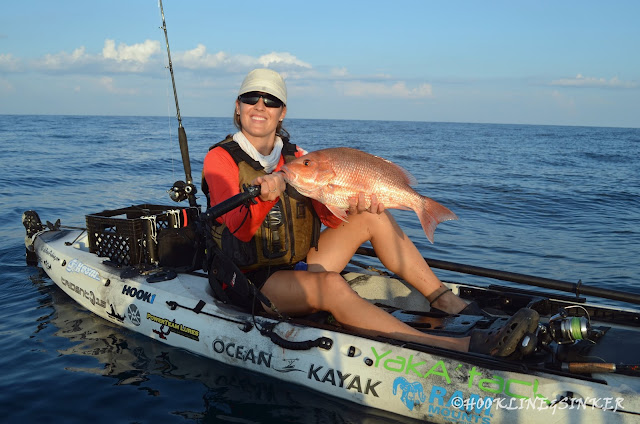 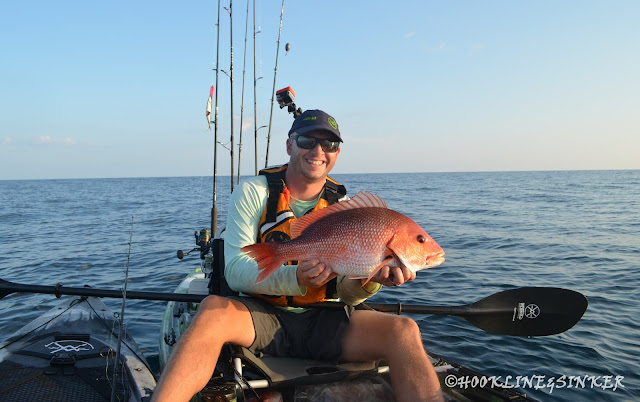 The sun was setting and it was time to head in. The light was fading leaving a beautiful sunset to cap off an afternoon of fishing that I will never forget. Spending precious time with your loved ones while doing something that you love is beyond words. Seeing the look on Amanda's face said it all. Not only did we spend valuable time together, we had a great an amazing experience with the double on red snapper.
What a fitting way to end an amazing weekend. Duke and Amanda got their first fish out of a kayak offshore and we were able to spend time together filled with jokes and laughter. One thing is for certain...
I can't wait to spend more family time offshore!
﻿ 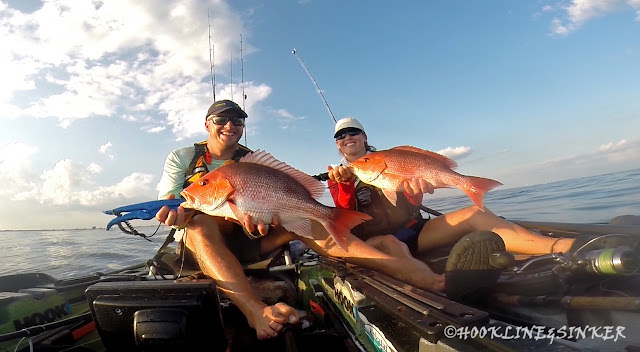