Wiping the crustys out of the eyes following the evil sound of a smart phone alarm at 3am is normally a downright miserable experience...unless the alarm is for fishing of course! 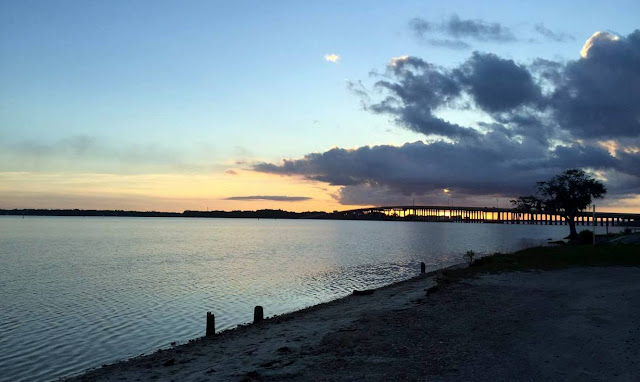 I would say that I'm pretty easy goin' in my day to day endeavors. Though there are a handful of things that I take pretty serious; work, family, health, and fishing tournaments. The first 3 of those go without saying, but when it comes to tournament fishing...I don't mess around!

The Emerald Coast Professional Redfish Series is based out of Panama City, Florida and consists of 4 events; 3 separate one day events leading up to a two day Championship to close out the year. This is the first year that kayaks are fishing this series even though the tournament is not new in itself. Having a few weeks off of work following my deployment allowed me to have the opportunity to prepare for the 2nd event of 2016. 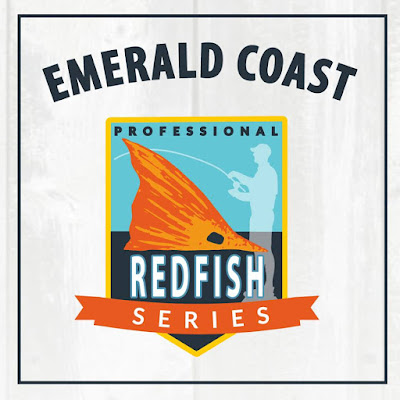 The "rules of the road" are like any traditional kayak fishing tournament. Scoring for this series is the aggregate length of 1 redfish plus 1 speckled trout, pretty straight forward. This is where strategy comes to play. Does an angler target speckled trout first then go for reds, or vise versa? Verifying the tides, weather forecast, time of year, etc. all come into play for an angler formulating their gameplan.

"Practice how you play" is what I go by for tournament fishing. I like to get into a mental routine during pre-fishing as if it was game day. The alarm is set before the a$$ crack of dawn, everything is rigged and ready to go, and my spots have been well thought out. Hitting the welcoming waters for the first day of pre-fishing always gives me a rush! 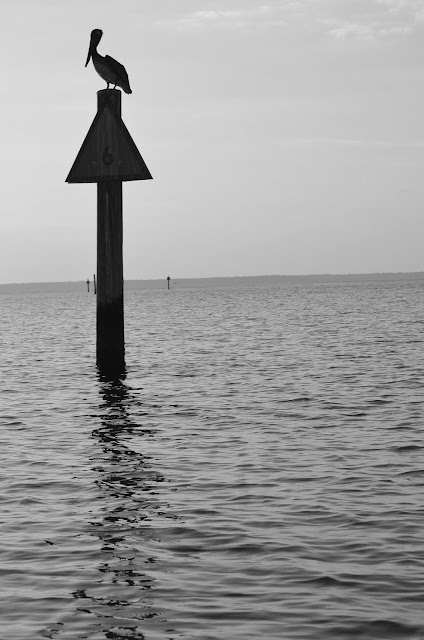 My good friend and fellow YakAttack Fishing Team member, Marty Mood, and I had discussed numerous spots and strategies leading up to the event. I was pre-fishing a couple of spots near our homes that we talked about checking out for good sized speckled trout. The first couple of days of pre-fishing yielded some good numbers of speckled trout up to 20", not too shabby. The only issue with this place was that the boat traffic would be a higher on a Saturday. "No Bueno" for a good trout bite!

The executive decision to fish near the weigh-in location was made to optimize our time on the water. Starting from scratch in an area that you're unfamiliar with can be difficult. Utilizing technology to the finest, we came up with a handful of spots to pick from.

The first of the spots coughed up dink trout after dink trout. Throwing the kitchen sink at them and catching the same class of fish was not helping out this spot at all. I went a little deeper while throwing a suspending jerkbait only to catch...a dink flattie. Time to pack up and move along. 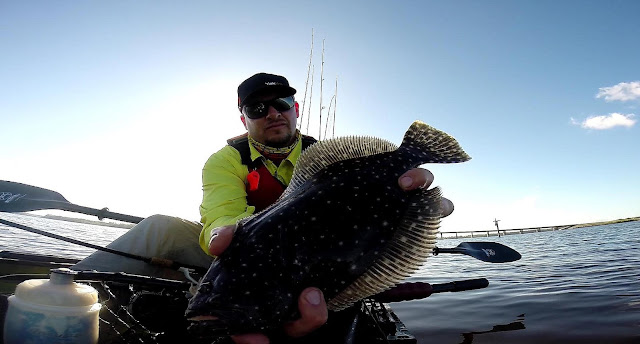 The sun was pretty high, the temperature was borderline punishing, and my confidence was slightly beginning to fade. But, a new spot always brings the "you never know" feeling. I used the tide and wind to drift over a grass flat point. Less than 5 casts in, my Tactical Anglers Crossover topwater lure was crushed. The immediate relentless headshakin' that ensued had me smiling because I knew what was on the other end.


Shortly after releasing the speck, my topwater was blown up again by a nice fish but didn't hook up. I parked the Predator 13 and waded the point. The reason behind wading was pretty simple; big trout will not bite when they know you're there. Stealth was now the name of the game and I was figuring out the game at this new spot.


Knowing this spot held good fish, I moved on to scout out other areas. I caught some more dink trout and lady fish which pretty much sold me on the spot that I just left. With the top end of the incoming tide, I took the opportunity to sight fish a couple of areas looking for redfish. 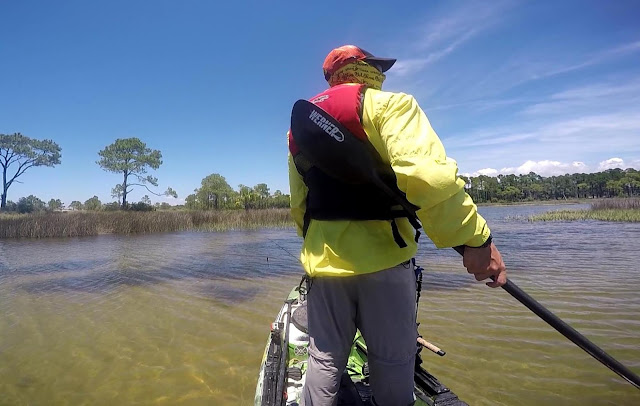 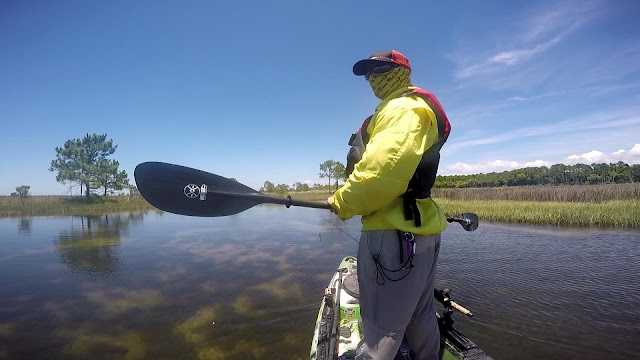 As fishy as this spot looked, I didn't see a single redfish. I felt my phone vibrate in my Bahia Predator PFD and it was Marty. Opening the message gave another boost of confidence since I saw Marty with a nice Florida bull red from the spot he was pre-fishing. With a sweat-drenched buff and a luke-warm water bottle, it was time to call it a day. Even though the day started early and was far from easy, I felt pretty good going into tournament day.


At the Captains Meeting at Four Winds Grill, Marty and I met up with friends; Brandon Barton, Matthew Vann, Benton Parrot, and Ryan McNeil. The beer was cold and the food was phenomenal! I think the price of the entry fee was worth the dinner itself.
Tournament day rolled around and we hit the water with a little pep in our steps. First cast at the trout spot...twitch twitch twitch BOOM...DAMN! The fish was on for a couple of seconds of headshakes before he threw the lure. I could tell right away that it was a decent trout. That set the tone for what would be a very...LONG...day. Dink trout after dink trout were the theme. I went the entire morning up until our "drop dead" time at this spot with small trout and nothing to put on the board. Needless to say, I was shocked. Marty previously picked up a slot red and managed to catch a 17.5" trout about 30 yards from the launch on our way in. It wasn't a stud, but he was at least on the board going into our spot for bull reds.
Picking up where I left off, it was another tough grind. Time ticked away with only minutes left. I was bouncing the bottom with a Gulp tipped jig when my lure was pounded. My rod buckled over and drag started ripping. This was a BIG fish! Run after run, this fish got the best of me. I couldn't keep him away from the structure and my 50lb fluorocarbon leader popped. I can't say it was a bull red because I never saw it. What I can say is that I have caught enough bulls down here in Florida to know that if it was a bull red, it was a stud! Anyways, that was it, our time was up. The paddle back to the launch left me dumbfounded to say the least. 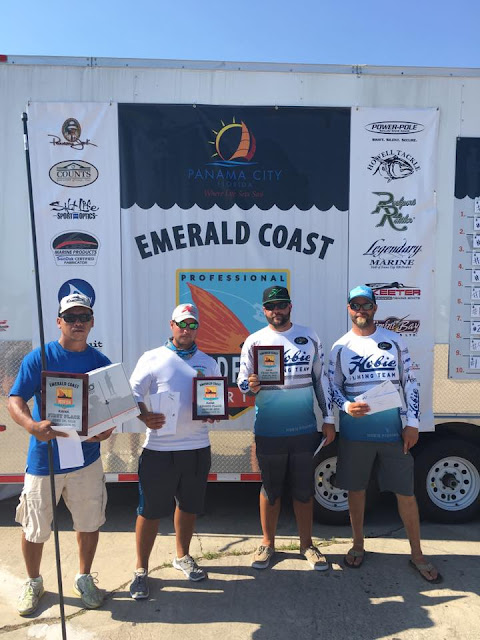 ﻿
Congratulations to the winners of the 2nd event of the 2016 Emerald Coast Professional Redfish Series. Marty pulled off a 5th place finish which has him second going into the Angler of the Year running, only behind Brandon Barton. For more information on this new kayak fishing tournament series, check them out on Facebook or look them up on the web here; Emerald Coast Professional Redfish Series.

I'm crossing my fingers that I can make the September event and hopefully redeem myself. Hell, it can't be much worse than that one. In the mean time, there will be plenty of upcoming trips both inshore to offshore, going for trout to tarpon. What will be next is yet to be determined. Until next time...

For more information on the Gear Used, please click on the logos located on the right side of the page.
﻿
Posted by Richie at 12:50 PM